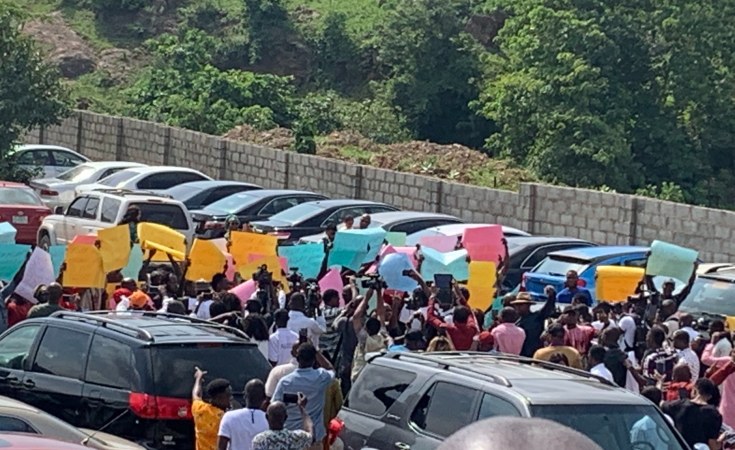 An army of suspected thugs has disrupted a peaceful protest at the Commonwealth of Zion Assembly (COZA) in Abuja.

The suspected thugs were coordinated on Sunday morning near the scene of a sit-in organised by enraged Nigerians against Biodun Fatoyinbo, the lead preacher of COZA now under fire for alleged rape and other sexual transgressions.

PREMIUM TIMES witnessed as a man who identified himself as a member of the church was coordinating a crowd of about 40 young men.

The man (dressed in yellow) took down the names of the protesters in sheets of paper and coordinated them for about 30 minutes before they started displaying placards of their own in support of Mr Fatoyinbo.

The man declined to give his name to PREMIUM TIMES but said he is a member of the church. He also declined to say why he was coordinating a counter-protest to disrupt the gathering that was already underway without any skirmishes.

Mr Fatoyinbo was accused of rape by Busola Dakolo, wife of musician Timi, of raping her when she was a teenage church member.

How I Was Raped By COZA's Pastor - Busola Dakolo

Let Us Talk About Rape