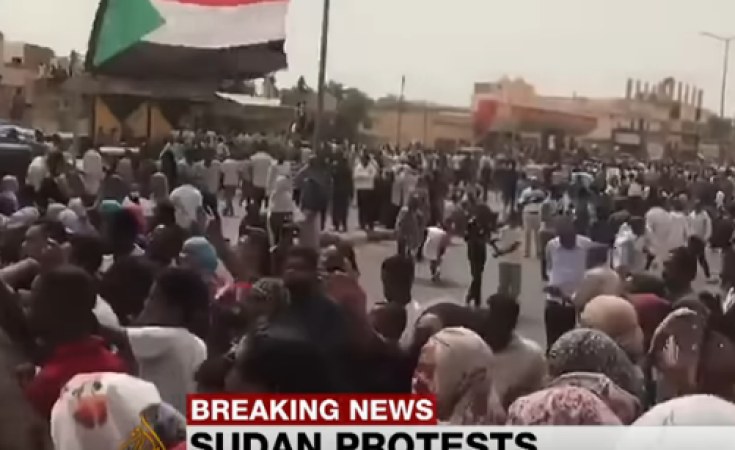 Al Jazeera English/YouTube
Tens of thousands of protesters poured on to the streets of Khartoum and elsewhere as part of mass rallies on June 30, 2019.
Deutsche Welle (Bonn)

There have been reports of sniper fire at mass rallies in Sudan, with at least seven people dying. Large crowds took to the streets across the county to demand democratic rule.

At least seven people died and scores of people were injured at mass protests in Sudan on Sunday. A military leader said snipers were firing at civilians and troops during the nation-wide protest against military rule.

"There are snipers who are firing on people; they shot three members of the Rapid Support Force and five or six citizens," said Dagalo, who is also deputy chief of the ruling military council. "There are infiltrators, people who want to jeopardize progress," he said in televised remarks, pledging to bring the offenders to justice.

Fear of violence ran high in the Sudanese capital, Khartoum, where thousands of protesters were marching towards the country's defense ministry, nearly three months after the military ousted President Omar al-Bashir.

The "million-man" march -- a protest against Sudan's ruling generals -- is seen as a test for protest organizers who said that security forces used live rounds to disperse a sit-in on June 3.

Sudanese people are out in big numbers on the streets of Khartoum, Omdurman and Bahri. Sudanese journalist Alsanosi Adam told DW: "There is a massive deployment of police officers, paramilitary Rapid Support Forces (RSF) and security forces."

Earlier, police fired tear gas at protesters as crowds gathered for the rally, according to witnesses cited by the Agence France-Presse news agency. Reuters reported security forces "firing shots in the air."

Security forces raided the offices of one of Sudan's main opposition groups, the Sudanese Professionals Association (SPA), the group said late on Saturday, forcing it to nix a press conference ahead of major protests.

The SPA and the military have clashed repeatedly in recent weeks, disagreeing over the timeline for a transition to democracy after the protest movement ousted al-Bashir. Since talks between the two groups broke down earlier this month, a violent crackdown has killed at least 128 people across the country, according to protest organizers.

Demonstrators have repeatedly accused the military of attempting a power grab.

"This represents a violation of liberties that is even worse than the regime of the former president," SPA spokesman Ahmed al-Rabie told the Reuters news agency after the raid on its offices.

"This is a bad sign for the atmosphere of mediation between the two parties."

'We Will Continue Our Protests Until the Military Yields'

Sudan's Al-Bashir Charged Over Killing of Protesters
Tagged:
Copyright © 2019 Deutsche Welle. All rights reserved. Distributed by AllAfrica Global Media (allAfrica.com). To contact the copyright holder directly for corrections — or for permission to republish or make other authorized use of this material, click here.