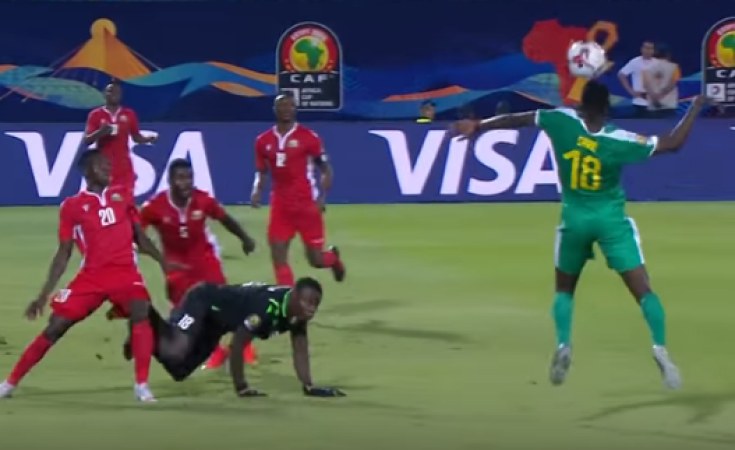 On Thursday last week, cries and screams of joy rent the air in most Kenyans homes and entertainment joints as enthusiasts of the ongoing elite African Cup of Nations football tournament going down in Egypt cheered Kenya's team against our next-door neighbours to the south, Tanzania.

The match was entertaining and the result amazing and fulfilling. Although Tanzania drew first blood in the early period of the match, the legendary Harambee Stars regrouped and defeated them all the same.

Harambee Stars eventually made it 3-2 against Taifa Stars.

All eyes are now on the match between Harambee Stars and Senegal's Lions of Teranga, which is slated to be played on Monday.

The two teams -- Kenya and Senegal -- have shown amazing capabilities on the pitch with the Senegalese having been thrashed 1-0 by Algeria in their group match.

Kenya had been beaten by Algeria, too, but tonight's match is what is keeping Harambee Stars coach Sebastien Migne on tenterhooks.

It is in this match where the fate of Harambee Stars in the premier continental tournament will come to the fore -- whether they will qualify for the knockout stages or not.

On the scoreboard, Kenya now ties with Senegal in the number of points. Both teams have a similar tally of clean three points, having played two matches each.

Football pundits predict that if Harambee Stars draw in the match, they are good to go.

Kenya forward "Engineer" Michael Olunga has shown an undying devotion to their bid to quench the thirst of many football fans in this country, particularly after he scored the thriller scissor goal against Tanzania in the Thursday night clash.

The Kenyan football fraternity now look to the oncoming match with the hope of a tangible performance by the team to progress in the tournament.

All we can do as a family is pour out in large numbers and support our team. We ought to motivate the players and technical bench both socially, financially and emotionally.

Harambee Stars must enter the stadium with the understanding that their opponents are an international team with strong players who turn out for international clubs and is a force t reckon with on the continent.