The Economic Community of West African States (ECOWAS) Heads of States and Government have noted an increase in economic growth in the West African region due to a surge in agricultural input and investment in infrastructure.

In the communiqué of the closed door meeting by members states during the ECOWAS Summit of Heads of State and Government, it noted that economic growth increased to 3.1 percent in 2018 with a projection of 3.4 percent in 2019.

The commission also mentioned the progress in implementing the single currency and revealed that the adopted single ECOWAS currency had been named ‘ECO.’

The new chairperson of the Authority, President Mahamadou Issoufou also said, according to the revised roadmap, the single currency will be issued in January 2020.

In terms of the insecurity plaguing the sub-region, an Extraordinary Summit on terrorism has also been scheduled to hold in Burkina Faso to review the initiatives taken thus far and decide on a priority intervention to curb the spread of the attacks across the West African region. 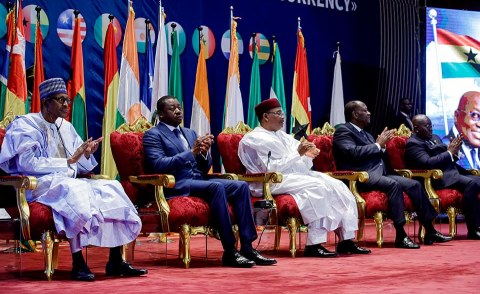 West African States Mired in Controversy Over 'Eco' Currency
Tagged:
Copyright © 2019 Daily Trust. All rights reserved. Distributed by AllAfrica Global Media (allAfrica.com). To contact the copyright holder directly for corrections — or for permission to republish or make other authorized use of this material, click here.