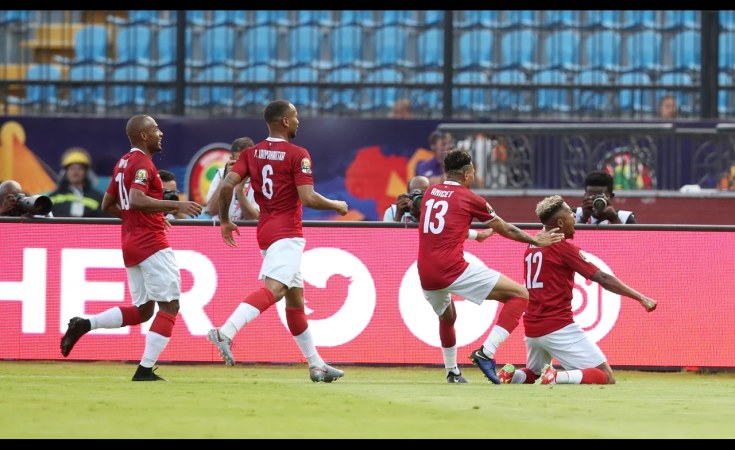 Separated by 63 places in FIFA's latest ranking, the Super Eagles of Nigeria were knocked off their exalted perch by the Barea of Madagascar on Sunday.

The victors have taken over the leadership of Group B heading into the round of 16 of the 2019 Africa Cup of Nations Cup.

Gernot Rohr rang the changes but he could not have thought the idea would explode so spectacularly - which was what happened.

The Eagles conceded a goal in each half to lose to Madagascar 0-2.

Here are the players' ratings for the Super Eagles.

Ikechukwu Ezenwa90Ezenwa would rue his inclusion in this shambolic performance though he was not at fault for any of the two goals.6/10

Chidozie Awaziem90Showed why he is not a specialist fullback. Got involved in attacks down the left flank but could not help deliver the crosses that would have created goals for the forwards.5/10

William Troost-Ekong90Reinstated with his preferred defensive partner and he showed why Rohr will start him and Kenneth Omeruo in the next match. 5/10

Leon Balogun90At fault for the first goal after backing away from a pass from John Ogu. Could just have lost his place in the starting 11 as Rohr looks at the video and decides his recovery is suspect.3/10

Ola Aina90Was a bit subdued in his attacking forays and was a bit jittery in his tackles.5/10

John Ogu45Got his chance but Ogu just could not drive the team forward as much as he would have liked. Paired with Mikel, the central midfield looked totally ponderous.4/10

Mikel Obi ©59The energy is missing and his positional sense looked suspect until he was pulled off. Mikel's authority on the Eagles' overall game seems to be waning and he may have to start from the bench going forward. 5/10

Oghenekaro Etebo90The Stoke City man did all he could to lead the fightback - probing with passes and runs but it was not just good enough on the day.6/10

Ahmed Musa 90Musa had the best chance to draw the Eagles level but took one touch too many though he looked dangerous when he was running at the defenders. If he can get his first touch right then Musa will become more clinical.6/10

Samuel Kalu 73Kalu is undoubtedly very talented but the sooner he starts playing for the team and not for himself, the better it will be for his career. Lost too many balls and fell over at the slightest nudge, negating his team's forward forays.4/10

Odion Ighalo88Ighalo still divides opinions on his end product and against an inexperienced Madagascar back line, he did not show his experience and killer instinct. Was a bit too satisfied with getting free kicks without hurting the opposition.6/10

Alex Iwobi31Iwobi tried his best to inject more creativity into the offensive display of the Eagles.5/10

Moses Simon17Tried to be more direct but his crossing let him down. 4/10

Rohr would have learned more from this defeat and some of his players than in the two earlier victories. Now needs to sit down and use his best 11 for the remainder of the tournament.5/10