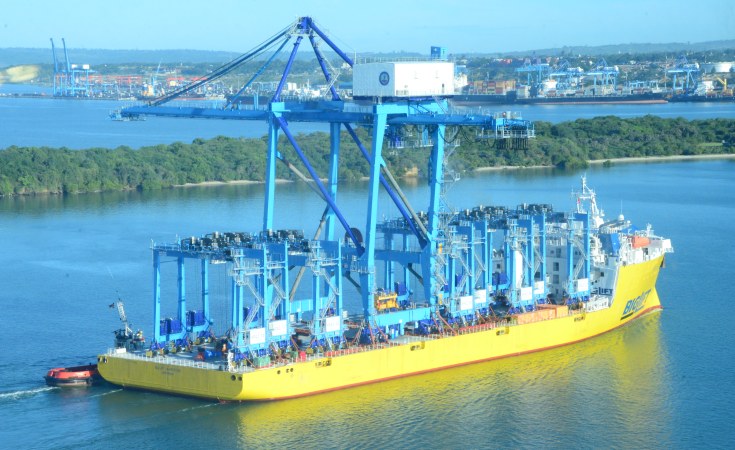 Nairobi — Kenya and South Sudan have reached a deal to deepen their trade ties including a plan for Kenya to hold a trade expo in Juba in November.

Kenya has also agreed to allocate land for a dry port to South Sudan at the Naivasha Special Economic Zone and for a logistics hub near the new Lamu Port.

Further, the two countries have agreed to set up a joint border commission for the management of the common border between the two East African nations.

The agreements were announced today at State House, Nairobi, after bilateral talks between President Uhuru Kenyatta and his visiting counterpart from South Sudan.

"To further ease the movement of goods consigned to South Sudan, the Kenya Government has set aside 10 acres of land at the Inland Container Depot in Naivasha Industrial Park, for use as a dry port by the Government ofSouth Sudan," said President Kenyatta when he addressed a joint press conference with President Salva Kiir.

The President made the revelations as he assured South Sudan that Kenya is fast tracking the completion of the LAPSSET projects, including transnational highways, Oil Pipeline and the Lamu Port, among others, to link the two countries.

"The first berth (of the Lamu Port) will be ready this August while Berths 2 and 3 are expected to be completed within the year 2020. I will invite Your Excellency, with other regional leaders, to inspect the Lamu Project in due course," said President Kenyatta.

"In pursuit of our shared vision to deepen further our cooperation, it is important we fast-track the implementation of the LAPSSET Corridor Highway, that is, from Lamu-Garissa-Isiolo-Lokichar-Lodwar-Nadapal-Kapoeta-Torit-Juba," he said.

In further efforts to deepen trade ties, President Kenyatta announced that Kenya will hold a trade expo in Juba this year.

He said the trade expo, while deepening trade ties between the two neighbouring nations, will also work as a show of confidence in South Sudan's economy.

"The Expo will not only showcase Kenyan products but also reciprocate by exposing South Sudan's products to Kenyan business people," said the President.

The two leaders also said that they have initiated efforts that will guide amicable resolution disputes that may arise over the shared border and announced that a ministerial team has concluded an MOU on delimitation and demarcation of common borders.

"The framework will provide the necessary guidelines for engagement on boundary matters, which, in the spirit of brotherhood and in recognition of the deep friendship between our States, will always be amicable," said President Kenyatta.

The Kenya leader also said that South Sudan's stability was a major concern for Kenya and that he would use Kenya's voice to urge more nations to support the ongoing peace process in the country.

He said the Revitalized Agreement on the Resolution of the Conflict in the Republic of South Sudan, if fully implemented, will benefit the entire continent and not South Sudan alone.

On his part, President Kiir said that the South Sudan government was happy with President Kenyatta's assurance that Kenya will use its influence to support the implementation of the peace accord.

"We are delighted that you have assured us that Kenya will exert more pressure for the implementation of the peace accord," said President Kiir, who is in the country for a two-day state visit.

President Kiir was received at State House earlier in the morning at an elaborate ceremony that included a 21-gun salute.

They also witnessed the signing of several memoranda including the Agreed Minutes of the Inaugural Session of the Kenya-South Sudan Joint Commission of Cooperation.

Also signed were MoU's for Political Consultations and for Joint Commission for Cooperation.