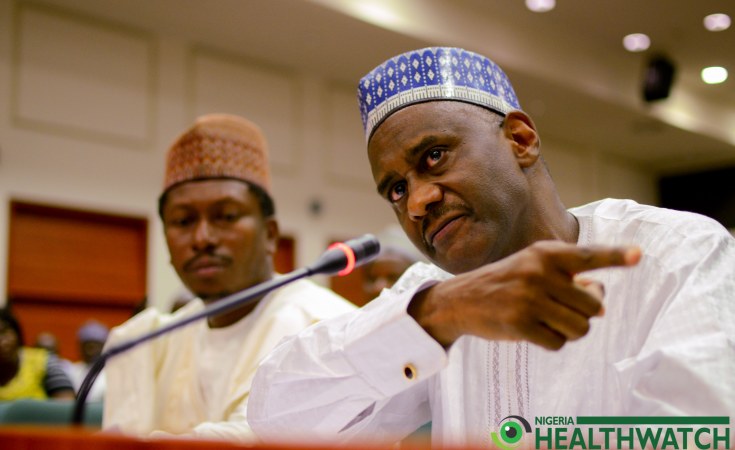 This is coming ten months after he was suspended from office by the governing council of the agency.

The governing council is empowered by the NHIS Act to oversee operations of the scheme. Mr Yusuf has been on administrative leave since October 2018.

The ministry of health, in a press statement signed by its director of media, Boade Akinola, said the termination of Mr Yusuf's appointment was based on the recommendation of a panel of enquiry which had been set up to investigate some of his activities while in office.

Mr Buhari has approved the appointment of Mohammed Sambo as the new Executive Secretary of the agency.

Since the suspension of Mr Yusuf, the agency has been headed by an acting ES, Sadiq Abubakar.

The health insurance scheme has been facing leadership crisis and also shrouded in controversies since the appointment of Mr Yusuf.

Before the termination of Mr Yusuf's appointment, he had been suspended from office twice.

Mr. Yusuf, 54, took over the state-run health insurance provider on July 29, 2016 but his reign at the agency was bedevilled by controversies.

The executive secretary was previously suspended by the Minister of Health, Isaac Adewole, in July 2017 over an alleged gross misconduct and fraud.

Thereafter, Mr Adewole asked a panel to investigate the allegations against Mr Yusuf.

Documents in possession of PREMIUM TIMES revealed that the panel indicted him and recommended sanctions.

In February, however, without informing the minister and against the recommendations of the probe panel, President Buhari reinstated the official, who has always pleaded innocence.

A few months after, Mr Yusuf was again suspended, this time by the governing council of the NHIS.

Ironically, both suspensions were within a year.

Mr Yusuf, a professor of hematology /oncology and bone marrow transplant, was accused of flouting laid down rules.

PREMIUM TIMES had reported how the infuriated chairperson, NHIS Governing Council, Enyantu Ifenne, said "if President Muhammadu Buhari knows a tenth of the 'atrocities' committed by the suspended Executive Secretary, Usman Yusuf, he (Buhari) will throw him out."

Mr Yusuf was also not well-liked by some staff at the scheme.

The Abuja head office of the scheme was thrown into jubilation following the announcement of the suspension Mr Yusuf by the council.

The workers had accused him of running the agency with an 'iron fist' for the two and a half years he held sway.

As a result of the crisis, Mr Buhari had ordered the embattled ES to go on an indefinite suspension while an independent panel of enquiry had been set up to investigate him.

According to the statement, Mr Buhari authorised the termination of Mr Yusuf's appointment "based on the recommendation of the panel".

" Following the recommendations of the report by the Independent Fact Finding Panel on National Health Insurance Scheme (NHIS), Mr Buhari has approved the termination of the appointment of the of the Mr Yusuf who has been on administrative leave," the release said.

The president also approved the dissolution of the Governing Board of NHIS.

He has directed the permanent secretary of the ministry of health "to exercise full powers of the council pending the constitution of a new board."

Also, Mr Buhari has re-appointed Chikwe Ihekweazu as the Director General of the Nigeria Centre for Disease Control.

Mr Ihekweazu had resigned his appointment last week following the expiration of his tenure.

However, Mr Buhari has now reappointed him to continue at the helm of the agency's affairs.

Mr Buhari said the reappointment of Mr Ihekweazu is in line with the provisions of section 11(1)(3) of the Nigeria Centre for Disease Control (Establishment) Act, 2018.

How Usman Yusuf Was Dismissed As NHIs Executive Secretary

Nigeria's Health Insurance Scheme Boss Suspended Again
Tagged:
Copyright © 2019 Premium Times. All rights reserved. Distributed by AllAfrica Global Media (allAfrica.com). To contact the copyright holder directly for corrections — or for permission to republish or make other authorized use of this material, click here.