Kenya: Fuel Siphoning on Highway Blamed on Police and Cartels 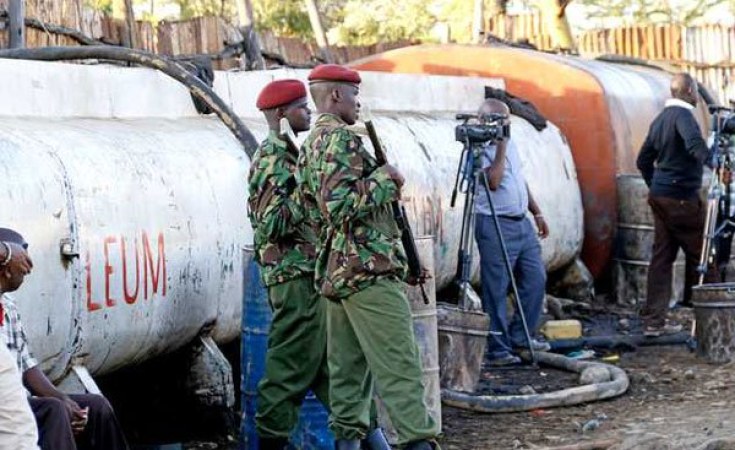 A few minutes to noon, just metres from Total Petrol Station near Kenya Pipeline Company in Nakuru, the hooting of trucks mutes noise from a group of young men on either side of the road.

Every man has a 20-litre jerrycan. One also has a hose pipe. They talk and make calls, deceivingly appearing idle.

Soon, a lorry heading in the general direction of Nakuru town stops on the left side of the road. The men on the other side of the busy road cross to join the rest before "business" begins. The one with the pipe inserts it into the tank of the truck and begins sucking out the fuel.

He then removes the end of the pipe that is in his mouth and inserts in his container.

The pipe is the magic wand that gets the fuel from the tank even when the truck is on a flat surface.

A few kilometres away, another group of youths with containers wanders around, talking to lorry crews.

Soon, they walk away with filled jerrycans into a shop at Salgaa shopping centre.

Fuel siphoning on the Naivasha-Nakuru-Kericho road is not a secret. It takes place even during the day. The Nation team witnessed fuel was being siphoned from two trucks.

Residents say the fuel-siphoning cartels are made up of youths, petrol station owners and county government officials who are protected by rogue police officers.

So open is the trade that the men move from one petrol station to another hawking fuel. It is then sold to unsuspecting motorists.

According to a recent research by Eurocontrol Technics Group, illegal market for fuel globally is estimated to be valued at $133 billion.

The Energy Regulatory Commission estimates that 28 million litres of kerosene consumed every month in Kenya is mixed with either diesel or petrol and sold.

According to some Nakuru residents, the cartels make millions of shillings from the business.

"After getting the fuel from lorries, they mix it with other substances and sell it to mainstream filling stations," a local, who requested anonymity, said.

He added that the cartels have hired young men aged 16-25 who mix and transport the siphoned petroleum products.

It has been a wax and wane business as seasonal police crackdowns temporarily halt the siphoning. Still, the raids are conducted selectively.

One of the young men who asked not to be named told the Nation that the raids are usually conducted on premises whose owners have fallen out with the police or those who do not part with certain amounts of bribes.

In March, more than 20 young men were arrested during a crackdown in Molo, Elburgon and Sachang'wan. They were later released.

Menengai police say fuel siphoning in the area "is a thing of the past".

Nakuru County Police Commander Stephen Matu says he has not received complaints on fuel siphoning since assuming office, adding that he would send his juniors to verify the reports.

Apart from damaging engines and causing losses to owners of the fuel, siphoning has been blamed for the high number of road accidents involving lorries and public service vehicles on the Nairobi-Busia road.

Many accidents, according to Molo police traffic boss Moses Nderitu, result from trucks being driven on free gear.

"They engage the gear in order to save on fuel after selling their stock. They use the wrong lane and end up hitting oncoming vehicles," Mr Nderitu said.

Kenya Motor Repairers Association says adulterated fuel causes blockage to the steam through which the fuel is supplied to the engine.

It also leads to the engine producing unusual sounds.

Adulterated fuel collapses the capacity of the filter to stop dust from circulating into the inner parts of the engine, the association added.

Three years ago, Evans Kamau was arraigned for storing petroleum products without a permit. He was freed on a Sh200,000 bond with surety.

Police Unearth Another Multimillion Oil Racket at Kenya Pipeline
Tagged:
Copyright © 2019 The Nation. All rights reserved. Distributed by AllAfrica Global Media (allAfrica.com). To contact the copyright holder directly for corrections — or for permission to republish or make other authorized use of this material, click here.