Kenya: Over 2 Million at Risk of Starvation 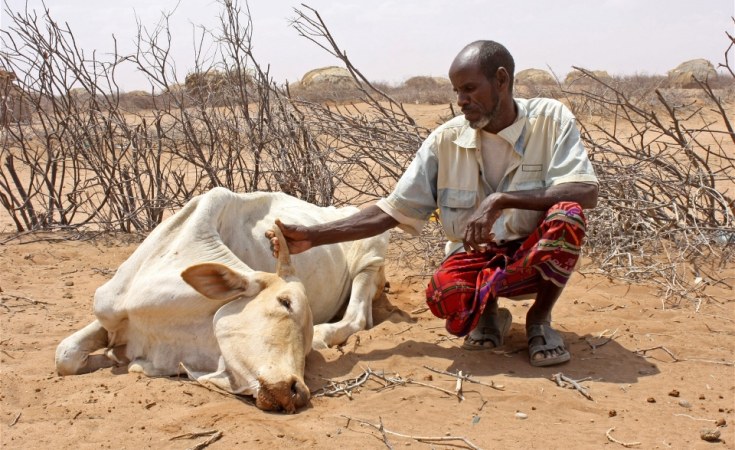 More than two million Kenyans are staring at food crisis in July as the effects of a drought that hit food production and led to increased prices continue to bite.

This comes even as the country's grain reserves dwindle, with its less than a million tonnes stocks expected to run out in two weeks.

Out of the country's 47 counties, Turkana, Marsabit, Baringo (East Pokot), Wajir, Garissa, Tana river and Isiolo will be the most affected, and in dire need of quick intervention.

According to the National Drought Management Authority (NDMA), in its latest report, Kenyans who will require food assistance will top two million this month, up from 1.6 million in May.

"The overall food security situation in the Asal (arid and semi-arid) counties deteriorated in May 2019 with more households in crisis phase," said the agency in its latest report.

This comes even as fears emerge on the after-effects of the drought on the economic prospects, which may slow down growth.

In May, Central Bank of Kenya Governor Patrick Njoroge had warned the drought may lower this year's economic growth to 5.9 per cent compared with earlier forecasts of 6.3 per cent.

A similar drought two years ago caused economic growth to slow to its weakest pace in more than five years.

"A delayed start to our rainy season this year could shave as much as 0.4 per cent off forecasted growth. We are not talking drought like we had in 2017 because the rains eventually arrived, and the question now is, are they adequate?" asked Mr Njoroge.

CBK had forecast the same growth rate for this year, but the first season rains, which usually start in March, did not come until late April and have slowed down, making them inadequate for food production.

The agency said the food situation had worsened, making Kenya's inflation accelerate to the highest rate of 6.6 per cent in close to two decades.

"The crop across the country was affected by the delayed, poorly distributed and cumulatively below-average March-to-May long rains. The below normal rainfall performance coupled with poor temporal and uneven distribution has affected crop production in the agro-pastoral and marginal agriculture livelihood zones, with all areas reporting expected production of less than 40 per cent," said NDMA in the report.

Kenya is also now angling to open the import market, targeting to bring in more than 1.3 million tonnes of maize starting this month, which will be more than double the country's previous purchase. Already, it had reached out to Tanzania in late June for the purchase of more than a million bags of maize.

"The government has plans to lift the duty on maize imports in July and allow importation of maize into the country in order to improve the supply of the commodity in the face of dwindling national stocks. Upon arrival, these stocks will help moderate prices nationally and stop the upward trajectory and if sustained change it to a downward trajectory preferably to within or below the five-year averages," it said.

Agriculture Cabinet Secretary Mwangi Kiunjuri said: "I gave the Cabinet my advisory on this in May and we await their decision."

In 2017, the government allowed millers to import maize to curb the rising cost of flour that had hit a high of Sh153 per two-kilo packet.

In the last three months, the country has also seen maize prices rise by more than 23 per cent amid a tight supply, sending flour prices to Sh124 per 2kg bag. According to the agency, these prices are up to 12 per cent above the five-year averages.

According to the State Department of Agriculture, maize crop yield across the country was affected by the delayed, poorly distributed and cumulatively below average March to May long rains.

Outside of the rains, the fall armyworm infestation was reported in April and May and affected maize that was in the emergent and vegetative stages, but the recent rains have helped control the infestation and also drive the recovery of the previously infested crop.

"It is now expected that improvements in crop conditions are anticipated especially in the western and Rift Valley parts of the country," said the report.

The threat or real importation of maize from regional and international sources like Zambia, Mexico and Ukraine are also expected to put the maize prices domestically on the edge.