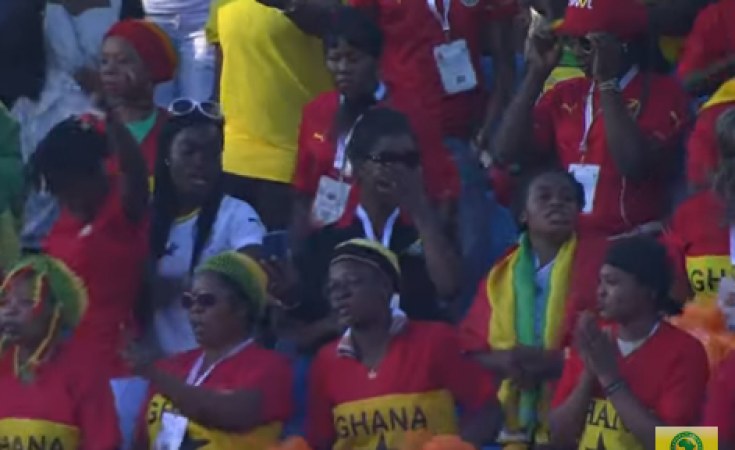 GHANA'S avowed bid to win this year's African Cup of Nations and break a 37-year-old hoodoo, is still on despite garnering only two points from two games in the campaign.

It has been a thorny undertaking so far for the Black Stars after being held to a scorching 2-2 drawn affair by Benin's Squirrels on opening day in Group F, and later playing a tense stalemate with defending champions Cameroon at the weekend.

Lying third on the log at the moment was not what the bookies bargained for the Stars. But that is the attention-grabbing reality now - as Ghana plunges into a blistering battle at the Suez Sports Stadium with unsung Guinea-Bissau in the nation's quest to secure a spot in the Round of 16.

Known as the African Wild Dogs, the Guineans slumped 0-2 to Cameroon but managed to inject some life into their flaking campaign by holding Benin to a grueling barren fight.

Against their two opponents, Guinea-Bissau exhibited some guts and created some few chances of their own - but lacked the experience to rupture the backline. But they can still be a lethal package of venom when let loose.

With a record of three defeats and a draw in five games in the tournament's history, Guinea-Bissau coach Baciro Cande would also be looking for a breakthrough and could be pinching his hopes on Piqueti Djassi and Pele who were sparkling for a side that has half their squad based in Portugal.

Attacking midfielder Sori Mane and striker Joseph Mendes always look dangerous in their raids. A stunning win over Ghana would grant them an unforgettable place in history as well as visa into the next stage of the competition.

That notwithstanding, Kwesi Appiah's charges appear hungrier for the onerous challenge ahead and know they would have to take their destiny into their own hands by pounding Guinea-Bissau in Suez this afternoon.

Appiah has come under amperage of public criticism about his tactics since day-one and he is all-too aware he must explore deeper into his reservoir and pluck the much-needed winning character ahead of today's must-win game. Of course, by now the Stars' sweat-merchant should know of the repercussion of sharing the spoils.

On Sunday, Madagascar produced one of the most charming fairytales of the tournament - upsetting the applecart in Group B by beating towering favourites Nigeria 2-0 to top the group on seven points. It is a hard-to-believe result.

Perhaps, that is enough grim manifestation of the fact that African football is of age and one can underestimate one's strength at one's own peril.

It is the reason the Stars must dash for the kill - combining defensive solidity with attacking flair to grind the desired result.

Though they have conceded only two goals in the campaign, the Guinea-Bissau outfit have not shown enough sturdiness at the back and could be punished cruelly by any razor-sharp forwardline. It is expected that Coach Appiah would parade such starving forwards to deliver the goods.

The Stars will be missing the services of pin-up player Christian Atsu who picked up injury against Cameroon. He is said to be improving steadily and might not be available for selection. But that should not take too much away from the team whose young burgeoning midfielder Samuel Owusu looks like a player with great potentials.

Gallingly, Thomas Partey, Wakasu Mubarak and Atsu himself - before his regrettable exit, have not yet marched to the party. Their ferocious nature appeared to have been placed on 'ice' and could only be thawed out with a cracking performance under the sweltering heat of Suez.

And, Partey agrees perfectly with the assertion.

"We are a team and we play as a team. Things didn't go well for me personally (against Cameroon). I tried to help with whatever I can and I'm happy with the performance of the team. Now we have to focus on our next game," he said.

So far, attacking midfielder and skipper Andre Ayew has played a yeoman's game, occasionally falling deep for defensive duties. That style may not alter today. What may change is personnel, as strong central defender Jonathan Mensah has also been declared unfit. Ghana may, therefore, depend on John Boye (after his suspension) to partner debutante Joseph Aidoo, in central defence.

The Ghanaian coach may have been a confused bunch at the moment as he plots his attacking armada -especially with general captain Asamoah Gyan's eagerness to be given a starting role. He was such a big influence after coming on in the last-quarter or so in the Cameroon game.

Striker Jordan Ayew, Ghana's second goal-scorer in the tournament, has not fared badly either but may have to raise his game a notch higher. Many also think substitute forward Kwabena Owusu, whose right-footed thunderbolt exploded off the Cameroon upright late in the game, should be given a look-in much early. Others, too, are craving for Trabzonspor striker Caleb Ekuban to be introduced.

Indeed, Ekuban capped his debut for the Stars, with a magnificent finish against Kenya - a full-of-life goal that powered the Ghanaians to the top of Group F in the AFCON 2019 qualification.

He again 'tortured' the net in Ghana's friendly against Mauritania at the same venue - Accra Sports Stadium, making it two goals in two games. Some say he is the expected messiah; a solution to the nation's goal drought.

It was such an imposing performance, gratifying to Gyan himself, who reportedly fought for the lad to be part of troops for the Egypt AFCON.

Doubtless, Appiah must have been caught in a very intricate situation. He needs to line up a formidably remorseless forward line to pump home the much-needed goals - at all cost - and tame the African Wild Dogs, in their very first meeting. Ghanains are hugely expectant!

Being played simultaneously, Benin will also be chasing for the result against leaders Cameroon, hoping to upset the defending champions and put themselves in great position for last-16 qualification.

Here's Your AFCON Top 16!
Tagged:
Copyright © 2019 Ghanaian Times. All rights reserved. Distributed by AllAfrica Global Media (allAfrica.com). To contact the copyright holder directly for corrections — or for permission to republish or make other authorized use of this material, click here.