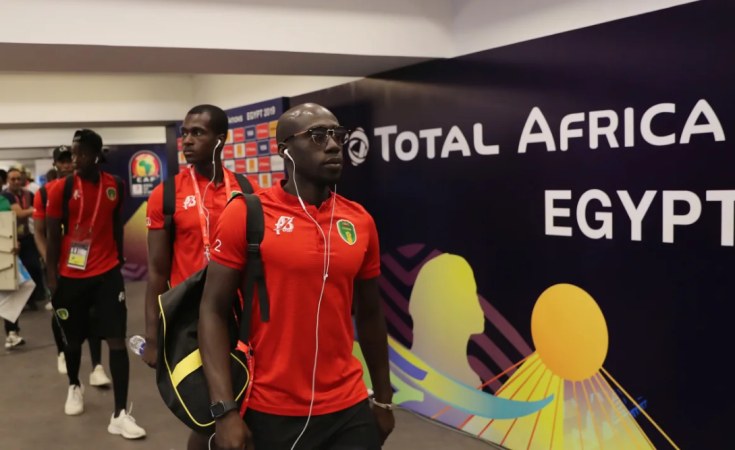 CAF Online
Debutants Mauritania are hoping to produce one of Africa Cup of Nations biggest shocks ever when they take on Tunisia in Suez.
Confederation of African Football (Giza)

Debutants Mauritania are hoping to produce one of Africa Cup of Nations biggest shocks ever when they take on Tunisia in Suez on Tuesday (2 July 2019). Angola faces Mali in Ismailia in a simultaneous kickoff.

Mali leads the Group E pack with four points, followed by Angola and Tunisia who has two points each. Mauritania follow in that order with a lone point.

Despite being the favorites to win the group, Tunisian Carthage Eagles started the campaign in an unconvincing matter, managing only two draws against Angola and Mali in their first two games. Meanwhile debutants Mauritania won their first ever AFCON point holding Angola to a barren draw, after suffering a 4-1 defeat to Mali’s Eagles.

With fellow debutants Madagascar achieving an unexpected win over ranked Nigeria to top Group B, Mauritania’s “Mourabitoune” are dreaming of producing a similar surprise in Suez to achieve a historical second round qualification in their debut AFCON appearance.

Carthage Eagles are favorites to win and reach the eighth finals, but French coach Corentin Martins believes his side have the potential to produce the unexpected.

Tunisia is one of best five nations that represented Africa in the last World Cup. This confirms the qualities of this team but it does not detract us from our desire to have ambitions. We are going to hang on and make sure to achieve qualification. Even if we have 0.5 chance to qualify, we have the potential and the players to get there.

Tunisia is a great team, but after holding Angola, we will do everything to overcome them. I played in the Tunisian league and I am surprised by the performance of this team because I was expecting a higher level. It's a tough group and I'm sure we'll have a great match.

It is very difficult at the moment to evaluate the chances of our team, but the most important thing is to win. And I believe we have the means to do it. Players are aware of the stakes and the pressure of this match.

My teammates and I are aware of this game’s importance. Against Mauritania, we have to do better than what we did against Angola and Mali. We have to play well and win if we want to stay in the competition. The pressure is positive at our level before facing Mauritania and already in the previous matches, we have shown that we are capable of handling it.

Previous Story
Tunisia, Mauritania Play to a Draw at AFCON
Next Story

Tunisia, Mauritania Play to a Draw at AFCON