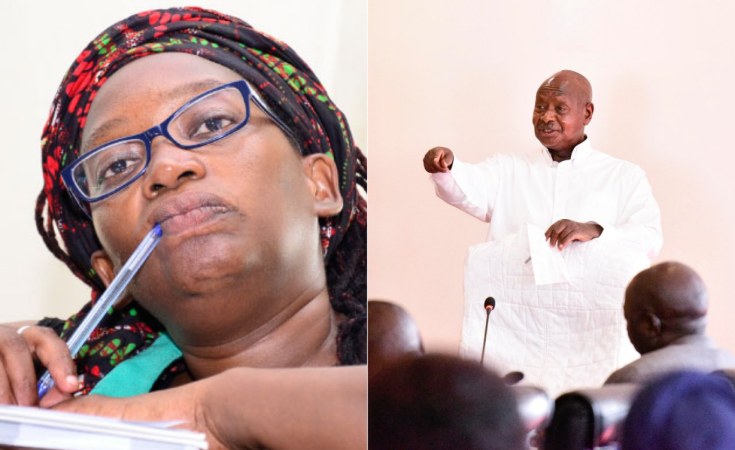 Buganda Road Court Magistrate, Gladys Kamasanyu has refused to summon President Yoweri Museveni as one of the witnesses in the trail of Dr Stella Nyanzi.

Dr Stella Nyanzi's legal team had asked court to summon President Museveni as one of the witnesses in the Stella Nyanzi cyber harassment and offensive communication trial. However, Ms Kamasanyu argued that while the President is a competent witness, court cannot issue a summon compelling him to appear before it. She said she would be acting in breach of the constitution if she accepted the defence's application.

The defence lawyers had earlier protested delays in court, saying it is denying their client justice. The lawyers led by Mr Isaac Semakadde questioned the trial Magistrate Gladys Kamasanyu for not turning up in court as scheduled.

Dr Stella Nyanzi and her lawyers had waited at Buganda Road Court from 9.00AM, but the session kicked-off later in the afternoon. The seemingly angered lawyers led by Mr Semakadde rose up and questioned the magistrate why they had not been notified about the change in schedule.

They also protested against the magistrate's decision to have juveniles out of court before the commencement of the defence submissions, saying she is seemingly prejudging their client. The magistrate apologised for not turning up in court at 9.00AM as earlier scheduled, explaining that the courtroom in which Nyanzi was to appear had been occupied for the video conferencing with suspects at Luziira prison.

The magistrate also defended her decision to have juveniles out of court, saying it was meant to protect them from loutish content.

"It was expected that loutish content would again come up in court as it has been in the past when prosecution made submissions to pin Dr Stella Nyanzi," she noted.

Dr Stella Nyanzi is being prosecuted on two charges of cyber harassment and offensive communication through an alleged loutish poem she posted on her facebook page on the September 16, 2018 with intent to disturb the peace and privacy of President, Yoweri Kaguta Museveni and his mother the late Esteeri.

Stella Nyanzi has been on remand in Luzira prison since November 2018.

Stella Nyanzi Wants Police Boss Summoned As Defence Witness
Tagged:
Copyright © 2019 The Monitor. All rights reserved. Distributed by AllAfrica Global Media (allAfrica.com). To contact the copyright holder directly for corrections — or for permission to republish or make other authorized use of this material, click here.