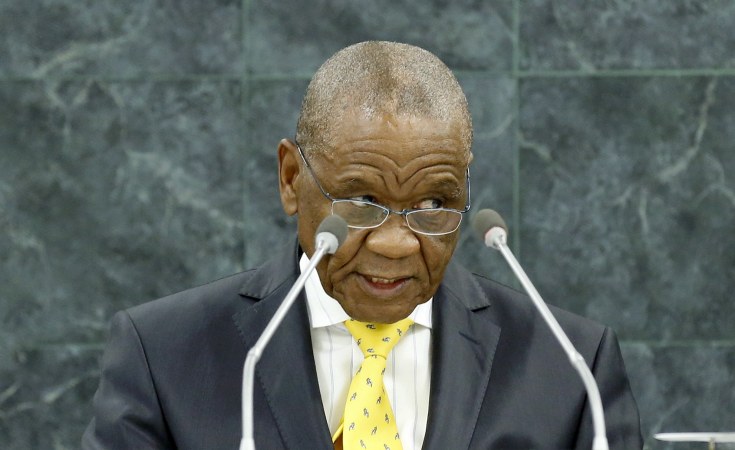 EXASPERATED youths from across the country are planning a massive protests against Prime Minister Thomas Thabane's government over a host of issues that include the administration's high "unjustifiable" spending.

The first of the protests is slated for Monday when the youths under the banner of non-governmental organisation, Transform Lesotho Initiative, intend to picket to the Moshoeshoe I statute where they will hand over a petition to Dr Thabane.

The youths say the government is spending too much on senior officials at the expense of the education sector while it has also failed to create employment.

The protest comes on the back of the government's move to reduce its support for tertiary students. Development Planning minister Tlohelang Aumane recently announced that 25 and 10 percent of first year students at the National University of Lesotho (NUL) and Lerotholi Polytechnic respectively will not receive government sponsorship for the 2019/20 academic year which that starts in August.

Mr Aumane said the funding cut was imposed after the two institutions rejected a government call not to increase tuition fees for the coming academic year. The two institutions are said to have insisted on increments of 10 percent (Lerotholi) and 25 percent (NUL).

Mr Aumane said the government invited all tertiary institutions to discuss how best to accommodate all prospective students on the list of those whose studies would be funded by the government through the National Manpower Development Secretariat (NMDS).

This was after the government cut the NMDS' annual sponsorship budget by M300 million. The government allocated only M590 million to the NMDS in the current financial year down from M890 million in the previous year.

The NMDS uses the money to fund scholarships for students in local and international institutions.

However, the government this week rescinded its decision to cut the sponsorships.

In a statement delivered by the Minister of Education, Professor Ntoi Rapapa this week, the government said it had assigned a ministerial taskforce to announce that government has backtracked on the decision.

"The following decisions have been reached for the 2019/2020 academic year: that there should not be tuition fee hikes in all tertiary institutions where their students are sponsored by government (NMDS)," Prof Rapapa said.

He added, "The government will continue to give scholarship to the same number of students who were sponsored in the last academic and this will be the case in all institutions and programmes."

Nevertheless, this was not before the initial decision sparked an uproar across the country and the Transform Lesotho Initiative has taken upon itself to ensure that the grievances are formally registered with Dr Thabane.

Transformation Lesotho Initiative is a youth oriented non-governmental establishment which fights for the interests of the youths.

The youths had initially planned to petition the premier tomorrow but settled for Monday after a joint meeting with the police and the organisers of the wool and mohair protest march, who also have their own demonstration tomorrow.

"We agreed that we would give way to the wool and mohair farmers to hold their march on Friday and ours has been postponed to 1st of July," Khereng Khereng of Transform Lesotho Initiative told the Lesotho Times this week.

He said they have been granted a permit by the police for the protest.

"The country's high unemployment rate continues to worry us. Thousands of Basotho graduate from tertiary institutions annually yet there are no meaningful efforts to create jobs," Mr Khereng said.

He said the high unemployment rate affects the youths more than the rest of the citizens and cutting government subventions is a double jeopardy for the country's young people.

Mr Khereng said that it was obvious the country's youths will not be able to pay for their fees at tertiary institutions after the recent cuts in support.

He said that the subvention was already low and that cutting it down was going to put more strain on the institutions. He said it was unrealistic for the government to expect the institutions to apply austerity measures while it had dismally failed to do so.

"Cutting the subvention literally puts the higher learning institutions in crisis because these institutions don't have income generating initiatives like others in the region," Mr Khereng said.

He said they were going to petition Dr Thabane over the high unemployment rate while they will separately petition Mr Aumane over tertiary institutions' sponsorship cuts.

Mr Khereng said they would state clear timelines in their petitions and that they were going to keep persisting until such a time that government responds to their grievances.

"If our grievances are not addressed, we will have a series of processions, we will continue petitioning the government until it reverses its decision on the quota of sponsored students. The government can run in deficit, it has a lot of international financial support and there is nothing stopping it from borrowing the M300 million shortfall."

Mr Khereng was however, quick to say that the protest march had nothing to do with the current political efforts to overthrow Dr Thabane and his government.

Dr Thabane is facing a vote of no confidence in parliament and will have his day in the national assembly when it reconvenes on an unspecified date.

The motion was filed by his All Basotho Convention (ABC) Koro-Koro legislator Motebang Koma and seconded by the main opposition Democratic Congress deputy leader Motlalentoa Letsosa earlier this month.

"We are not, in any way, advancing the interests of any political party. Many politicians have come to us wanting to join and be part of this march but we have stood our ground and told them that we don't need their political backing," Mr Khereng said.

He also said while they will allow youths from political parties to join the march, they would not allow party regalia at the protest to avoid diluting their message

Lesotho's Govt Hangs by a Thread
Tagged:
Copyright © 2019 Lesotho Times. All rights reserved. Distributed by AllAfrica Global Media (allAfrica.com). To contact the copyright holder directly for corrections — or for permission to republish or make other authorized use of this material, click here.