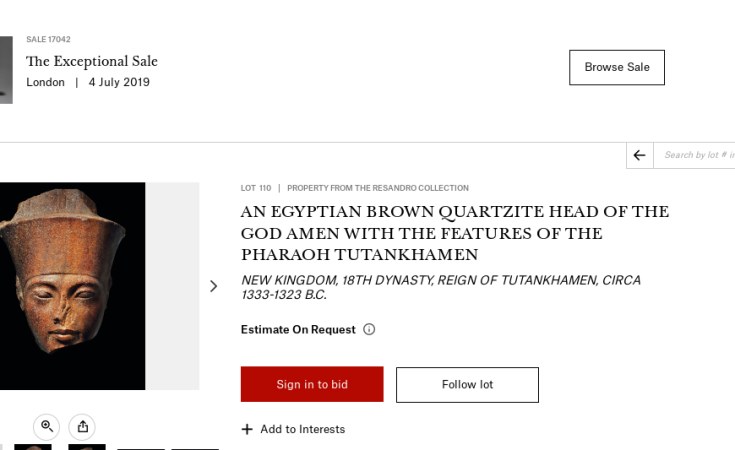 Photo: Screenshot/Christies
An Egyptian head of the God Amen with the features of the Pharaoh Tutankhamen. circa 1333-1323 B.C., sold at Christie's.
Deutsche Welle (Bonn)

Christie's decided to go ahead with the auction amid protests from Egypt's government and despite a small protest outside its London premises. Cairo has argued that the relic was smuggled out of Egypt and is still legally owned by the state.

"I believe that it was taken out of Egypt illegally," Mostafa Waziri, secretary general of Egypt's Supreme Council of Antiquities told the Reuters news agency. "[Christie's] has not presented any documents to prove otherwise."

Where does it come from?

International conventions prevent the sale of objects that are known to be stolen or illegally dug up. Egyptian officials asked the UK Foreign Office and UNESCO to intervene, but such interventions are only made if there is clear evidence to dispute legitimate acquisition.

Christie's claimed it had performed "extensive due diligence" and "gone beyond what is required to assure legal title" of the piece.

According to the auction house, the sculpture came from the private Resandro Collection of ancient art. It had allegedly been acquired from Munich art dealer Heinz Herzer in 1985, who bought it from Austrian dealer Joseph Messina in 1973-1974. The company says a member of German nobility, Prince Wilhelm Von Thurn und Taxis "reputedly" owned it before that.

The last point has been disputed by accounts from his niece and an art historian who told Live Science site that Wilhelm had very little interest in collecting art.

Talking to the AFP news agency from Cairo, former Egyptian Antiquities Minister Zahi Hawass said the statue was likely "stolen" in the 1970s from the Karnak Temple complex just north of the ancient city of Luxor.

"We think it left Egypt after 1970 because in that time other artifacts were stolen from Karnak Temple," Hawass said.

A crowd of some 20 protesters gathered in front of Christie's on Thursday, holding up placards saying that "Egyptian history is not for sale."

"We are against our heritage and valuable items (being) sold like vegetables and fruit," said Ibrahim Radi, a 69-year-old Egyptian graphic designer protesting outside Christie's. 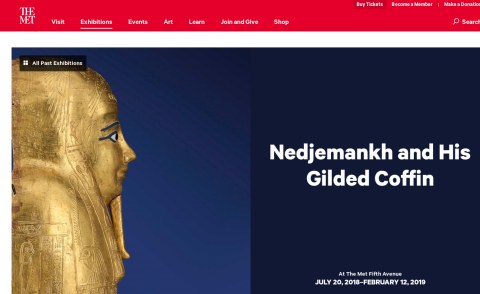 Stolen Gold Coffin of Ancient Priest Returned to Egypt
Tagged:
Copyright © 2019 Deutsche Welle. All rights reserved. Distributed by AllAfrica Global Media (allAfrica.com). To contact the copyright holder directly for corrections — or for permission to republish or make other authorized use of this material, click here.