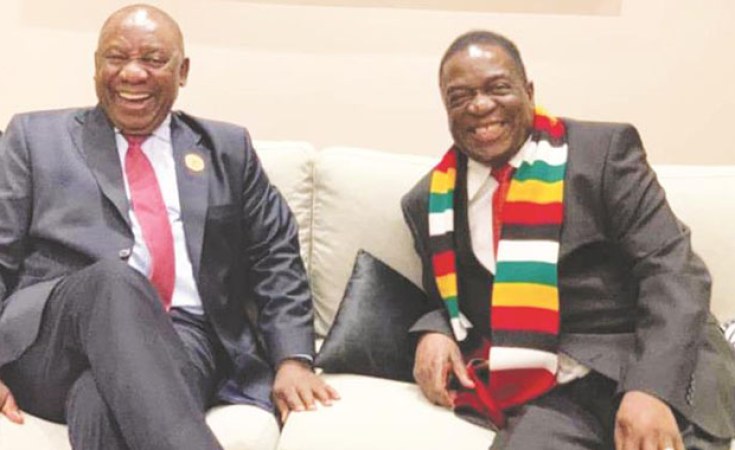 The Herald
Zimbabwean President Emmerson Mnangagwa, right, with his South African counterpart Cyril Ramaphosa on the sidelines of the African Union summit in Niamey, Niger on July 7, 2019.
The Herald (Harare)
By Kudakwashe Mugari

The President said Energy and Power Development Minister Fortune Chasi would soon lead a delegation to SA to finalise a new power supply deal, that should ease electricity woes in the country.

"With President Ramaphosa we met and we were sharing challenges we are facing and, in particular energy shortages.

"We exchanged views on how we can deal with that issue. Of course, our Zesa owes Eskom quite a lot of money and they have been able to pay US$10 million last week to reduce that debt.

"This enables them to have discussions and I think our Minister of Energy (Cde Fortune Chasi) will go to South Africa next week to discuss some new arrangements," he said.

The Head of State and Government also said that they discussed the conditions set by the United States of America at the America-Africa Forum in Mozambique recently before unveiling a US$60 billion facility to Africa.

"We interrogated the conditions of accessing that fund," he said.

President Mnangagwa has made it clear that Zimbabwe will not accept the facility since it had strings attached.

On the launch of African Continental Free Trade Area (AfCFTA) by the African Union, President Mnangagwa said it was a success story for Zimbabwe to be part of the process.

He said the AU agreed to give Zimbabwe a 15-year period to retool its industries and commerce that have been brought to their knees by the economic sanctions imposed by the US, Britain and their Western allies.

"For Zimbabwe it was a huge success because we succeeded in depositing our instruments, so we were number 23 and we have managed to get a window to develop our industry and commerce so that we catch up with the rest of the world and we got a 15-year reprieve.

"It has gone very well. We signed the protocol (African Continental Free Trade Area) in Kigali (in Rwanda), but we entered a reservation because of sanctions imposed on us which have rendered our industry and commerce uncompetitive in the market," he said.

Meanwhile, President Mnangagwa and his delegation were expected to arrive home early this morning.

Fuel Prices In Zimbabwe Up Again
Tagged:
Copyright © 2019 The Herald. All rights reserved. Distributed by AllAfrica Global Media (allAfrica.com). To contact the copyright holder directly for corrections — or for permission to republish or make other authorized use of this material, click here.