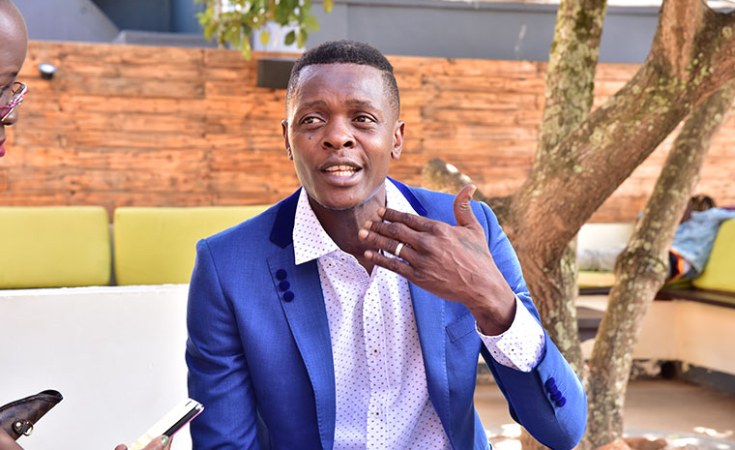 Kyotera — Days after Afro-beat singer Joseph Mayanja aka Jose Chameleon, announced that he had joined the Opposition Democratic Party, police have cancelled his scheduled concerts in Masaka sub-region.

Chameleon was scheduled to stage three concerts in Mutukula and Kalisizo both in Kyotera District and another in Bukomansimbi District at the weekend.

According to Mr Robert Nkuke aka Mutima, one of Chameleon's managers, police told them to secure clearance from police headquarters in Kampala if they are to hold shows in the region. "Usually, it is local police and leaders who clear our shows. We really wonder why this time we are being asked to seek clearance from Kampala," he said on Monday.

He said the crackdown on Chameleon's show started last Friday at Bukomansimbi playground when they raided the venue.

"Revellers had already paid Shs10, 000 as entrance fee but were dispersed by police," Mr Nkuke said.

Last week, Chameleon joined the DP and declared his intention to contest for the Kampala Lord mayoral race in the 2021 General Election.

The singer seeks to unseat Mr Erias Lukwago, who was elected as an Independent candidate in 2016.

Mr Didas Ssenkungu, one of the managers of NG Events, the company that had organised the music shows, says they are willing to fulfil all the police requirement and stage the shows next weekend.

"We incurred a big financial loss and we can only recover that money by organising other shows," he said.

Mr Paul Kangave, the Southern Regional police spokesperson said he needed more time to consult his superiors why the music shows were blocked.

"Give me more time to consult, I wasn't aware about that [Bukomansimbi incident]," he said.

Chameleon's friend and singer -turned politician Robert Kyagulanyi aka Bobi Wine, the Kyaddondo East Member of Parliament has in the past suffered similar fate.

Security agencies have blocked several music concerts he had organised in different parts of the country.

Bobi Wine's trouble worsened when he declared his intention to contest against President Yoweri Museveni, who has been in power for 33 years, in the 2021 presidential race.

Concert organisers are required write to the IGP explaining where they intend to hold shows, how they have reached an agreement with managers and owners of the venues.

Among other requirements, organisers must indicate the number of revellers expected at their concerts.

The IGP warned Regional, District and Division police commanders against providing security for music concerts whose plan has not met the requirements.

Previous Story
After the 'Besigye Hammer' and 'Bobi Wine Whackdown', It Is Chameleone's Turn
Next Story
Speculation as Museveni 'Unfollows' Chameleone on Twitter

After the 'Besigye Hammer' and 'Bobi Wine Whackdown', It Is Chameleone's Turn

Ugandan Singer Jose Chameleone to Run for Mayor
Tagged:
Copyright © 2019 The Monitor. All rights reserved. Distributed by AllAfrica Global Media (allAfrica.com). To contact the copyright holder directly for corrections — or for permission to republish or make other authorized use of this material, click here.