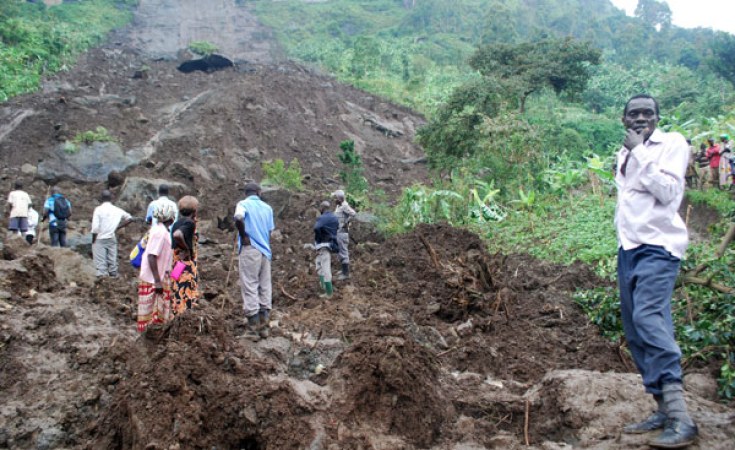 Yahudu Kitunzi/Daily Monitor
Residents at the scene where six people are believed to be buried by landslides.
The Monitor (Kampala)
By Franklin Draku

The European Union has given Uganda €80,000 (Shs334.3m) to help victims of the landslides that recently hit the Mount Elgon region in eastern Uganda.

A statement from EU says the funding will support the Uganda Red Cross Society (URCS) to deliver the urgently needed assistance for families in the affected districts of Bududa, Sironko, Mbale and Butaleja.

Among the items to be provided include tents to families without shelter, basic essential items such as blankets and mosquito nets, healthcare services, access to safe water and awareness raising on preventing waterborne diseases. The Uganda Red Cross will also offer psychosocial support to the families in need, many of whom had to leave their homes.

The donation is expected to benefit up to 2,840 people directly. The statement says another batch of over 125, 000 people in the communities at large will indirectly benefit from the hygiene promotion activities aimed at preventing diseases.

"This funding is part of the EU's overall contribution to the Disaster Relief Emergency Fund of the International Federation of Red Cross and Red Crescent Societies," part of the stamen reads.

Most of the affected people lost their homes, essential belongings, and cropland. Their means of earning a living were also disrupted. The mudslides and floodwaters destroyed safe water and hygiene sources, exposing communities to the risk of waterborne diseases.

Reports from the area say there is currently a cholera outbreak in Bududa, with one registered cholera-related death and twenty-eight suspected or confirmed cases in health facilities.

The European Union is signatory to a €3 million humanitarian delegation agreement with the International Federation of Red Cross and Red Crescent Societies (IFRC) to support the Federation's Disaster Relief Emergency Fund. Funds from the DREF are mainly allocated to "small-scale" disasters - those that do not give rise to a formal international appeal.

The Disaster Relief Emergency Fund was established in 1985 and is supported by contributions from donors. Each time a National Red Cross or Red Crescent Society needs immediate financial support to respond to a disaster, it can request funds from the Disaster Relief Emergency Fund. For small-scale disasters, the IFRC allocates grants from the Fund, which can then be replenished by the donors.

The delegation agreement between the IFRC and ECHO enables the latter to replenish the DREF for agreed operations that fit in with its humanitarian mandate up to a total of €3 million.