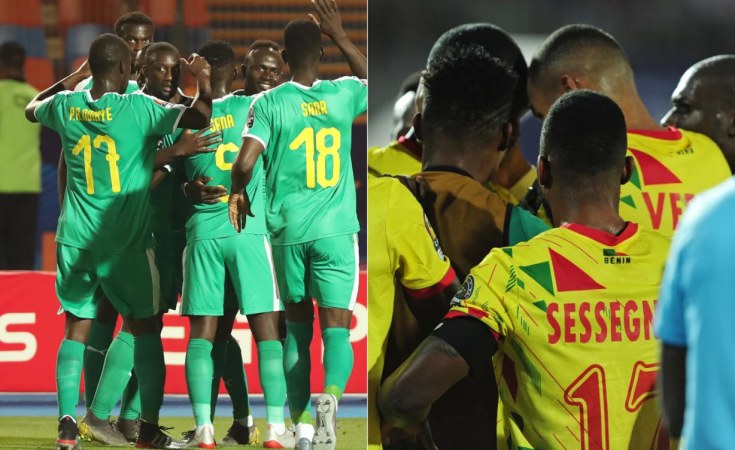 allafrica.com
From left: Segenal's and Benin's national soccer teams at the 2019 AFCON in Cairo.
The Nation (Nairobi)
analysis By Charles Nyende

The round of 16, a packed eight-match four-day programme was full of football drama, unexpected twists in the script and written endings that just did not conclude, exactly what the doctor ordered as far as Confederation of Africa Football is concerned.

The expansion of the tournament to 24 teams had been criticised in some quarters, that it would lower the standards and perhaps lead to some lopsided matches. Far from that, the traditionally considered small teams have had their way even as the regular big boys have their say.

Ranked lowest of the last 16 teams - at 108 in the world -- and given little chance against perennial contestants DR Congo and their star player Yannick Bolasie of Everton, the debuting Madagascar, slayers of giants Nigeria in the group stages, battled to a 2-2 draw in 120 minutes before squeezing to the last eight 4-2 on penalty shoot-out.

As Madagascar coach Nicolas Dupuis talked about them wanting to go as far as they could, unfancied Benin had two days earlier caused a huge upset sending home Morocco, one of the tournament favourites.

Benin, appearing in only their fourth finals, registered their first ever points at this level when they drew with Mozambique in the preliminary stage and then qualified for the knock-out stage for the first time.

Coach Michel Dussuyer has relied on some solid defending and great teamwork. Morocco's exit ended coach Herve Renard's quest for a third title with a third different nation after earlier triumphs with Zambia in 2012 and Cote d'Ivoire in 2015.

A below par Senegal, Africa's top-ranked team, laboured to beat Uganda 1-0 thanks to the strike of Liverpool forward Sadio Mane, the tournament's top scorer with three goals.

Senegal lacked any real fluidity against a Uganda Cranes side the perhaps showed too much respect to the Teranga Lions to mount any meaningful challenge.

By far the most impressive team has been Algeria who crushed Guinea 3-0, no slouches, to all but announce their championship credentials. Desert Foxes coach Djalmen Belmadi has moulded a well-balanced side that has not had to rely on star player Riyad Mahrez of Manchester City. Nine goals from four matches marks Algeria as the team to beat thus far.

Crystal Palace forward Wilfried Zaha, a subject of interest for Manchester United and Arsenal, scored the only goal in Cote d'Ivoire's victory against Mali as the Elephants lumbered into the quarters. They will need to considerably raise their game to have any chance of getting past Algeria.

Tunisia entered the last eight without winning a single game in regulation play while Ghana failed to make the quarter-finals for the first time since 2008.

South Africa, given little chance, showed great tactical discipline, forged by experienced Scottish coach Stuart Baxter, to shock title-hungry Egypt 1-0 and set up an enticing quarters date against an ever improving Nigeria. So disappointed were the home fans, many of them considered Egypt's exit the end of the competition.

Pity for them because the tournament thus far has served up some good contests and unexpected results. The quarters promise plenty more.

Previous Story
Benin Wants Another Fairytale Against Senegal
Next Story

Senegal, Nigeria Through to AFCON Semi-Finals
Tagged:
Copyright © 2019 The Nation. All rights reserved. Distributed by AllAfrica Global Media (allAfrica.com). To contact the copyright holder directly for corrections — or for permission to republish or make other authorized use of this material, click here.