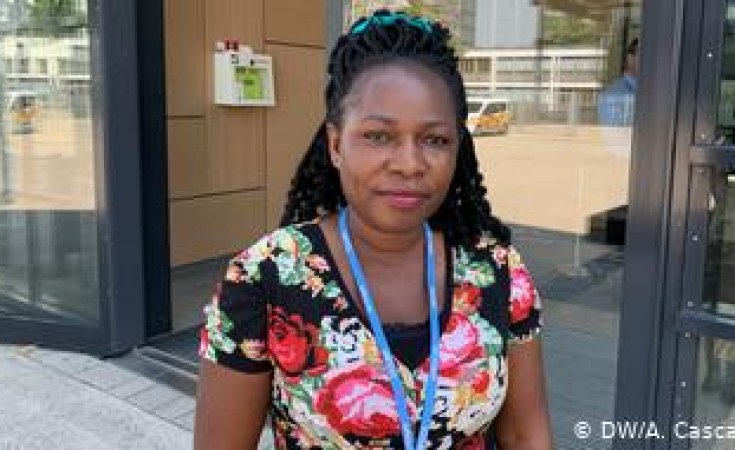 In Germany and large parts of Europe, green parties are compounding their electoral successes. Environmental parties in Africa still have a long way to go, but the climate crisis could quicken their ascent.

"The German Greens are a shining example for us Greens in Mozambique," says Joao Massango. The 47-year-old is the president of the "Partido Ecologista - Movimento da Terra" (PEC-MT), which specializes in environmental issues. But unlike the German Greens, the PEC-MT has not been able to send a single member to parliament since it was founded in 1997. "We have of course noticed that our German friends are on the upswing. And this success of the Greens in Germany, but also in other European countries spurs us on," Massango told DW.

In Mozambique, as in most African countries, environmental protection plays a minor role for voters, the politician says. Most people are concerned with what they perceive as being more important issues: Work, health, safety, and education. "When we mention environmental protection to the people, they think it is just this great utopia," said Massango.

Mozambique: Many environmental problems, few votes for the Greens

Mozambique is particularly exposed to environmental risks due to its geographical location. The country regularly suffers from extreme droughts, but also from tidal waves or hurricanes and cyclones, such as the one that destroyed parts of the country in mid-March. Cyclone Idai and Cyclone Kenneth struck just six weeks apart, flattened cities and villages and, in the case of Idai, which crashed into Mozambique's central region, prompted devastating floods in one of the worst weather-related disasters to hit the southern hemisphere.

Hundreds of people were killed and thousands are still homeless. "In fact, people in my country should be burning for environmental issues," Massango said. But his deep commitment to the cause as expressed in his election campaign was not rewarded in the parliamentary elections of 2014.

A geographer by profession, Massango says he is not about to give up. His goal is to win at least one parliamentary mandate for his party in elections coming up next October: "Environmental protection and the fight for the climate are and remain the topics of our time. We do not want to go on being extras. We want to have a say when it comes to the future of our country and our planet."

Green parties elsewhere on the African continent have not yet been able to celebrate major political successes too. But African Greens aim to change the situation with the help of intensive international networking and cooperation. Global Greens, the umbrella organization of the green parties worldwide, now has 22 green parties from Africa, including Joao Masango's PEC-MT. The aim of the organization is to promote green policies all around the world.

Dorothy Nabulega, the spokesperson for women's policies of the Ecological Party of Uganda (EPU), told DW that green parties worldwide are like a big family: "When one green sister party celebrates success in another country, everyone else is encouraged. We also fight hard to get into parliament encouraged by the success in other countries."

No broad green movement in Africa as yet

Why is the success of green parties so long in coming in most African countries? "I think that if we had a movement such as Europe's 'Fridays for Future' in Africa, we would have deputies in parliament," Nabulega said. In Europe, Swedish teenager Greta Thunberg has managed to attract a great deal of attention especially among the young to the dangers of climate change.

Joao Massango sees another reason for the lack of success in the limited resources of the small environmental parties in Africa. He hopes for financial and logistical support from wealthier sister parties in Europe.

All the challenges notwithstanding, some green movements in Africa have small success stories to tell, according to Dorothy Nabulega. She points to three countries in particular: Rwanda, Madagascar and the Democratic Republic of Congo.

The Democratic Green Party of Rwanda (DGPR) won an impressive 4.55 percent of the vote in the 2018 elections, gaining two seats in parliament. In Madagascar, the Greens of the "Parti Vert Hasin'I Madagasikara" formed a coalition with the "Tous Ensemble Movement" of Andry Rajoelina in the run-up to last year's elections. Since the coalition's victory at the polls, the country's environment minister has been a member of the Parti Vert. In the Democratic Republic of Congo, too, the Green party's work has been successful. Even though it has no deputies in the National Assembly, it has Didace Pembe Bokiaga, a very prominent and active environmental activist, who held the post of environment minister for many years.

These are the exceptions that confirm the rule. Like Joao Massango's PEC-MT in Mozambique, Dorothy Nalubega's EPU is an outsider in her country's politics. "So far we haven't managed to win seats in parliament," she admits. Uganda's Greens are set to try again in the 2021 parliamentary elections: "We are not giving up hope that some of our people will one day be elected to parliament," Nalubega said.