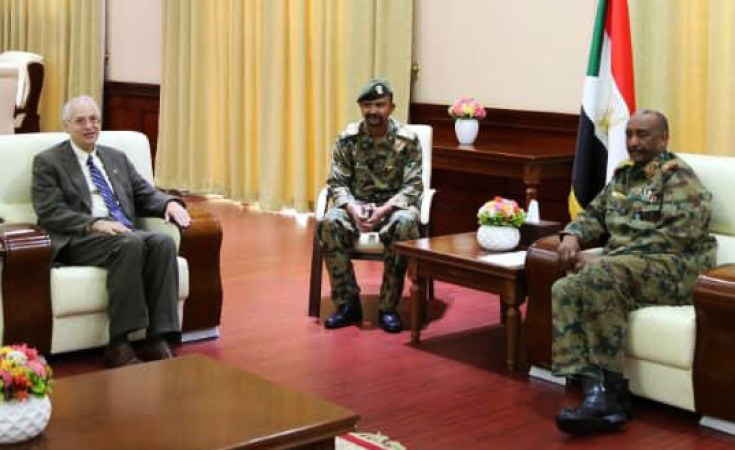 Khartoum — Yesterday, the US Special Envoy to Sudan Donald Booth held talks in Khartoum with TMC Chairman Abdelfattah El Burhan on the latest developments between the junta and the FFC regarding the efforts to reach a deal under which a civilian-led transitional government would be formed.

The official Sudan News Agency (SUNA) quoted the US envoy after meeting with El Burhan that the meeting was good and fruitful, and the envoy, according to SUNA, expressed optimism about the near realisation of the Sudanese dream of forming a government led by civilian and independent prime minister.

He added that the United States is interested and committed to helping the Sudanese, to reach agreement on arrangements for the transitional period, stressing that Washington wants to see Sudan has transcended the current stage.

He stressed that the United States will work with other Sudanese international partners to make sure that the Sudanese have made a breakthrough in this regard, so that they could get support from the international community.

Donald Booth was named as US Special Envoy for Sudan in June "to push for a political solution to the current crisis that reflects the will of the Sudanese people".

Special Envoy Booth is a retired Ambassador who previously served as Chief of Mission to Ethiopia, Zambia, and Liberia. Ambassador Booth served as the US Special Envoy for Sudan and South Sudan from August 2013 until January 2017.

European Union Foreign Affairs Council Monday reiterated calls for swift power transfer for a civilian-led authority saying it would not normalize relations with Sudan if they military council tighten grip on power.

The calls come in a statement issued after a briefing made by Pekka Haavisto Finland's Minister for Foreign Affairs to the EU Foreign Affairs Council on his recent visit to Khartoum and the region for talks on power handover to civilian authority after the collapse of al-Bashir's regime.

"A civilian-led transitional authority is the only partner with which EU-Sudan relations can be normalised," said the EU statement.

"When Sudan embarks on a transition to civilian rule, the EU looks forward to supporting the country in tackling the social, economic and political challenges and implementing the necessary reforms, and will provide assistance accordingly," the statement said.

Sudan Military and Opposition Sign Power-Sharing Deal
Tagged:
Copyright © 2019 Radio Dabanga. All rights reserved. Distributed by AllAfrica Global Media (allAfrica.com). To contact the copyright holder directly for corrections — or for permission to republish or make other authorized use of this material, click here.