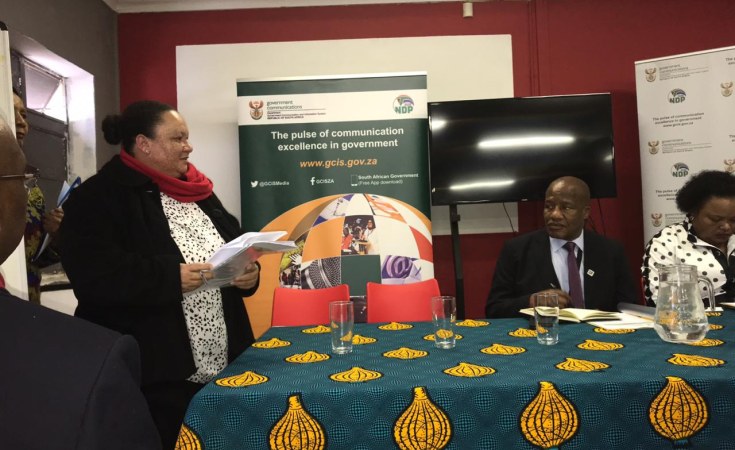 This morning during a scheduled engagement with the Community Media sector and the new Minister in the Presidency, Jackson Mthembu before his budget vote to Parliament, members of the sector handed a memorandum to the minister to highlight the current plight of community media.

The Minister felt that he was ambushed by the sector as he was under the impression that it was a simple "meet and greet".

Below is the memorandum as it was issued:

MEMORANDUM TO THE OFFICE OF THE PRESIDENCY, 17 July 2019

Since the dawn of democracy in South Africa, the country has made impressive gains in the promotion of media diversity through support for emerging, small commercial newspapers and community broadcasting services serving the majority of the people who were previously excluded.

In the early 90s media activists, many of whom are in this room today, fought for the establishment of the Media Development and Diversity Agency, tasked with the supporting community and independent media in South Africa. Since then the regulator has license over 200 community radio reaching an estimated audience of 8 million and 6 community TV stations reaching an estimated, collective audience of 14 million.

Community Newspapers by Independent publishers print in excess of 6 million copies per month with a readership that exceeds 20 million South Africans in all 11 official languages. Collectively the sector employs tens of thousands of previously disadvantaged individuals countrywide.

Unfortunately, in the last decade or so, these impressive gains have been rolled back as stations have struggled for survival in the face of weakened institutions (MDDA, GCIS and ICASA), state capture, government complacency and failed promises.

Year after year the sector attends "engagements" with the DoC, GCIS and the MDDA. Every year we regurgitate the same challenges and propose the same solutions. Every year the government and its agencies promise to address the issues and then nothing is done.

This year is different. The community media sector is on the verge of collapse with an estimated collective debt sitting at around R180 million. This is made up largely of debts to SAMRO & CARPASSO, SENTECH, SARS and rental. As we speak stations are being served eviction notices from their premises, retrenching staff and getting deeper into debt.

It makes no difference whether the MDDA and GCIS report to the DoC or to the Presidency, as long as something gets done.  The sector simply cannot be allowed to fail.

We call upon the Presidency to implement the following immediate measures:

• Provide emergency relief funding to pay off the collective debt to SARS, SENTECH, SAMRO & CARPASSO (paid to stations or directly to debtors – to avoid CSD challenges) – R150 million for radio, R15 million for TV and R15 million for print.

• Increase MDDA budget to allow for annual grant for all community broadcasters and increased support for print publishers.

• Build MDDA capacity at board and operational level to speed up grant approval and disbursement.

Tagged:
Copyright © 2019 Bush Radio. All rights reserved. Distributed by AllAfrica Global Media (allAfrica.com). To contact the copyright holder directly for corrections — or for permission to republish or make other authorized use of this material, click here.