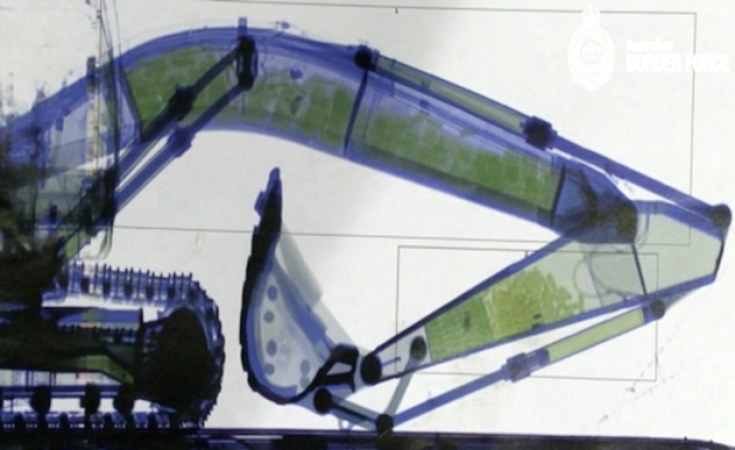 A joint operation commenced with partners from NSW Police, the AFP’s National Anti-Gangs Squad, Australian Border Force and other partners.

In June, Australian Border Force (ABF) officers intercepted a second-hand excavator which had recently arrived from South Africa. The excavator was X-rayed at the Sydney Container Examination Facility and anomalies were identified in the X-ray image.

Upon further inspection, approximately 384 kilograms of cocaine was found to be concealed within the excavator.

Subsequent investigations by the joint team identified a number of persons of interest in the ACT and southern NSW area.

Following a controlled delivery of the excavator this week, two Karabar NSW men aged 33 and 34 were arrested at a business premises in Bungendore NSW yesterday (Sunday, 14 July 2019).

Chief Police Officer for the ACT, Ray Johnson said this joint operation showed the ACT shouldn’t be seen as an easy target for criminal gangs to bring in drugs.

“It’s clear this group thought that bringing drugs into our district using this machinery would avoid the scrutiny of law enforcement. The seizure of the 384 kilograms of cocaine and the recent arrests shows how wrong they were.

“The partnership of all the agencies involved has led to this successful outcome. Crime groups should be on notice - all of our agencies are working together to disrupt your activities and bring you before the courts.

AFP Acting National Manager Organised Crime, Paul Osborne said that this is an excellent result for ACT and NSW Police and commonwealth partners.

“The illegal activities of organised criminal syndicates are a real threat to our communities, including here in the ACT. AFP Organised Crime is working closely with all our state partners including ACT Policing and NSW Police to combat the threat posed by these gangs,” said Acting Assistant Commissioner Osborne.

“This was an incredibly sophisticated concealment of cocaine, but through our joint efforts, we’ve been able to disrupt this syndicate and stop these harmful substances from infiltrating our borders,” Acting Deputy Commissioner Huey said.

“Our officers have highly sophisticated technology at their disposal and this detection really shows no matter the lengths criminals go to - even if they weld drugs into machinery - we have the skills and equipment to find these concealments.”

Police are urging anyone who may have any information about the activities of this group to contact Crime Stoppers on 1800 333 000, or via the Crime Stoppers ACT website. Please quote reference 6391209. Information can be provided anonymously.