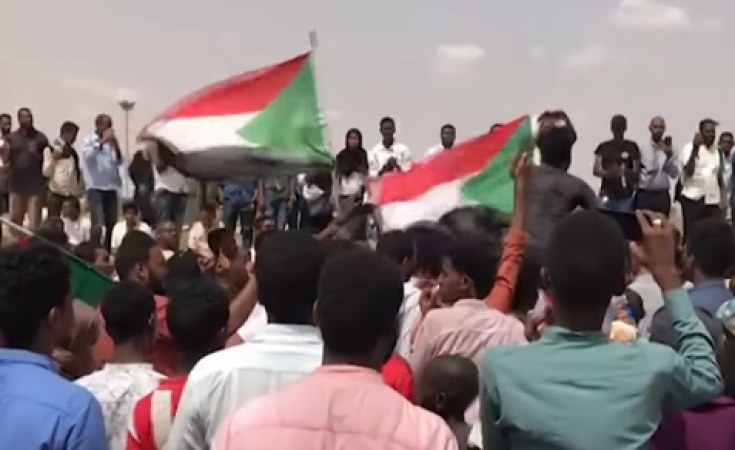 Daily Nation/YouTube
Hundreds of Sudanese demonstrators headed towards the Green Yard, a prominent square in Khartoum, during a rally to honour comrades killed in the months-long protest movement that has rocked the northeast African country.
allAfrica.com

Sudanese police fired tear gas as demonstrators marched in the capital Khartoum towards a prominent square to honour dozens of people killed in the months-long protest movement, Al Jazeera reports.

The rallies on Thursday came a day after protest leaders and army rulers signed a power-sharing deal to form a joint civilian-military body tasked with installing a civilian administration.

Reuters reports that the demonstrators rolled out a banner honouring fallen protesters, a symbolic move that left some in tears.

Reuters says thousands of demonstrators, mostly teenagers and people in their early 20s, joined a rally in the square, which continued to grow into the late afternoon. Protesters said they were renaming it from the Green Square to Freedom Square.

"The rallies are a tribute to those honourable 'martyrs' of the December revolution," the Sudanese Professionals Association said in a statement quoted by Al Jazeera.

Five Protesters Shot Dead in Sudan
Tagged:
Copyright © 2019 allAfrica.com. All rights reserved. Distributed by AllAfrica Global Media (allAfrica.com). To contact the copyright holder directly for corrections — or for permission to republish or make other authorized use of this material, click here.