He, however, tasked security agencies in Africa, particularly the intelligence community, to combat illicit financial flows, adding that development and stability of Africa have been undermined by the menance.

Buhari spoke in Abuja while delivering a keynote address at the opening session of the 16th Conference of the Committee of Intelligence and Security Services of Africa (CISSA).

The president established a link between the worsening security situation in Nigeria and illicit financial flows, which he said are detrimental to the development of Africa.

A statement by a presidential spokesman, Mr. Femi Adesina, quoted the president as describing the theme for the conference, "Illicit Financial Outflows from Africa and its impact on National Security and Development," as timely and appealed to stakeholders from the intelligence community of 52 African countries to create a template of risk factors and actionable strategies.

He also admonished participants to prioritise the examination of the links between crime and instability in Africa.

Buhari said criminals and their accomplices robbed the system through their nefarious activities and challenged the conference to put measures in place to deny terrorists and other criminals access to funds.

"As partners in the fight against crime and insecurity, you know that terrorist networks, organised criminal syndicates of drugs, arms and human traffickers and sundry hostile non-state actors are actively undermining the security and stability of our countries," he added.

Buhari called for firm and unwavering action aimed at addressing these threats, noting that "any evasion of rules and regulations in ways that aid corruption in its various manifestations, including illicit financial outflows, must be vigorously fought and defeated."

According to him, the responsibility conferred on him as an anti-corruption champion gave him the opportunity to know the level of devastation that corruption and illicit flow of funds do to Africa.

He expressed optimism that the conference would aid the needed urgency to address the menace, noting that war against corruption remains the main platform for attaining accelerated development.

He said: "My role as African Union's Anti-Corruption Champion brought me closer to appreciating more the devastating impact of corruption and illicit financial outflows on our continent.

In his address, Chairman of African Union (AU) Commission, Musa Faki Mahamat, said terrorism and radicalisation sponsored by illicit flows had continuously affected growth in Africa while ethnicity and religious diversities had been exploited for political gains.

Mahamat, represented by the AU Commissioner for Peace and Security, Ambassador Smail Chergui, said the Internet had been used as a valid platform for recruitment of people into criminal activities, noting that terrorists also use sophisticated technology like drones.

On his part, the Director General of the National Intelligence Agency (NIA), Ambassador Ahmed Rufai Abubakar, said conservative estimates showed that cumulatively, Africa had lost over $1 trillion in over five decades through illicit financial outflows. 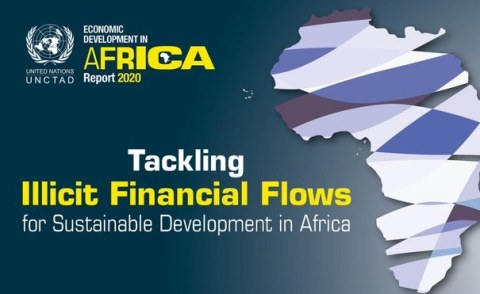 Nigeria Loses U.S.$400 Billion in Looted Funds to Foreign Havens
Tagged:
Copyright © 2019 This Day. All rights reserved. Distributed by AllAfrica Global Media (allAfrica.com). To contact the copyright holder directly for corrections — or for permission to republish or make other authorized use of this material, click here.

Museveni Sworn In, Vows to Ensure Welfare of Ugandans
Coronavirus