South Africa: Zuma and Trump - Half a World Apart, Yet Similarly Paranoid and Dangerous 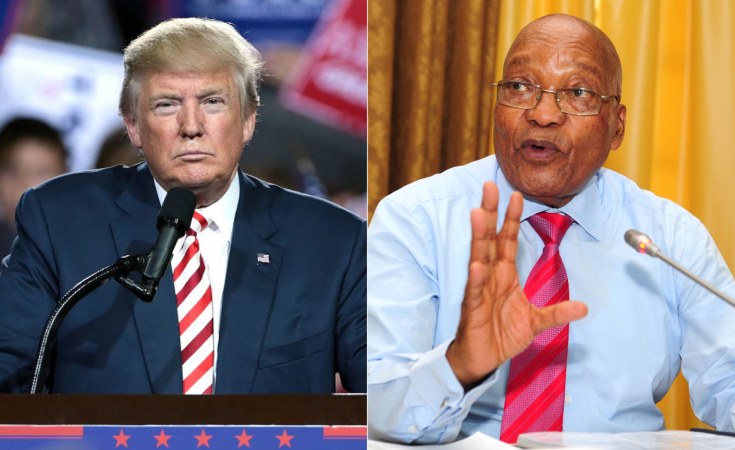 Within the space of a few days, we have been subjected to bizarre but carefully staged performances by US President Donald Trump and former South African President Jacob Zuma.

Trump has spewed racist hate-speech against four Democratic Party Congress women of colour, telling them to "go back home" to their "broken" and "crime infested" countries of origin. Zuma, appearing before the Zondo Commission probing allegations of grand corruption during his tenure, has played the victim of a 30-year conspiracy. He has sought to "out" former ministers of his cabinet as spies of the apartheid regime.

Both Trump and Zuma will disown any intent to foment violence, verbal or physical, against those they pillory. But, they know that their words constitute a dangerous incitement. They may be half a world apart in ideology, yet Trump and Zuma inhabit a similar world of conspiracy, lies, threats and paranoia.

Their world seeks - and to an alarming extent succeeds - in providing explanations of their misfortunes to the socially insecure and economically vulnerable.

The outsider and the conspiracist

By common consent, Trump's assault on the four Congress women is an early salvo of his campaign for reelection as president in 2020. He is making it plain that he will use much the same formula as in 2016.

He will run as the outsider against established elites, claiming to voice the concerns of the little man, but simultaneously positioning himself as an insider, a white male citizen, who promises to reclaim the US from the clutches of unwanted, unchristian and unpatriotic immigrants to restore the country to unsullied whiteness. Those against him he will denounce as unAmerican, as enemies of the people, and as the vanguards of foreignness and of hostile ideologies. Those against him will be criminalised.

Zuma's fate is what Trump fears - being removed from the presidency. Zuma's explanation for what has happened to him is to blame an opaque, near shadowy campaign against him. He alleges a plot by intelligence agencies of foreign powers and the former apartheid regime to remove him from any position of influence within a democratic South Africa.

To his mind, this explains his displacement as head of intelligence for the African National Congress (ANC), which now runs the country. It also explains his removal as deputy president by Thabo Mbeki in 2005 , on what he regards as specious allegations of corruption.

Despite the best attempts of these hostile forces, he eventually rose to be President - only to be eventually forced out by his enemies in February 2018 - before the end of his term - as a result of trumped up charges of corruption.

A world without morality

Both Trump and Zuma inhabit a world devoid of morality. It is a world which subordinates any sense of right and wrong to their political survival. Both identify what is right with their persons; both identify themselves not just with, but as the very embodiment, of their parties.

Trump has vanquished the old guard in the Republican Party, and has twisted its conservative, neo-liberal ideology into a neo-fascist populism which other Republican politicians repudiate at their peril. Republicans in Congress have reduced themselves to fawning acolytes, desperate to retain the favour of Trump's popular base.

In his pomp as President, Zuma acted likewise. The ANC in parliament and the country acting in craven subordination to his will, the liberation movement glued together by the material interest of his cronies and their patronage. Now out of power, he continues to identify himself as the "real" ANC, and those who ejected him from the presidency as counter-revolutionaries.

Both Trump and Zuma depict their opponents as enemies. Former US President Barack Obama was depicted as a "foreign Muslim" , foisted on the American people by unAmerican forces. Former South African ministers Ngoako Ramotlhodi and Simphiwe Nyanda, who have implicated Zuma in state capture, are denounced as apartheid spies.

The campaign of both comes at cost to the constitution, the rule of law and - let's not forget it - common decency.

Trump has embarked on his own campaign of "state capture", his most famous prize having been his appointment of two right-wing appointees to the Supreme Court. This, backed up by systematic appointment of conservatives to judges to lower courts, all to appease the white Christian right and to roll back civil rights for blacks, Latinos, the LGBT community and others for a generation to come.

Zuma's campaign of "state capture", structured around the interests of his friends, the Gupta family and other shady mafia-style bosses, is now being steadily undermined by the Zondo Commission and other investigatory commissions, yet came at massive cost to the economy, ordinary people and continues to fire destabilising political factional struggles within the ANC.

Trump and Zuma are both narcissistic and paranoid leaders, for whom the world of politics revolves around self.

Interestingly too, the politics of both is driven by the need to stay out of jail. Trump could face impeachment and prosecution for financial, tax and fraud offences once he is out of office. Zuma's need is more immediate, and his present bluster and his threat to unmask yet more spies within the ranks of the ANC is designed to dissuade further criminal charges being laid against him.

But, the most frightening thing is how, from prime ministers Narendra Modi in India, through to Recep Tayyip Erdoğan in Turkey, and Viktor Mihály Orbán in Hungary, the behaviour of both Trump and Zuma is becoming the new normal. And now Boris Johnson is waiting in the wings.

Zuma Threatens to Withdraw from Testifying at Corruption Inquiry

Arrest Warrant Issued for Former President Zuma in South Africa
Tagged:
Copyright © 2019 The Conversation Africa. All rights reserved. Distributed by AllAfrica Global Media (allAfrica.com). To contact the copyright holder directly for corrections — or for permission to republish or make other authorized use of this material, click here.