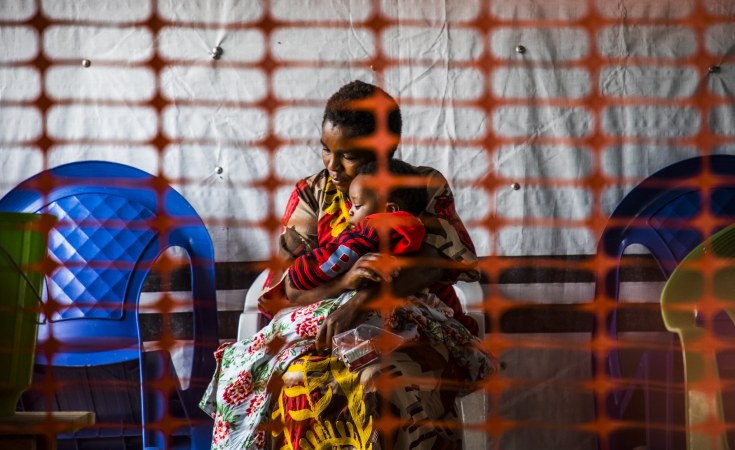 Vincent Tremeau/World Bank
A mother holds her child in the zone where people suspected of being infected by Ebola are held in quarantine at the Ebola Transition Center in Beni, North Kivu, January 18, 2019.
The Monitor (Kampala)
By Ambrose Musasizi

A suspected Ebola victim, who had been admitted to Kitovu Missionary Hospital in Masaka has died, the district health official has confirmed.

Shanitah Nambajjo, 8, a Primary One Pupil at Good Hope Primary School in Kyotera District was admitted to the hospital on Wednesday after developing symptoms similar to those of Ebola. Her death has caused panic among medics and residents in the area.

"It is true a patient who had been taken to Kitovu Hospital as an alert case of Ebola has died. Blood samples were taken from her and we are waiting for results from Uganda Virus Research Institute-UVRI in Entebbe," Dr Edward Muwanga, the Kyotera District Health Officer, said on Thursday.

He said the district health team has since visited the school, and home of the deceased to take necessary precautions.

"What we have found out is that, the deceased has been often sick and her right arm was paralyzed. She developed a fever at school and was diagnosed with Malaria in a clinic. Treatment was given to her, but no improvement was realised, she later lost consciousness before being transferred to Bikira Health Centre III," Dr Muwanga said.

He added that when the girl's situation worsened and she started bleeding from mouth and nose, she was referred to Kitovu Hospital from where she died on Thursday.

"We appeal to the public to be vigilant of anybody with symptoms related to those of Ebola. You ought to refer him/her to nearby health centre immediately," he adds.

Mr Emmanuel Ainebyona, the Health Ministry Spokesperson, told Daily Monitor the results are expected to be out by the end of Thursday.

On June 10, the World Health Organisation (WHO) declared that Ebola, which had earlier been reported in the neighbouring DRC, had crossed to Uganda. Three people have so far died in Kasese District.

WHO has donated more than $10 million (about Shs37 billion) in response to the outbreak of Ebola in Uganda.

The Minister of Health, Dr Ruth Aceng, has on several occasions stated that the country is ready to confront the epidemic.

Uganda Scrambles to Respond to Fresh Ebola Scare in Kasese

Millions of Dollars Released to Fight Ebola in DR Congo
Tagged:
Copyright © 2019 The Monitor. All rights reserved. Distributed by AllAfrica Global Media (allAfrica.com). To contact the copyright holder directly for corrections — or for permission to republish or make other authorized use of this material, click here.