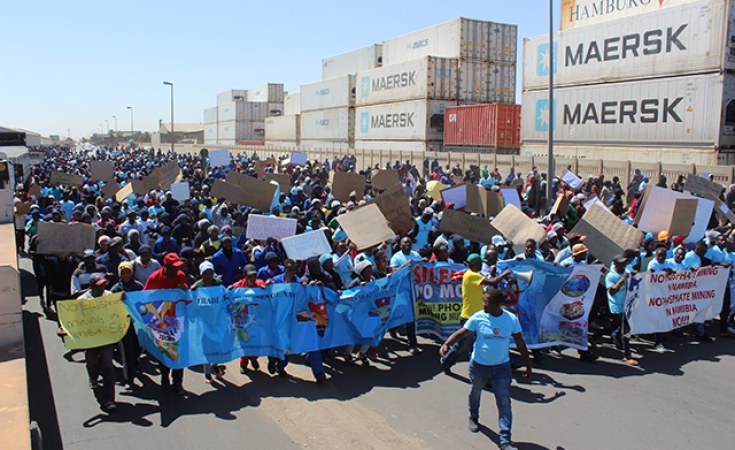 Adam Hartman/thenamibian.com.na
More than 1,000 people participated in the protest at Walvis Bay against marine phosphate mining. Most of those who participated were fishery workers.
The Namibian (Windhoek)
By Werner Menges

A company planning to start a controversial marine phosphate mining project off the Namibian coast is now suing the minister of environment and tourism and other officials in an attempt to be issued with an environmental clearance certificate that would allow it to start mining activities.

The company is asking the court to order the minister, the environmental commissioner or the deputy deputy commissioner to take a decision on the application for an environmental clearance certificate that NMP first made in April 2012, within 10 days after the court had ordered that the officials should make that decision.

The certificate would allow NMP to proceed with mining seabed phosphate in a part of the Atlantic Ocean, about 120 kilometres south-west of Walvis Bay.

The company's plan to start a marine phosphate mining project in Namibian waters has drawn fierce opposition from environmentalists and the Namibian fishing industry, who fear that mining activities could cause serious and long-term harm to the country's marine resources, and endanger fishing activities.

Former environmental commissioner Teofilus Nghitila - who is now the executive director in the Ministry of Environment and Tourism - granted NMP an environmental clearance certificate in September 2016.

A public outcry from environmentalists and role players in the fishing industry ensued, with community activist Michael Gaweseb also lodging an appeal with the minister against the granting of the certificate.

In November 2016, Shifeta upheld Gaweseb's appeal and set aside the certificate, but NMP then challenged that decision in the High Court, and in May last year, judge Shafimana Ueitele set aside Shifeta's decision on the appeal.

With the judge having stated that Shifeta could again hold a hearing to hear objections against the granting of the certificate, the minister again decided in June last year to set aside the certificate issued to NMP.

Shifeta also directed that a consultation process on NMP's application for a certificate should again take place, and that it should be concluded within six months after his decision to set aside the certificate.

In an affidavit now filed at the High Court, a consultant appointed by NMP, Michael Woodborne, says the company enquired from the ministry when a decision on its application for an environmental clearance certificate could be expected.

The answer that NMP received from the ministry was that since there was another case about the company's plan to launch a marine phosphate mining project in Namibian waters pending in the Windhoek High Court, the minister had decided not to make a decision on NMP's application until the pending case had been decided.

In the other case pending in the High Court, three organisations representing the Namibian fishing industry - the Confederation of Namibian Fishing Associations, the Namibian Hake Association and the Midwater Trawling Association of Namibia - and also the company Omualu Fishing, are asking the court to declare that a mining licence issued to NMP in July 2011 has expired or lapsed because the company failed to undertake an environmental impact assessment and apply for an environmental clearance certificate within the time limits stipulated in the law.

The fishing industry organisations' case is due to be heard on 10 September.

Fishing Sector Called On to Pledge 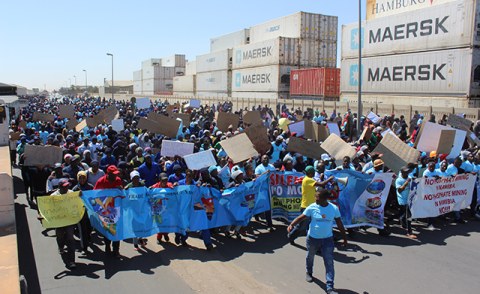