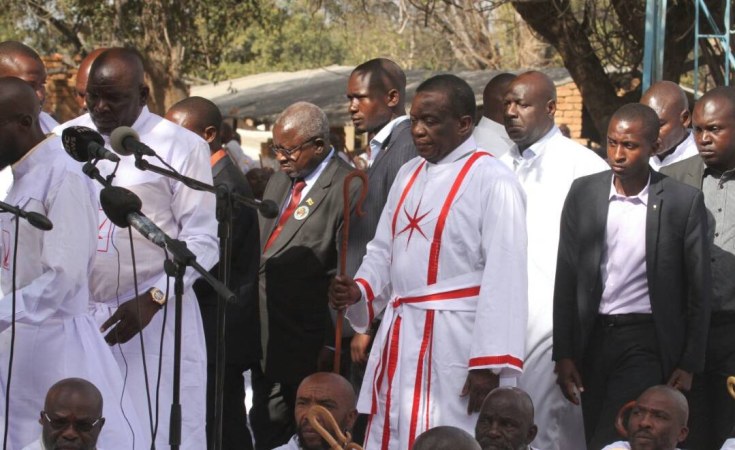 Marange — Church elders in the St Noah Taguta led Johannes Marange Apostolic sect have claimed that their leader was the force behind President Emmerson Mnangagwa's election victory in 2018 and have further advised the national leader to keep his relationship with the High Priest if he wanted to stay in power.

The elders made the claim during their Passover which was held at St Noah headquarters in Mafararikwa, Bocha in Marange recently.

It was Mnangagwa's second visit to the shrine after he visited the church leader during his 2018 election campaigns in July last year.

One of the elders told the gathering that President Mnangagwa was in power because of St Noah Taguta and therefore he should cement his relationship with him if he wanted to keep his job.

"We don't oppose the ruling party; we follow instructions from our leader," he said.

"He (Taguta) told us to go and vote for President Mnangagwa. We did so and he (Mnangagwa) won. Your (Mnangagwa) groups you work with had plotted a bhora musango (vote sabotage) but vapostori said our President is Mnangagwa. That's why you are there today," said the elder.

He said President Mnangagwa was chosen by Mutumwa Noah and he was supposed to stay calm as "things were under control".

"Even when our economy is struggling, we tell our people to be calm because the President was chosen by God," he added.

The preacher said their church was apolitical but its congregants voted because it was their constitutional right to do so.

Another speaker hailed Zanu PF government for embarking on the land reform programme, saying this move connected the ruling leader to St Noah and Holy Spirit.

"Don't be afraid. Your government did a wonderful job by distributing land to the people. Even in the bible, God wants people to work for themselves. If a person is well fed he will not revolt against his government.

"We thank you for coming to the shrine to meet Mutumwa Noah. The coming of Zanu PF into power was prophesied long back before some of the leaders in the party were born but it was revealed to Mutumwa by the Holy Spirit years back," said the elder.

He added that St Noah was a blessing to the country and government, saying the president should create a symbiotic relationship with him.

In response, President Mnangagwa pledged to work with the church, saying his party will assist in every way possible when the need arises.

"There is a relationship already between the party (Zanu PF) and your church," said the President adding that he shall maintain relations with the church.

"I was here in July last year and the crowd was not as this big and you promised me that you follow what your leader (St Noah) tells you to vote for me... you voted for me. Zvino uyo anokupa chigaro womudadira unenge uri benzi rakaita sei (You cannot turn your back on people who have voted you in power. You will be a fool),"said Mnangagwa.

He assured the gathering that he will fulfil the pledges he made to the Vapostori before the elections, adding that his government has already fulfilled other promises including drilling of boreholes for water supplies.