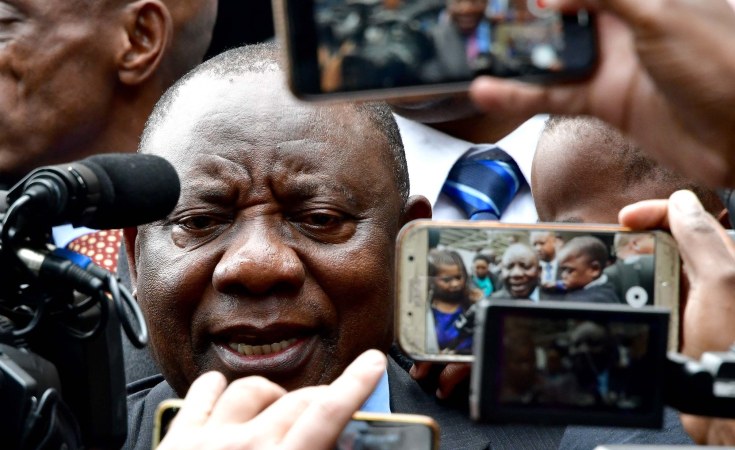 Mkhwebane found that Ramaphosa "deliberately misled" Parliament when he responded to a question about a R500 000 donation to his 2017 ANC presidential campaign in November last year, according to her report released on Friday.

She recommended that the National Prosecuting Authority investigate money laundering in relation to the path the donation followed to reach the CR17 campaign's bank account.

Speaking to the media in Parliament shortly after Mkhwebane's announcement, DA leader Mmusi Maimane said this ad hoc committee should have the power to subpoena, and that Ramaphosa should appear before it.

He said he was satisfied with the Public Protector's investigation. On the money laundering finding, Maimane asked: "Why did it have to go through multiple accounts?

"The NPA must do a thorough investigation on money laundering," Maimane said.

It was "imperative" that everyone realise that he had laid the complaint because no one should be above the law, he said, as Ramaphosa has said the day before in the National Assembly in defence of Public Enterprises Minister Pravin Gordhan.

Maimane said he would seek clarity on whether this would be investigated by the recently established investigative directorate in the office of the National Director of Public Prosecutions, which is meant to investigate cases stemming from state capture.

The ad hoc committee should determine the appropriate response to the Public Protector's findings against Ramaphosa, he said.

It was Maimane who laid the initial Bosasa complaint, after Ramaphosa's response to him in a question session in the National Assembly last year.

Ramaphosa told the National Assembly that his son had received money from Bosasa for services rendered in terms of a consultancy contract. He told Parliament then that he had seen this contract.

Ramaphosa later backtracked in a letter to then-speaker Baleka Mbete, saying the R500 000 payment from Bosasa was actually a donation to his ANC presidential campaign, which he had been unaware of.

It later emerged that his son, Andile Ramaphosa, did indeed do consultancy work for Bosasa. and his father refused to disclose how much he was paid for this work when Maimane asked in the National Assembly in March this year, saying the issue was with the Public Protector.

Shortly after the establishment of the 6th Parliament, the DA has asked the National Assembly to institute an inquiry into Mkhwebane's fitness to hold office, as it had done twice during the 5th Parliament.

Maimane was asked about the contradiction between their stated call that Mkhwebane should be removed from her post and their acceptance of her Bosasa report, and whether it was playing into the hands of the ANC faction fighting back against Ramaphosa's reforms.

"First and foremost, I have a slight challenge to the fact that I, as the leader of the opposition, must decide in which faction of the ANC people sit," Maimane said.

He said a president from the "so-called good faction" shouldn't be above the law, as it would create a bad precedent for future presidents. He said their reason for saying that Mkwhebane must be removed was based on her findings, which had been found unlawful by South African courts.

"We must uphold the office of the Public Protector," he said.

He said the DA would not join court proceedings in support of the Public Protector if Ramaphosa decided to ask the court to review the report.

"I'll abide by the court's decision. Let the Public Protector defend her own report. My complaint has been processed," Maimane said.

Public Protector, South Africans Wait to See Her Fate
Tagged:
Copyright © 2019 News24Wire. All rights reserved. Distributed by AllAfrica Global Media (allAfrica.com). To contact the copyright holder directly for corrections — or for permission to republish or make other authorized use of this material, click here.