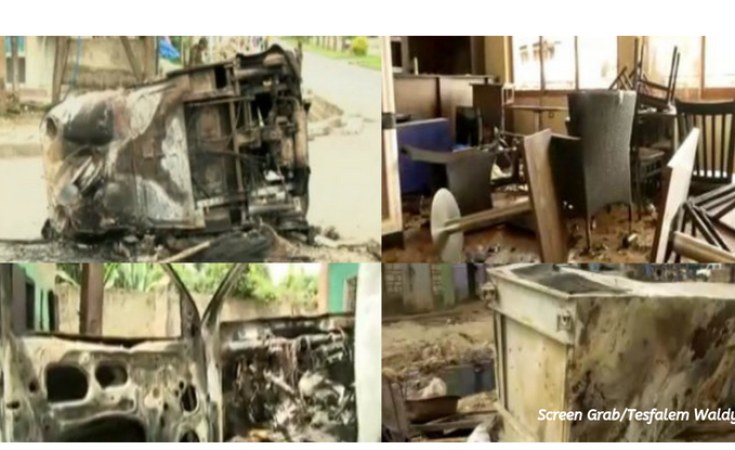 Upon coming to power on April 2, 2018, Ethiopian Prime Minister Abiy Ahmed promised liberty. But one year on, and as Ethiopia edges closer to its election scheduled for 2020, the country's democratic revolution is eating itself, and inadvertently chipping into the foundations of the existing security order in the volatile Horn of Africa region.

Far from transforming Ethiopia from a brutal autocracy run by a tiny elite to a true liberal democracy and entrenching the "Third Wave" of democracy in the Horn of Africa, Ethiopia's uncertain revolution risks delivering anarchy within its borders and across the region.

Perilously, Ethiopia is a huge dam, which if it bursts will drown the entire region. As a son of a Muslim Oromo father and an Amhara Orthodox Christian mother, and married to an Amhara wife, Abiy is the closest you come to Africa's Barack Obama.

But his vast liberal reforms have come against the fierce headwinds of ethnic nationalism. Implemented too fast without sufficient consensus within the context of Ethiopia's complex patchwork of competing ethnic groups in nine autonomous regions and a long history of militarism, the changes have fuelled uncertainty, insecurity and ethnic-based violence.

At home, Abiy survived a grenade attack at a rally he was addressing in Addis Ababa. In October, Abiy managed to contain a battalion of soldiers that marched to the PM's palace demanding a pay rise in a clearly anti-reform move.

And on June 22, 2019, President of Amhara region, Ambachew Mekonnen, was assassinated in what unfolded as an abortive "Amhara Coup". The same day, a bodyguard allied to the Amhara nationalist factions also assassinated General Se'are Mekonnen, the Chief of the General Staff of the Ethiopian National Defence Force, together with his aide, Major General Gizae Aberra.

The assassinations and the killing of the mastermind of the coup, Brigadier General Asaminew Tsige, signalled the end of Abiy's honeymoon. It has also increased the fragility of the Ethiopian state and society.

Regionally, Ethiopia's ethno-nationalism is rippling through the Horn of Africa. In the past 55 years, this security community has rested on two pillars: A strategic partnership between Kenya and Ethiopia and the Inter-Governmental Authority on Development (IGAD).

Ethiopia's status as landlocked power, desire to assert itself as the sole regional behemoth or hegemony and quest to gain multiple access to international waters in the Red Sea, the Gulf of Aden and the Indian Ocean are collectively propelling a distinct expansionist and militaristic hue in Addis Ababa's new Horn of Africa policy.

The landmark peace agreement with Eritrea is losing its glow. Abiy and Afewerki are increasing at odds on regional issues. In Sudan, Abiy has been working at the behest of the African Union to bring peace between rival parties. But Eritrean President Issais Afewerki has clearly thrown his support behind the ruling Transitional Military Council. "The Government of Eritrea requests the AU to refrain from internationalising and exacerbating the situation in Sudan," he said in statement.

Aligned to the Saudi Arabia-UAE faction in Gulf geopolitics, Asmara has strongly supported the war in Yemen and allowed its ports and airfields to be used for strikes in Yemen. Inversely, Asmara has accused Turkey and Qatar of "acts of subversion", including for supporting for Muslim League, which has links with the Muslim Brotherhood.

With its international isolation now over and the limited United Nations sanctions lifted, Eritrea does not direly need Abiy's Ethiopia. Worse still, the situation along the Ethiopia-Eritrea border remains tense as a result of ethno-nationalism within Ethiopia. Abiy's attempt to move Ethiopia's heavy artillery away from the border was blocked by local residents of Tigray, wary that there might be renewed conflict with Eritrea in the future. War veterans of the Tigray community saw the truce with Eritrea and handing over of the disputed town of Badme to Asmara as betrayal.

It has not helped matters that Isaias is fanning ethnic sentiments, recently describing the Trigrayan ruling party - the TPLF - as "vultures", and accusing them of following a "toxic and malignant" agenda.

Afewerki's alliance with Abiy, an Oromo, was calibrated to neutralise the Tigrayan and Amhara elite who Asmara blamed for the 1998-2000 war and its international isolation. This détente is likely to hold as long as the need to contain and neutralise the Tigrans exists.

But Afewerk seems to have dealt a blow to the Amhara. In its July 12, 2019 issue, suggestively titled: "Asmara and Amhara", the Africa Confidential posited that Afewerki may have had a hand in encouraging Amhara militancy in Ethiopia. Amhara militants who came back to Ethiopia under amnesty, used the chance to organise anti-regime military action from within Amhara State, precipitating the abortive "Amhara Coup".

Afewerki's and Abiy's approaches and agendas in war-torn Somalia might be at odds, too. But here, Afewerki has diligently woven a Triple Alliance with Abiy and Somali President Mohamed Farmajo based on the idea of a "New Horn" to supersede IGAD and ideologically anchored on the Oromo-Somali supra-ethnic Cushitic identity.

An increasingly assertive Kenya is the greatest obstacle to the New Horn. Putting Jubbaland in the hands of a pliable leader is critical to containing Nairobi, which has its AMISOM troops in Southern Somalia.

The Ethiopia-Kenya supremacy war is playing out in the run-up to elections in Jubbaland in August. Here, Addis Ababa is militarily and strategically supporting President Farmajo in his efforts to remove from power at all cost the incumbent President Ahmed Madobe, who Addis Ababa's securocrats and Farmajo men view as too close to Nairobi.

The unravelling of the Kenya-Ethiopia strategic partnership is eroding the broad regional consensus that underpins AMISOM. It is also weakening IGAD as an anchor to the regional security community in the Horn of Africa.

Previous Story
Country At a Crossroads As Region in South Pushes for New State
Next Story
Abiy's Walking a Tightrope, Let's Pray He Doesn't Fall Off

Abiy's Walking a Tightrope, Let's Pray He Doesn't Fall Off

Ethiopia's Sidama Vote Overwhelmingly for Independence
Tagged:
Copyright © 2019 The Nation. All rights reserved. Distributed by AllAfrica Global Media (allAfrica.com). To contact the copyright holder directly for corrections — or for permission to republish or make other authorized use of this material, click here.