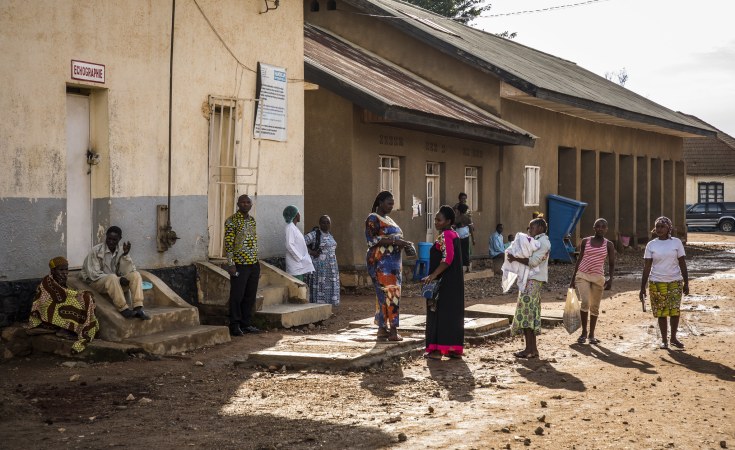 Vincent Tremeau/World Bank
People outside the Beni general hospital in the Democratic Republic of Congo.
The Conversation Africa (Johannesburg)
analysis By Julia Smith

Despite over a year of containment efforts, the World Health Organisation recently declared the Ebola outbreak in the Democratic Republic of the Congo a Public Health Emergency of International Concern. The declaration reflects the grim recognition that insecurity is preventing an effective response.

In efforts to contain the outbreak the link between politics and health are being highlighted. But there's a crucial aspect that's rarely mentioned - how gender inequities fuel and exacerbate outbreaks.

This suggests that lessons from past responses are being ignored.

The gender dimensions of outbreaks are both physical and socially constructed. Some diseases by their nature affect the sexes differently. For example, the Zika virus typically results in a relatively mild infection but is particularly risky during pregnancy, as it is linked to birth defects. Gender roles also affected how outbreaks are experienced. During almost all outbreaks, women provide the majority of care to the ill voluntarily in their homes at great risk and cost to themselves.

Global health policy has been slow to recognise the gender dimensions of outbreaks. During the West African Ebola outbreak, from 2014 to 2016, Sophie Harman, a professor from Queen Mary University of London, wrote that

gender and women are conspicuously invisible at every point in the international response to the outbreak.

A review of research on both the Ebola and Zika outbreaks found less than 1% of published research discussed gender issues.

I explore the issue further in my paper on integrating gender into preparations and responses to disease outbreaks. I conclude that the silence about women and gender inequality has two effects: existing inequalities are compounded with women suffering more because they are invariably at the forefront of the outbreaks, and that outbreak responses are less than optimal.

One of the consequences of not incorporating a gender lens into managing crises is that health inequities that women and girls already suffer, are exacerbated. The West African Ebola outbreak is a case in point.

Sierra Leone has one of the highest maternal mortality rates in the world. But this rose further during the epidemic as obstetric care facilities were closed in affected areas so resources could be diverted to emergency responses.

In addition, pregnant women suspected of being infected were denied care, in an effort to prevent further spread of the virus. Midwives did not have equipment to protect themselves from infection and there were no clinical guidelines for providing care to pregnant women infected with Ebola.

Another major factor is that women provide the bulk of care to the ill. This care work increases their risk of infection and places enormous financial, social and psychological burdens on them.

Research from Liberia documents how women care providers continue to suffer from the psychological trauma of being solely responsible for those infected with Ebola and from the fear of contracting and passing on the virus, particularly to their children.

Failure to recognise the gender dynamics of outbreaks also limits the effectiveness of response efforts. An evaluation of Medicine Sans Frontier's Ebola response in Guinea noted that awareness and education programmes had limited impact because they lacked an understanding of local gender norms. Materials advising against touching and cleaning up after those who appeared infected were irrelevant to women who were responsible for caring for the ill.

Don't touch messages do not recognise that women have to touch to give care.

In addition, communications didn't answer questions like: "How do I manage a family of children, including infants and toddlers, in quarantine?"

It is, of course, challenging for policy-makers and global health leaders to address the milieu of issues that emerge with an outbreak. The crisis context results in a "tyranny of the urgent". In this situation technical solutions are prioritised. Structural issues, such as addressing gender inequities, are put aside until later.

But the two recent Ebola outbreaks demonstrate that the distinction between technical and structural challenges is false; that social and political issues need to be addressed alongside medical responses if those most vulnerable are to be protected and an outbreak is to be contained.

So how is such a response mobilised? Organisations like the Social Enterprise Network for Development, a non-government organisation based in West Africa, and active in Sierra Leone during the Ebola outbreak offers some useful grassroots examples that global policy-makers can learn from.

The organisation took a number of innovative but simple steps. These included:

Similar initiatives at a national and global level could include funding home-based care programmes during outbreaks, investing in health system strengthening, and including women from affected communities in decision-making.

Millions of Dollars Released to Fight Ebola in DR Congo
Tagged:
Copyright © 2019 The Conversation Africa. All rights reserved. Distributed by AllAfrica Global Media (allAfrica.com). To contact the copyright holder directly for corrections — or for permission to republish or make other authorized use of this material, click here.