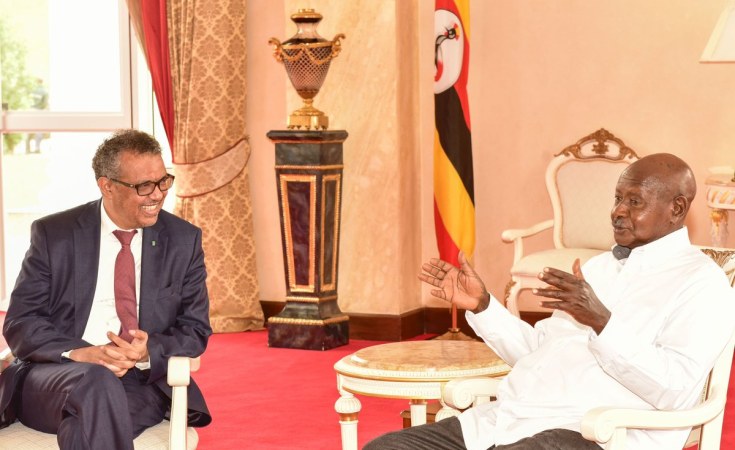 There was a scuffle in Kikuube District on Sunday when relatives of a suspected Ebola victim attempted to take his body from a health centre.

Health officials say a one Jawiya , 34, a resident of Senjojo Landing Site in Buhuka parish in Kyangwali Sub County, died on Saturday night as his relatives took him to Buhuka Health Centre.

Eyewitnesses say his relatives demanded to take the body for burial but health officials declined to hand over the body since they did not have protective gear and competencies to bury Ebola victims.

However, relatives stormed the health centre, picked the body and transported it to Nsonga Landing Site before they were intercepted.

"The security team intercepted the relatives at Nsonga when they had already put the body in a boat about to set off for Senjojo Landing Site," Mr Original Okumu Ngamita, the Buhuka Parish chairperson, said.

He said the bereaved family tried to resist but the security operatives removed the boat engine and blocked it from setting off.

"We told them to be cooperative and accept medical officials to bury their relative using protective gear since he had symptoms similar to those of Ebola," a health official, who preferred anonymity, said.

The deceased is reported to have visited DR Congo two weeks ago and upon returning to Uganda, he developed headache, a running stomach and persistent fever.

He was treated for malaria at a private clinic but his health deteriorated.

"On Saturday, he started oozing blood from his mouth and nose. His relatives decided to take him to Buhuka Health Centre. Unfortunately, he died on the way. His body was brought at 9pm," Dr Nicholas Kwikiriza, the district health officer, said.

The health office has since obtained samples from the deceased which they sent to the Uganda Virus Research Centre in Entebbe for investigation.

On June 10, the World Health Organisation (WHO) declared that Ebola, which had earlier been reported in DR Congo, had crossed to Uganda. Three people have so far died in Kasese District and a suspected case in Masaka. WHO has donated more than $10m (about Shs37b) in response to the outbreak of Ebola in Uganda. The Minister of Health, Dr Ruth Aceng, has on several occasions said the country is ready to confront the epidemic.

Uganda Starts Largest Ebola Vaccine Trial for Caregivers
Tagged:
Copyright © 2019 The Monitor. All rights reserved. Distributed by AllAfrica Global Media (allAfrica.com). To contact the copyright holder directly for corrections — or for permission to republish or make other authorized use of this material, click here.