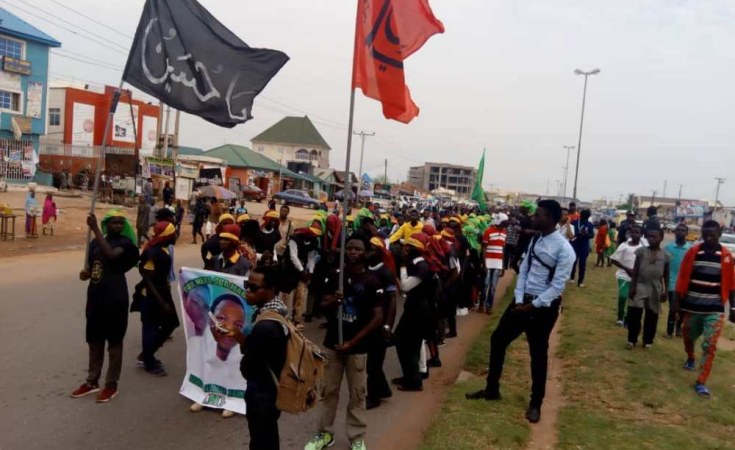 The Coalition of Ohanaeze Youth Groups has given the Federal Government 7-day ultimatum to proscribe the activities of the Islamic Movement in Nigeria, IMN, nationwide.

The coalition gave the order following the constant violent protest by the sect, which has claimed many lives and government properties.

The group was reacting to the Monday's attack by the Shiite militants on emergency point of the National Emergency Management Agency, NEMA.

Several persons were injured while many vehicles belonging to the agency were set ablaze in the bloody attack.

Addressing a press conference of Monday, the Coalition of Ohanaeze Youth Groups an amalgamation of Igbo Youth Groups in Nigeria, affirmed that the Islamic group must be outlawed within seven days.

Comrade Ogbonna Ogbonna, Publicity Secretary, who spoke on behalf of the group, noted that federal government must act now in the interest of Nigerians before it gets too late.

It is instructive to note that the IMN as an organization has displayed violent tendencies in Nigeria as far back as the early '80s which culminated in the incarceration of its spiritual leader Sheik Ibrahim El-Zarzaky by successive governments for crimes against the state, disregard for constituted authorities and the disruption of public peace.

The IMN carried on with this trend unabated with the active support from the government of Iran and some other extremist organizations that have continually funded their operations in Nigeria since the early '80s.

The Coalition of Ohanaeze Youth Groups having viewed the current situation in Nigeria with regards to the resurgence of the violent activities of the IMN that has led to the death of innocent Nigerians as well as security operatives calls for concern and urgent action from the federal government in the interest of peace and tranquillity.

The IMN cannot continue to insult the sensibilities of Nigerians by arrogating the propensity for violence to itself alone, forgetting that the heterogeneous nature of Nigeria and experiences of the past makes each ethic group mutually suspicious and ready to take laws into their hands if the situation arises.

The Coalition of Ohanaeze Youth Groups consequently wishes to state that our silence should not be taken for humility, and our respect for the constitution of the Federal Republic of Nigeria should equally not be misconstrued as foolishness.

The activities of the IMN has indeed caused countless tears and sorrow to a large population of Nigeria that are law-abiding and steadfast in the belief that Nigeria shall make progress and reclaim its spot in the comity of nations in the world.

The IMN cannot continue to constitute themselves as an executive terror group terrorizing Nigerians and the federal government, and by extension, the Nigerian Police Force would not act proactively towards containing their nefarious activities in the interest of peace and tranquillity in Nigeria.

This is on the heels that during the period the leader of the Indigenous People of Biafra (IPOB) Nnamdi Kanu was incarcerated, the Igbo Youths did not take laws into their hands by not constituting themselves to nuisance to public peace in the country.

The actions of the Ohanaeze Youths should not be taken for granted by the relevant authorities in Nigeria in the light of the prevailing circumstances that has clearly shown that the IMN group has an agenda to destabilize Nigeria with the active support of the government of the Islamic Republic of Iran and other terrorist networks around the world.

The Coalition of Ohanaeze Youth Groups states in unequivocal terms that the lackadaisical attitude of the federal government in dealing decisively with the IMN terrorist group sends a dangerous signal and if care is not taken might eventually lead to the disintegration of Nigeria.

The IMN has consistently violated all known international laws as regards the protection of human rights and the right to freedom of association of Nigerians regardless of their ethnic and religious affiliations.

The more curious is the fact that the Nigerian government has refused to sever ties with countries that have supported and funded the nefarious activities of IMN. This is suspect and highly unacceptable to the Coalition of Ohaneze Youth Groups.

The Coalition ofOhanaeze Youth Groups at this moment states that it would no longer seat and watch as the IMN continues to constitute a threat to the sovereignty of the Federal Republic of Nigeria under whatever guise.

It, therefore, advises the leadership of the IMN to seek legal methods in advancing the case of their leader in line with existing laws in Nigeria, instead of taking the laws into their hands by embarking of violent street protests and other activities that do not augur well for Nigeria and Nigerians.

The Coalition of Ohaneze Youth Groups consequently gives the Federal Government and the Nigerian Police Force a 7-day ultimatum to proscribe the IMN as a terrorist group in line with the avalanche of evidence before the general public.

It wishes to state in unequivocal terms that failure to proscribe the IMN as a terrorist group would leave the Coalition of Ohanaeze Youth Groups with no option than to take laws into our hands.

The exigencies of time require that the Federal Government should act proactively if it is desirous of keeping the country united and safe for all concerned. The federal government must act now in the interest of Nigerians before it gets too late.

A word is enough for the wise because the Coalition of Ohaneze Groups would not continue to watch in silence as innocent Nigerians fall victim to the nefarious activities of the IMN and their sponsors.

The 7-day ultimatum given to the Federal Government to proscribe the IMN as a terrorist group stands sacrosanct and must be treated with all seriousness that it truly deserves.

Nigerian Court Outlaws Shiite Movement as Terrorists
Tagged:
Copyright © 2019 Vanguard. All rights reserved. Distributed by AllAfrica Global Media (allAfrica.com). To contact the copyright holder directly for corrections — or for permission to republish or make other authorized use of this material, click here.