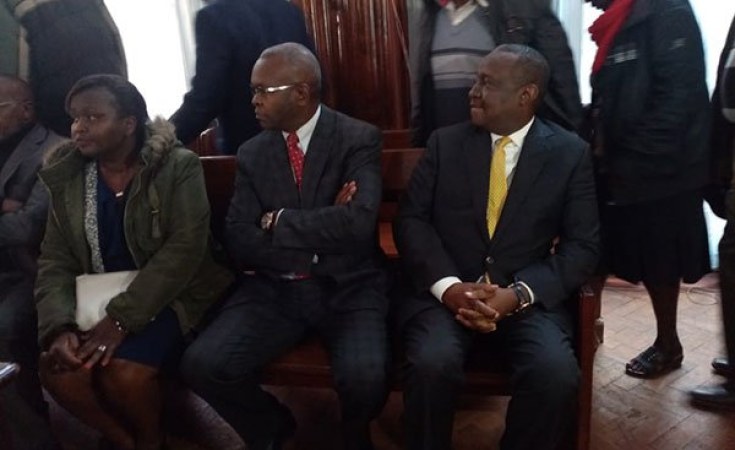 The arrest of two top officials at the National Treasury has left the most powerful government ministry in a crisis, as the corruption purge claims its highest casualties in the Jubilee administration yet.

President Kenyatta said in his last State of the Nation address that he would ask any government officials charged with corruption to step aside.

If he lives by that commitment, it is expected that Treasury Cabinet Secretary Henry Rotich and his Principal Secretary Kamau Thugge will be forced out of their lucrative offices to defend themselves from outside the government. This is set to leave the Treasury in an unprecedented crisis.

Among the events cancelled following the arrest of the two is a visit by French finance minister Bruno Le Maire, whose advance party was already in Nairobi to plan for the tour, which was to include signing bilateral agreements with Treasury officials.

Mr Le Maire was to arrive on Monday but his trip was cancelled after the Treasury honchos were picked up by Directorate of Criminal Investigations (DCI) officers.

By Monday evening, it was not clear who would be put in charge of their dockets. But Cabinet sources told the Nation that the decision rests with President Kenyatta and he was yet to communicate his next course of action.

The Nation has also established that the President was informed several weeks ago about the recommendations to charge the two, among 28 others, and he must have been considering the options before giving the investigative agencies the nod to proceed with yesterday's action.

Besides controlling expenditure, the Treasury coordinates the raising of debt and the implementation of the national budget.

As the President has done before, he is likely to appoint one of the current Cabinet secretaries in an acting capacity, before filling the position through another Cabinet reshuffle. This will present the easiest route to ensuring continuity, given that a totally new person will need to go through vetting in Parliament.

The principal secretary position has always been given to an insider, and it is not clear who will inherit it. The person in this role is the ministry's main accounting officer.

Director of Public Prosecutions (DPP) Noordin Haji yesterday threw the Treasury into an unprecedented quandary when he said investigations by the DCI had determined that Mr Rotich and Dr Thugge, alongside two dozen other State officials, did not follow proper procedures, aiding the loss of taxpayer money allocated for dam projects in Elgeyo-Marakwet.

Mr Rotich presented himself at the DCI Monday afternoon.

When the two leave, the top official to remain at the Treasury is Chief Administrative Secretary Nelson Gaichuhie.

Before this, Mr Gaichuhie served as MP for Subukia from 2007 to 2017. In Parliament, he was the vice-chairman of the Finance Planning and Trade Committee, and a member of the Budget and Appropriations Committee and Appointments Committee.

A career central banker, Dr Sirma joined the Central Bank 1986 as a graduate trainee and rose through the ranks to the position of deputy governor and vice-chairman of the monetary policy committee.