Congo-Kinshasa: World Bank Mobilizes US$300 Million to Finance the Ebola Response in Democratic Republic of Congo 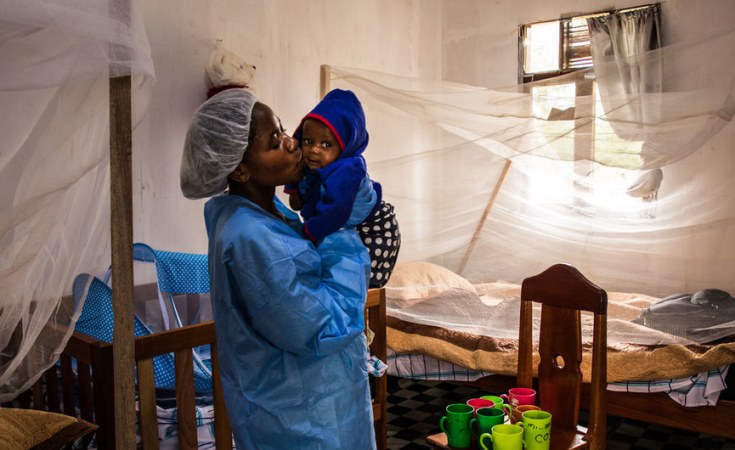 UNICEF/Vincent Tremeau
A caregiver with the seven-month-old baby of a woman who died of Ebola in North Kivu,
World Bank (Washington, DC)
press release

The World Bank Group today announced that it is mobilizing up to US$300 million to scale up support for the global response to the Ebola epidemic in the Democratic Republic of Congo (DRC). The announcement follows the declaration by the World Health Organization (WHO) that the current outbreak constitutes a Public Health Emergency of International Concern.

Together, we must take urgent action to stop the deadly Ebola epidemic that is destroying lives and livelihoods in the Democratic Republic of Congo”, said World Bank Chief Executive Officer Kristalina Georgieva. “The communities and health workers on the front line of this outbreak urgently need more support and resources from the international community to prevent this crisis from worsening inside the country and from spreading across borders.”

The US$300 million in grants and credits will be largely financed through the World Bank’s International Development Association (IDA) and its Crisis Response Window, which is designed to help countries respond to severe crises and return to their long-term development paths. The financing package will cover the Ebola-affected health zones in DRC and enable the government, WHO, UNICEF, WFP, IOM and other responders to step up the frontline health response, deliver cash-for-work programs to support the local economy, strengthen resilience in the affected communities, and contain the spread of this deadly virus.

This amount is approximately half of the anticipated financing needs of the Fourth Strategic Response Plan (SRP4), which is expected to be finalized in the coming week by the Government and the international consortium of partners working on the response. The World Bank has been supporting programs to combat DRC’s ongoing battle with Ebola since May 2018, with resources going to the frontline response, health system strengthening, and preparedness to reduce the risk of spread.

The US $300 million in World Bank financing announced today comes in addition to the US$100 million disbursed by the World Bank and the Pandemic Emergency Financing Facility (PEF) in response to the current Ebola Outbreak in DRC since August 2018. Details on the Bank’s total financing for the DRC Ebola response to date are available here.

Ebola has spread across communities already beset by the severe hardships of extreme poverty and insecurity. The World Bank’s engagement in DRC is focused on investing in people, supporting communities, strengthening services and systems, which are all critical steps to stamping out this crisis---and to tackle the underlying sources of poverty and inequity that have helped fuel this deadly outbreak.

U.S. To Give Extra $38 Million To Help Contain Ebola Outbreak

Third Ebola Case Confirmed in DR Congo City of Goma
Tagged:
Copyright © 2019 World Bank. All rights reserved. Distributed by AllAfrica Global Media (allAfrica.com). To contact the copyright holder directly for corrections — or for permission to republish or make other authorized use of this material, click here.