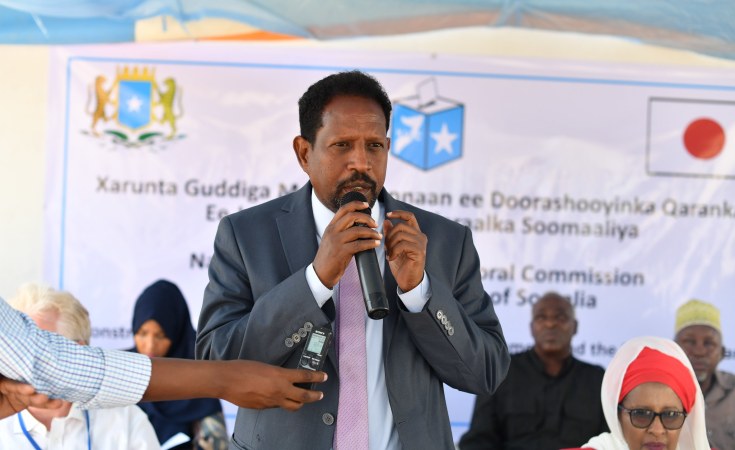 Omar Abdisalan/UN Photo
Abdirahman Omar Osman, the Mayor of Mogadishu and Governor of Benadir Regional Administration, speaks at the inauguration of a perimeter wall for the future office of Somalia's National Independent Electoral Commission in Mogadishu on 26 March 2018.
UN News Service

UN Secretary-General António Guterres has condemned Wednesday's deadly terror attacks in Somalia, that targeted the offices of the mayor of Mogadishu, reportedly killing six Government officials and injured several others.

Mr. Guterres extended his "deep condolences" to the victims' families and loved ones, and reiterated the full support and solidarity of the UN with the people and Government of Somalia.

According to media reports, the attack was carried out by a female suicide bomber, and was claimed by terror group al-Shabab.

The mayor of Mogadishu, Abdirahman Omar Osman, was one of those injured in Wednesday's attack. He is reported to be unconscious, and is due to be flown to Turkey for treatment.

The new UN special envoy to Somalia, James Swan, had met the mayor at the offices earlier in the day, to discuss progress and challenges in the capital and surrounding areas.

Mr. Swan, who also heads the UN Assistance Mission in Somalia, UNSOM, described the bombing as a "heinous attack", that "demonstrates a violent disregard for the sanctity of human life", in a statement released by the Mission on Wednesday.

The following day, UN independent expert Bahame Tom Nyanduga, commended Somalians for their resilience in the face of extreme challenges such as conflict, terrorist bomb attacks, and grave violations of human rights, whilst dealing with poverty and a lack of basic necessities.

Mr. Nyanduga's comments came in a statement released following a visit to Somalia, in which he called on the international community to continue help Somalia to strengthen its institution, and the justice and security sector, ahead of the next elections.

Earlier this month, al-Shabab reportedly claimed responsibility for an attack on the southern city of Kismayo, during which a car containing explosives was driven into a hotel, which was then stormed by gunmen. At least 26 people were killed.

Somali President Gives Up U.S. Citizenship
Tagged:
Copyright © 2019 UN News Service. All rights reserved. Distributed by AllAfrica Global Media (allAfrica.com). To contact the copyright holder directly for corrections — or for permission to republish or make other authorized use of this material, click here.