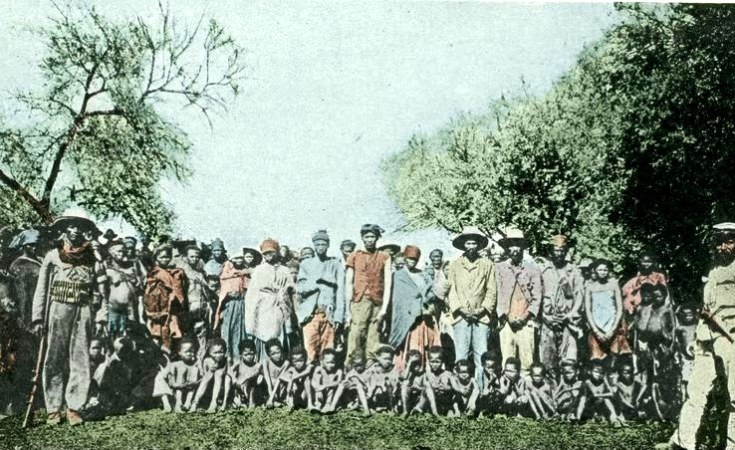 Equal rights for Africans in Germany and the colonies - that's what 18 Africans demanded 100 years ago. A plaque in Berlin commemorates the long-forgotten Dibobe Petition.

What Martin Dibobe and a group of fellow Africans demanded in the summer of 1919 truly packed a punch.

Pledging "undying loyalty" to the young Weimar Republic, they also submitted petitions to the National Assembly and the colonial ministry, demanding what amounted to a small revolution - equal rights for Germans and Africans in Germany. They demanded an African delegate to the Reichstag (in that case, Dibobe himself) and more rights for the inhabitants of the German colonies in Africa, they demanded the end of corporal punishment and forced labor. "Their conditions indirectly pointed out all the mistakes of colonialism," historian Paulette Reed-Anderson told DW.

Dibobe experienced the injustices of the colonial system firsthand. He was born the son of a deputy headman in 1876 in Cameroon, which was a German colony from 1884 to 1919. He came to Berlin as a young man as part of an ethnological display designed to satisfy German curiosity about "everyday life in Africa" and boost people's enthusiasm for colonialism. Dibobe worked his way up to become the first black train driver in the city's elevated train system. He married his landlord's daughter and was all the while a tireless advocate for the rights of Africans, a clever diplomat who understood the circumstances he lived in. "It didn't make sense to simply write 'We want independence' because they knew they wouldn't get it," said Reed-Anderson, an expert in the history of the African community in Germany. "They were very pragmatic."

The answer was silence

But Dibobe's demands came to nothing. Neither the National Assembly, which was working on a new democratic constitution in Weimar, nor the colonial ministry responded. After the 1919 Treaty of Versailles, Germany ceded its colonies to the WWI victorious powers France and Britain. The Dibobe petition's 32 demands remained unfulfilled.

Now, 100 years later, the 18 signatories' petition has received public recognition with a commemorative plaque affixed to the building of the former colonial office in central Berlin. "100 years ago, migrants from German colonies living here in Germany presented comprehensive demands: The 18 signatories demanded independence, equal rights and legal security in the colonies, said Berlin's Culture Senator, Klaus Lederer, at the unveiling ceremony. "They continued to demand participation and representation in words that sounded like reforms, but implicitly questioned the system of colonial rule that was based on fundamental inequality and violence."

Vexed by the racism in Germany, Martin Dibobe returned to Africa. Cameroon, now under French rule, denied him entry, and his trail was lost in 1922 in Liberia. Dibobe was forgotten. The petition named after him is still important today, however, believes German-Tanzanian activist Mnyaka Sururu Mboro, co-founder of the Berlin Postkolonial group that initiated the commemorative plaque.

"They demanded an African member of parliament," Mboro said, adding that Senegal-born lawmaker Karamba Diaby joined the German Bundestag almost 100 years later. Mboro, who has lived in Germany for 30 years, says other demands have still to be met: "Many Afro-Germans are still not regarded as fully-fledged Germans - even if they live here and speak the language, they are still not accepted."

Germany still has difficulty coming to terms with its colonial history. Activists have unsuccessfully campaigned for a monument to German colonialism to be erected in Berlin and the topic is barely present in school textbooks and the media. Streets still bear the names of German colonial rulers, which has angered many Germans. Fulfilling the demands Dibobe and his fellow activists penned 100 years ago would be a recognition of Germany's past, according to Paulette Reed-Anderson . It is an important part of German history, she argues - one that still begs research and debate in terms of how it influences present society.

Geingob Says Germany Ready to Apologize for Genocide - But When?
Tagged:
Copyright © 2019 Deutsche Welle. All rights reserved. Distributed by AllAfrica Global Media (allAfrica.com). To contact the copyright holder directly for corrections — or for permission to republish or make other authorized use of this material, click here.