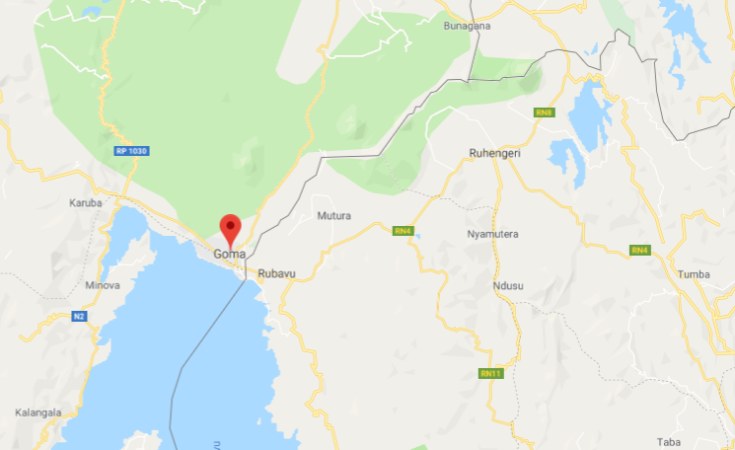 Google Maps
A map showing the location of the Democratic Republic of Congo city of Goma, with Rwanda on the right. The border between the two countries extends into Lake Kivu, bottom left.
Deutsche Welle (Bonn)

Health officials fear an Ebola outbreak in the eastern DR Congo could spread in Goma. Earlier in July, the city of two million people registered its first case of the deadly virus.

A second case of Ebola has been confirmed in Goma, a city of two million people in eastern DR Congo near the border with Rwanda, officials said Tuesday.

More than 1,700 people have died since an outbreak in the eastern Congo was declared almost a year ago, prompting the World Health Organization in July to declare a global emergency.

Authorities fear that the outbreak may spread from largely rural areas to Goma, a major transportation hub which registered its first Ebola infection in mid-July.

Jean-Jacques Muyembe, a local Ebola response coordinator, told reporters that there was no apparent connection to the new case and the previous one.

The man from a mining area in northeastern Congo's Ituri province arrived in Goma on July 13 and began to show symptoms on July 22. He is now quarantined in a treatment center.

In the first case in Goma earlier this month, a pastor tested positive and later died after arriving in Goma by bus from a rural area hardest hit by the outbreak.

Congolese officials say they have increased surveillance at points of entry and sanitary control in and around Goma.

Containing the outbreak has been hampered by distrustful communities and a plethora of armed groups regularly threatening and attacking health workers and treatment centers.

The Ebola virus is highly contagious and has an average fatality rate of about  50 percent, although an experimental but effective Ebola vaccine has been rolled out.

The WHO has said there is a "very high" chance the outbreak spreads across region.

Fears Growing That Congo's Ebola Could Spread to Neighbouring Countries

A Year On, More Help Needed to Fight Ebola in DR Congo
Tagged:
Copyright © 2019 Deutsche Welle. All rights reserved. Distributed by AllAfrica Global Media (allAfrica.com). To contact the copyright holder directly for corrections — or for permission to republish or make other authorized use of this material, click here.