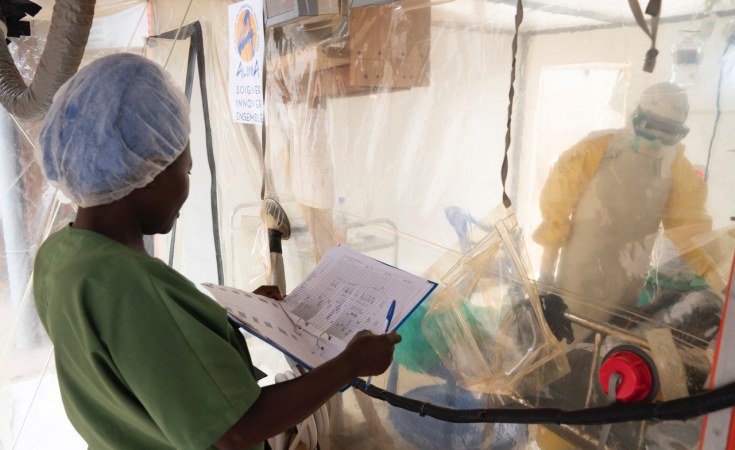 Chris Black/WHO
Health workers talk to an Ebola patient, while a nurse consults a chart outside at an Ebola treatment centre in Beni, Democratic Republic of the Congo.
Voice of America (Washington, DC)
By VOA News

Officials in the Democratic Republic of Congo have confirmed a second case of the deadly Ebola virus in the city of Goma.

Goma is home to more than a million people and lies directly on Congo's border with Rwanda, where tens of thousands cross on foot daily.

"I have just been informed of a case of Ebola in Goma," Dr. Aruna Abedi, coordinator of the Ebola response in North Kivu province, told AFP.

The case involves a man who traveled to Goma from a northeastern rural community in Ituri province. He was diagnosed a few days after arrival and is being treated at the Goma Ebola Treatment Center.

Earlier this month, a pastor tested positive and later died after arriving in Goma by bus, sparking fears the disease could spread quickly through the densely populated city.

After that incident, the World Health Organization declared the Ebola epidemic in DRC's conflict-ridden North Kivu and Ituri provinces a Public Health Emergency of International Concern.

The United Nations' Children's Fund, or UNICEF, reports an unprecedented number of children have been infected in this outbreak. Children account for more than 700 of the 2,671 reported cases of Ebola. UNICEF health specialist Jerome Pfaffman said more than half of the youngsters infected are below the age of five.

This is the 10th outbreak of the disease over the last four decades in the DRC. It is the second-largest outbreak after the 2014 historic epidemic in West Africa that killed more than 11,300 people.

Fears Growing That Congo's Ebola Could Spread to Neighbouring Countries

A Year On, More Help Needed to Fight Ebola in DR Congo
Tagged:
Copyright © 2019 Voice of America. All rights reserved. Distributed by AllAfrica Global Media (allAfrica.com). To contact the copyright holder directly for corrections — or for permission to republish or make other authorized use of this material, click here.