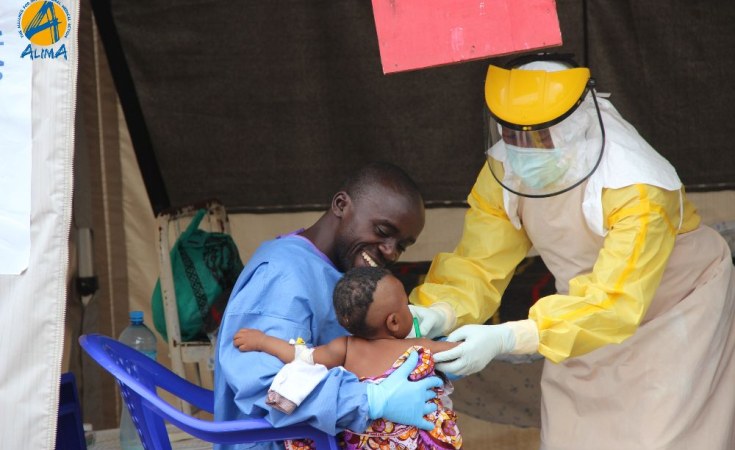 Jennifer Lazuta / ALIMA
At ALIMA's (The Alliance for International Medical Action) Ebola Treatment Center (ETC) in Beni, North Kivu, DRC, a health worker checks the temperature of baby Pascal, who is suspected of having Ebola. Wemba Kambale (in blue), an Ebola survivor, comforts baby Pascal. Unable to be re-infected with the virus, Wemba volunteers his time to help care for children in the ETC, without having to wear "scary" protective gear.
Content from our Premium Partner
35Nord (Paris)

July 31, 2019, DAKAR/GOMA - One year after the declaration of the Ebola Virus Disease in North Kivu, a province in eastern Democratic Republic of the Congo (DRC), the country's largest-ever recorded outbreak of the hemorrhagic fever is still not under control.

As the epicenter of the outbreak first moved from the Mabalako health zone to the city of Beni and then Katwa, ALIMA (The Alliance for International Medical Action) has been mobilized on the ground since August 2018 and, since May 2019, our teams have been witnessing a new peak of the outbreak in the previously affected area of Beni.

Present since the outbreak was declared, ALIMA today manages two Ebola Treatment Centers (ETCs) that receive a large number of confirmed cases. Since August 2018, ALIMA has cared for 5,284 patients (suspected and confirmed) within its centers. Of the 569 patients confirmed to have the Ebola virus in our ETCs, 277 were discharged as cured.

Over the past two weeks, ALIMA has had to significantly increase its capacity to provide care in one of its two Ebola treatment centers. In Beni, ALIMA has never admitted so many patients with Ebola. More than 60 patients confirmed with the virus are currently hospitalized there.

ALIMA, a major player in the response thanks to innovation 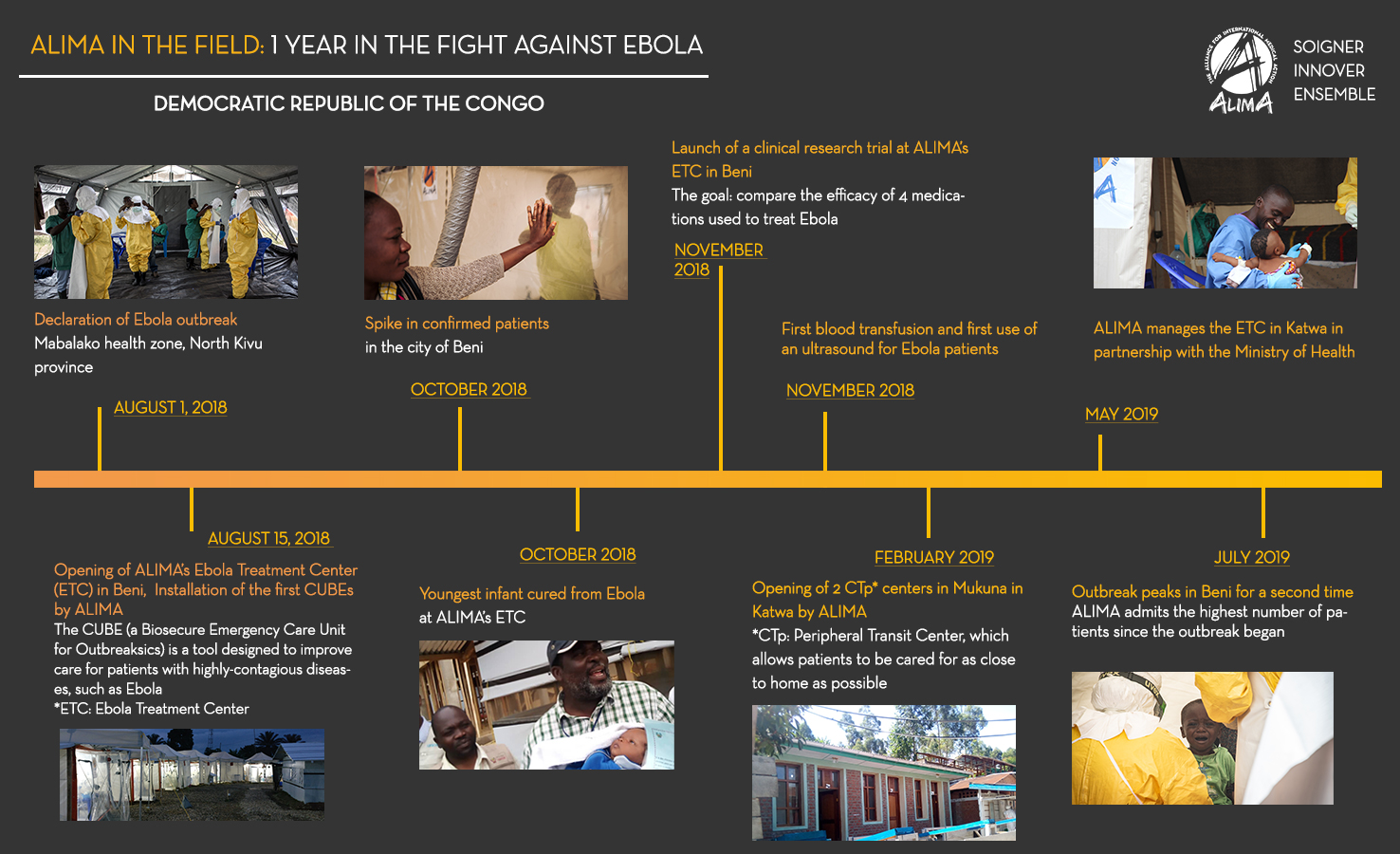 In total, over the past year, 2,671 people have been diagnosed with the Ebola virus, including 1,790 deaths, according to the World Health Organisation.

For ALIMA, an Alliance of African doctors who are transforming humanitarian medicine, intensifying the fight against the outbreak also means developing innovative strategies to treat patients and increase their chances of survival.

Since the beginning of this outbreak, ALIMA has been able to treat infected patients using the CUBE (a Biosecure Emergency Care Unit for Outbreaks), an innovation designed to facilitate the care of patients with highly-contagious diseases, such as Ebola. Thanks to this tool, health workers and hygienists, who are the most exposed personnel, no longer have to systematically wear protective equipment to provide care for patients. These transparent, individual units also humanize the hospitalization of patients by allowing them to remain in visual and audio contact with their loved ones. In total, 24 CUBEs have been set up over the past year.

ALIMA is also a pioneering organization in the use and evaluation of promising therapeutic treatments. New drug care protocols were initiated in the early days of the August 2018 intervention, in partnership with the Ministry of Health and the National Biomedical Research Institute of the DRC, the World Health Organization and the U.S. National Institute of Allergy and Infectious Diseases. Since November 20, 2018, ALIMA has been conducting a clinical trial, led by the National Institute of Biomedical Research, at the ETC in Beni to evaluate the safety and efficacy of these therapies. The conclusions of these tests should be available very soon.

Intensify the response through local populations 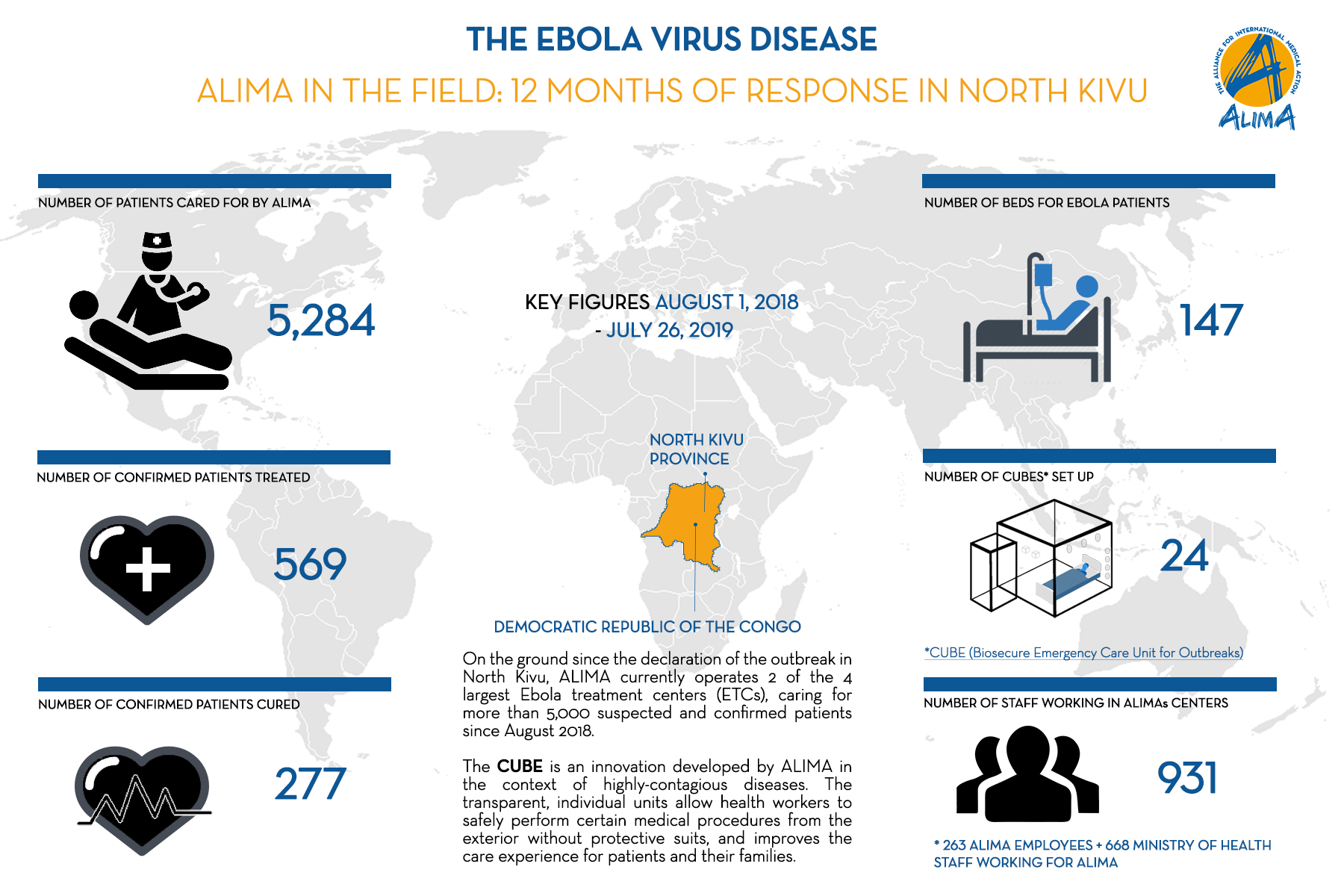 True to its Charter, which places the patient at the heart of its actions, since the beginning of 2019, ALIMA has decided to better involve the population in the fight against Ebola. In addition to its action in support of the two ETCs, ALIMA is now deploying an intervention on the outskirts of Katwa in small referral hospitals, to be as close as possible to the population.

"There, patients are seen in their familiar surroundings by doctors or nurses they already know, which greatly facilitates their care and referral to the Ebola Treatment Center if they are found to be infected by the virus. This evolution in the disease management strategy aims to restore confidence to patients and their families and hasten the end of this outbreak," explains Claude Mahoudeau, ALIMA's Emergency Coordinator for Ebola in DRC.

In an area facing a difficult humanitarian context, where the population suffers from the consequences of conflict, recurrent outbreaks (measles, cholera...) and food insecurity, ALIMA urges the various actors involved in the fight against the Ebola outbreak to take greater account of the vital needs of the population. They must be more involved in response strategies to restore the confidence of patients and their families to finally stop the outbreak.

"Combating the Ebola outbreak poses significant operational challenges, as it is taking place in an area of active conflict that has lasted for more than two decades, but these challenges can only be overcome if, and only if, all efforts converge at the international and national levels towards more inclusive and integrated actions at the community level," said Dr Richard Kojan, intensive care specialist and President of ALIMA. "Our struggle is to promote the union of multiple actors and communities, who are sometimes in opposition, but whose differences should be seen as a strength." 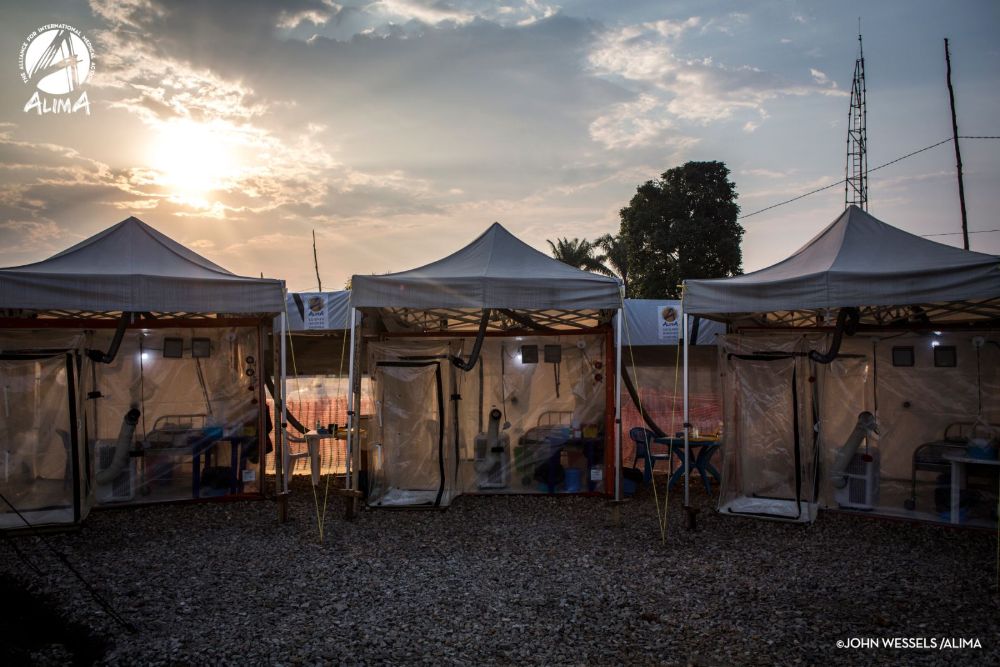 Three of ALIMA's (The Alliance for International Medical Action) innovative CUBEs (Biosecure Emergency Care Units for outbreaks of highly-contagious diseases) are seen here at ALIMA's Ebola Treatment Center in Beni, North Kivu, DRC. Used for the first time ever to care for patients with Ebola, the transparent walls of the CUBE offer a better treatment experience for patients and their families, and the external gloves allow health workers to safely perform certain medical actions, without having to enter wearing cumbersome protective gear.
Photo: John Wessels / ALIMA 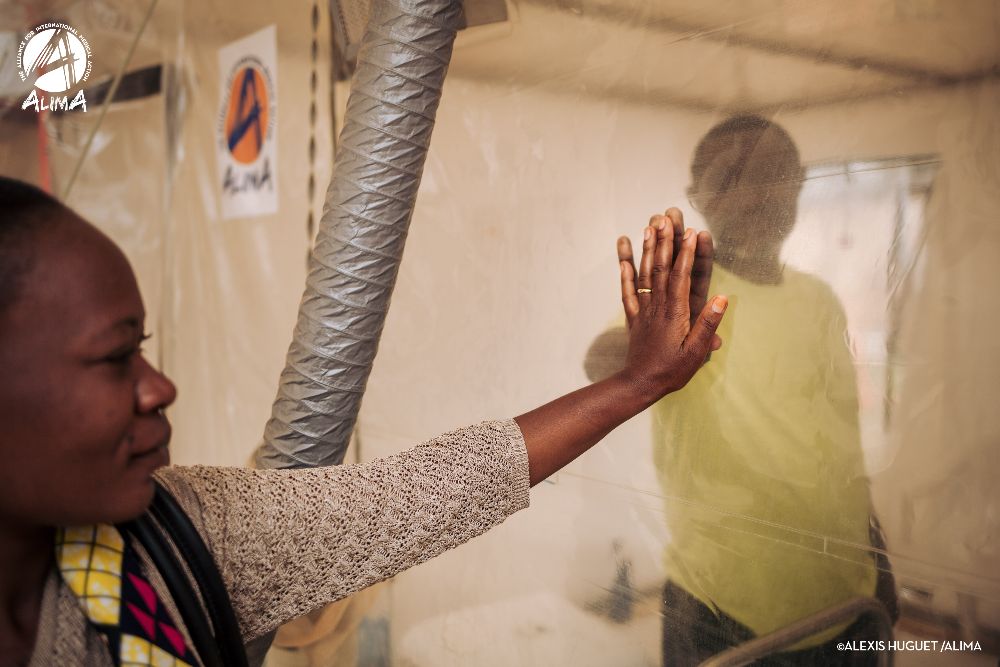 At ALIMA's (The Alliance for International Medical Action) Ebola Treatment Center in Beni, North Kivu, DRC, Philemon Katibale is able to visit and speak with his wife, Safi, who was diagnosed with Ebola, thanks to the transparent walls of the innovative CUBE (a Biosecure Emergency Care Unit for outbreaks of highly-contagious diseases), which offer a better treatment experience for patients and their families, and whose external gloves allow health workers to safely perform certain medical actions, without having to enter wearing cumbersome protective gear.
Photo: Alexis Huguet / ALIMA 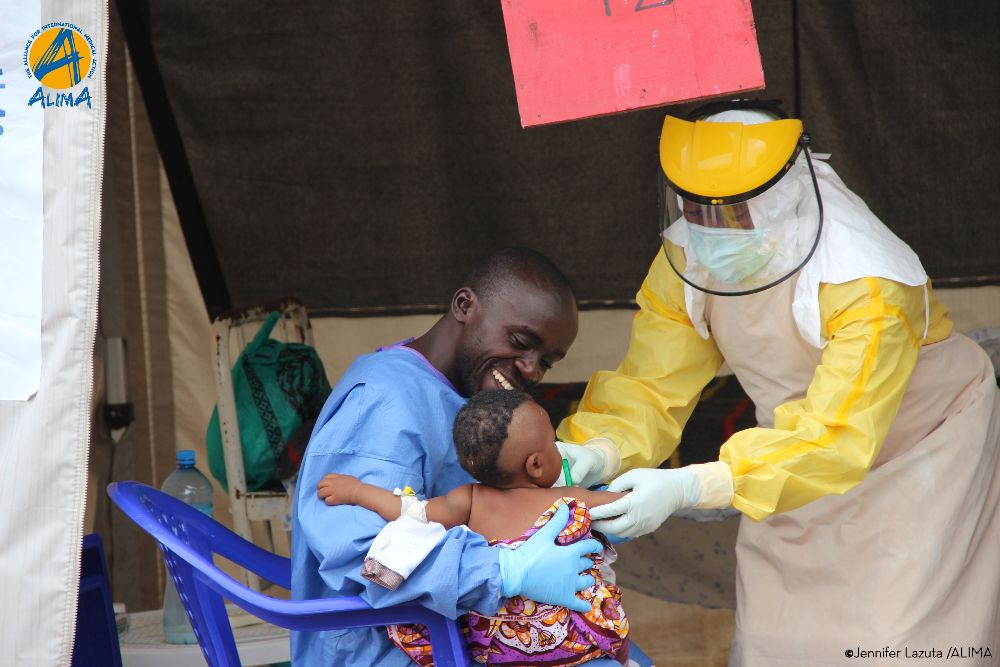 At ALIMA's (The Alliance for International Medical Action) Ebola Treatment Center (ETC) in Beni, North Kivu, DRC, a health worker checks the temperature of baby Pascal, who is suspected of having Ebola. Wemba Kambale (in blue), an Ebola survivor, comforts baby Pascal. Unable to be re-infected with the virus, Wemba volunteers his time to help care for children in the ETC, without having to wear "scary" protective gear.
Photo: Jennifer Lazuta / ALIMA 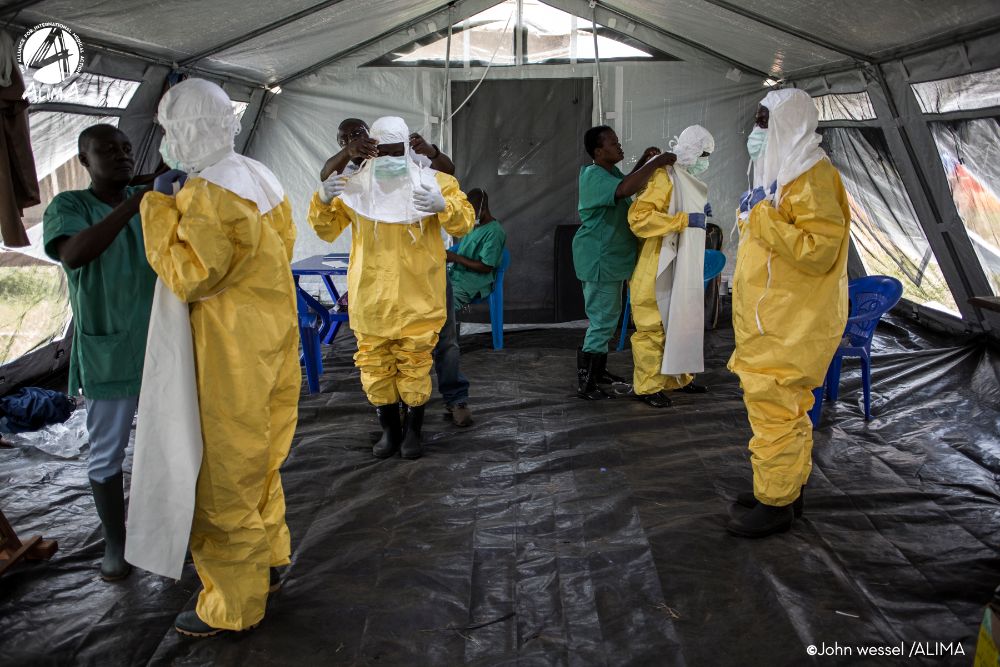 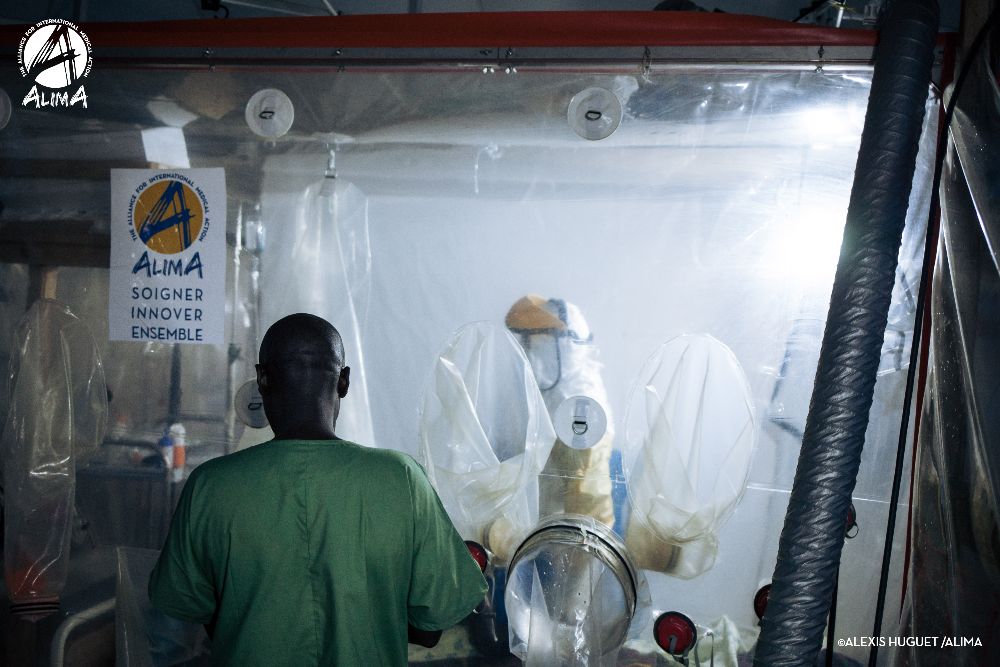 At ALIMA's (The Alliance for International Medical Action) Ebola Treatment Center in Beni, North Kivu, DRC, two health workers consult with a patient being treated for Ebola inside the innovative CUBE (a Biosecure Emergency Care Unit for outbreaks of highly-contagious diseases), whose transparent walls allow for a better treatment experience for patients and their families, and whose external gloves allow health workers to safely perform certain medical actions, without having to enter wearing cumbersome protective gear.
Photo: Alexis Huguet / ALIMA

ALIMA (The Alliance for International Medical Action) is an alliance of African doctors who are transforming humanitarian medicine to provide quality care to the most vulnerable people in emergencies or recurrent crises. Placing the patient at the heart of its strategic vision, ALIMA is based on inclusive governance and works hand-in-hand with local and national medical organizations, and international research institutes. Based in Dakar, Senegal, ALIMA has treated more than 4 million patients in 14 countries since its inception in 2009 and has launched more than 15 research projects on malnutrition, malaria and the Ebola virus.

ALIMA has been present in the DRC since 2011. Its teams are working with the Ministry of Health to provide medical care to local populations, particularly in the Kasai region, where conflict and insecurity have worsened the humanitarian situation. They responded to the Ebola outbreak that occurred in May-June 2018 in Itipo, Equateur province, where a treatment center with 9 beds and 5 CUBEs was deployed. Thanks to its experience in the management of Ebola epidemics in the DRC and Guinea, ALIMA is now at the forefront of the response to stop the spread of the virus, particularly thanks to the CUBE and new treatments.

In 2015, ALIMA received the first prize from the European Union for its action in the fight against the Ebola virus in Guinea.