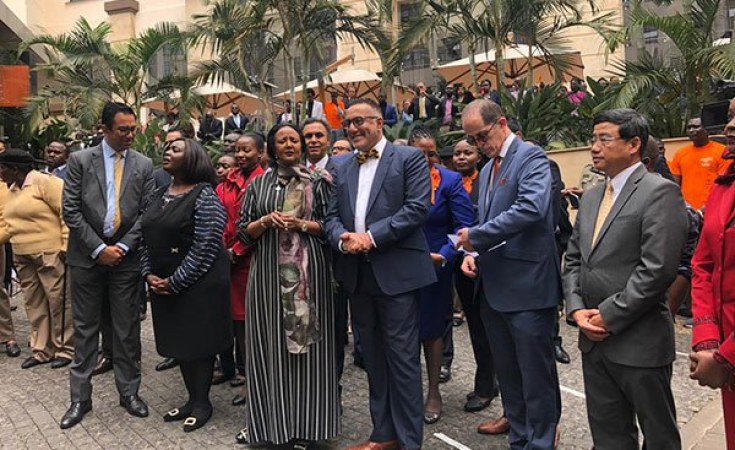 The opening was marked by a series of events Wednesday--to symbolise the resilience and courage--in a ceremony attended by senior government officials, hotel management staff and other invited guests.

"We are back to business," said Michael Metaxas, the hotel's Managing Director after their flag was hoisted alongside the national flag to symbolise the official opening.

Metaxas exhibited confidence despite the harsh economic times experienced in the capital Nairobi in recent weeks, "We are getting a lot of support despite business in Nairobi being low."

The hotel tucked in an exclusive address off Riverside Drive roars back to business some 7 months after the deadly terror attack launched by Al Shabaab terrorists--four of whom were neutralised by security forces hours after their accomplice blew himself up right outside another hotel in the complex.

Its opening was marked by class and sophistication, as the hotel top management received their flag at the Jomo Kenyatta International Airport (JKIA), which was then handed over to two-time World Champion, and World record holder in the 800 metres, David Rudisha.

Rudisha, alongside a team of about 50 runners sprinted from University Way to 14 Riverside Drive, receiving a thunderous welcome by hundreds of hotel staff and workers from adjacent establishments.

On hand to receive the flags at the hotel Tourism Cabinet Secretary Najib Balala and dusitD2's MD Metaxas.

It was hoisted by uniformed police officers as a melodious tunes of the national anthem was played, with the audience melting in patriotism, having prevailed over terrorism.

What was once a battlefield, as security officers battled terrorists, offered unmatched tranquility, with nothing to show the incident ever happened, besides the memories of 21 people killed on that fateful day.

-Bookings streams in as hotel re-opens-

In a show of defiance and resilience, customers from across the world had already started booking the high-end facility, barely hours before it opened.

Metaxas said they had already processed 5 bookings for Thursday.

To attract even more customers, he said the hotel will offer a 20 percent discount for those booking in the entire month of August.

On his part, Balala who spoke highly of the tourism industry in the country said the hotel will not struggle to recover.

While the tourism industry grew by 30 percent last year, he said it was expected to grow further to 40 percent in 2019.

"Nobody will kill the spirit of Kenyans and foreigners from coming to dusitD2," he said, "the government is firmly in charge."

Chief Administrative Secretary in the Tourism and Wildlife Ministry Joseph Boinnet, who headed the National Police Service at the time of the attack, noted that the reopening confirmed Kenya's resilience against terrorism.

"I'm very proud today, that unlike the situation we found, we have bounced back within a short time. We cannot be defeated by terrorists. We're strong and we will defeat them," the former Inspector General of Police said.

It was Boinnet who announced at a news conference from his then Jogoo House office that the incident at Riverside Drive was indeed a terror attack, and kept issuing regular updates as he commanded senior officials from various security units on the ground.

-The face of resilience-

With the re-opening of the hotel, survivors painted a face of resilience and even vowed to allow the past to be, as they soldiered on to the future with confidence.

Capital FM News caught up with Abdullahi Ogello, who escaped death by a whisker, moments after the attack started.

The 36-year-old, who works at the hotel walked past a suicide bomber just seconds before he blew himself up, just outside one of the restaurants, within the 14 Riverside drive complex.

"I am excited to see dusitD2 open after a long time. We are ready to move on with our lives," Ogello said.

The father of four said he will not allow the painful incident, that left six of his colleague's dead deter him from working there.

Though he was shaken, then, Ogello attributed his strength to prayers.

"Security has been heightened and we no longer fear," Ogello said, avoid talk about the vivid details of that fateful sunny afternoon.

dusitD2 has five other investment properties across the world including in Thailand, Bhutan, China, Egypt and Dubai in the United Arab Emirates (UAE).

The January 15-16 attack is the country's latest high-profile terrorist attack blamed on the Al-Qaeda linked Al-Shabaab terror group that has continued to launch pockets of attacks in northern Kenya towns, often targeting security forces in an apparent protest Kenya's soldiers fighting them inside Somalia under the African Union Mission in Somalia.

Nairobi Hotel Reopens a Week After Deadly Attack
Tagged:
Copyright © 2019 Capital FM. All rights reserved. Distributed by AllAfrica Global Media (allAfrica.com). To contact the copyright holder directly for corrections — or for permission to republish or make other authorized use of this material, click here.