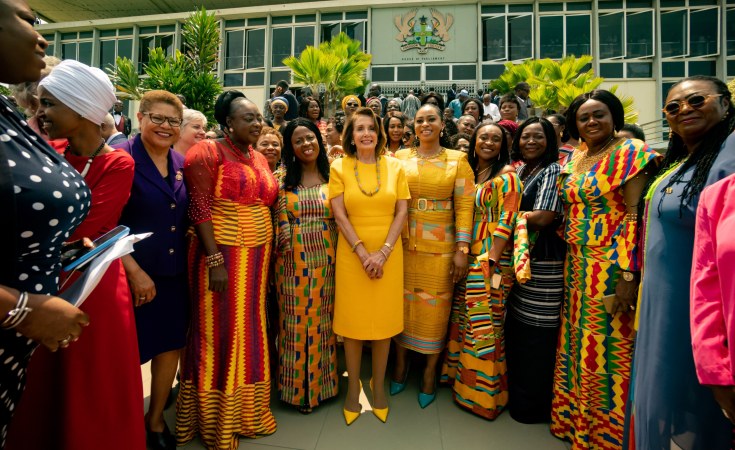 Karen Bass
To travel to Ghana with Members of the Congressional Black Caucus led by the Speaker, the most powerful woman in America, says a great deal about the historical ties between our countries and reaffirms our commitment to Ghana and to the continent of Africa. We have returned, said US Congressmember Karen Bass.
United States House Of Representatives (Washington, DC)
press release

Washington — Yesterday, Speaker Pelosi delivered an address to the Ghanaian Parliament with a message of respect, reaffirming America's commitment to security, freedom and justice for all. The speech marked the first time in history that a Speaker of the U.S. House of Representatives has addressed Ghanaian Parliament.

Led by Congressional Black Caucus (CBC) Chairwoman Karen Bass, Speaker Pelosi and 13 Members of the CBC concluded the historic trip to Ghana with a high-level meeting with Speaker Aaron Mike Oquaye and bipartisan leaders of the Ghanaian Parliament. The delegation also paid respects at Cape Coast and Elmina Castles and the "Door of No Return," to observe the 400th Anniversary of the First Enslaved Africans Landing in America.

"This was a profoundly significant trip for the Congressional Black Caucus," said Chairwoman Bass.  "This year marks 400 years since the first African arrived on the shores of America and we know that after the treacherous journey they began a period of 250 years of enslavement.  To travel to Ghana with Members of the Congressional Black Caucus led by the Speaker of the House, the most powerful woman in America, says a great deal about the historical ties between our countries and reaffirms our commitment to Ghana and to the continent of Africa."

"It was an honor to return to Ghana with the Congressional Black Caucus as we mark 'The Year of Return' and the 400th anniversary of the arrival of the first enslaved Africans in Jamestown Virginia," said Speaker Pelosi.  "The sites we've seen in Ghana are an inextricable part of America's heritage and will forever be seared in our hearts and minds.  Our discussions and engagements with Ghanaian government officials and civil society leaders were key to advancing our shared interests and cooperative efforts to alleviate poverty, eradicate disease, address the urgency of the climate crisis and ensure economic prosperity and security for future generations.  We look forward to building on the progress we have made together and strengthening our friendship to the benefit of both our nations."

Previous Story
'We Have Been Humbled By What We Have Seen' - U.S. House Speaker to Parliament
Next Story
U.S. Speaker , Black Congressional Caucus Observe 400th Anniversary of Slavery At Cape Coast

'We Have Been Humbled By What We Have Seen' - U.S. House Speaker to Parliament

Ilhan Omar Goes 'Back to Africa' - but as a V.I.P.
Tagged:
Copyright © 2019 United States House Of Representatives. All rights reserved. Distributed by AllAfrica Global Media (allAfrica.com). To contact the copyright holder directly for corrections — or for permission to republish or make other authorized use of this material, click here.