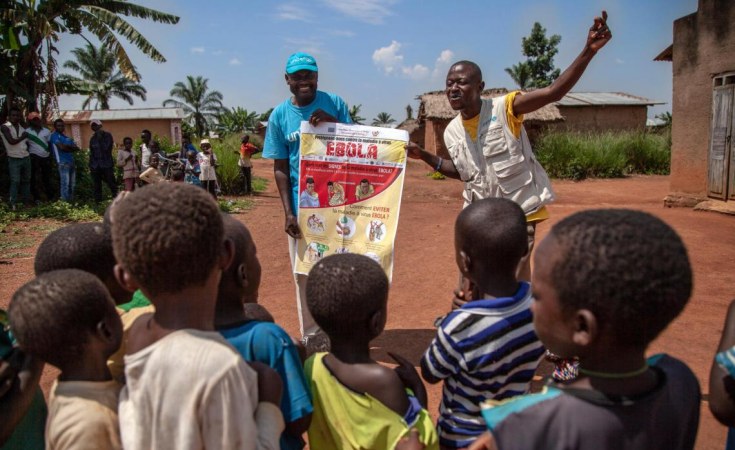 Naftalin/UNICEF
UNICEF Communications for Development Officers talk to children about the importance of Ebola prevention in the Democratic Republic of the Congo.
Thomson Reuters Foundation (London)
By Sonia Elks

London — More help is needed to beat Ebola in Democratic Republic of Congo, humanitarian and medical groups said on Thursday, as they marked a year since the epidemic was declared.

More than 2,500 people have been infected in what is now the world's second worst outbreak of the disease in history.

1. A total of 2,701 people have been infected in the current Ebola outbreak in Congo, of whom 1,813 have died. Almost a third of cases were children.

2. Nearly 150 of the infections have been among health workers and more than one in four of them died.

3. The world's worst epidemic of Ebola, a hemorrhagic fever, began in Guinea in December 2013 and swept through Liberia and Sierra Leone, killing more than 11,300 people.

4. Ebola causes fever, flu-like pains, bleeding, vomiting and diarrhoea and spreads among humans through contact with bodily fluids of an infected person.

5. The average Ebola fatality rate is about 50% - though it has varied from a quarter to 90% across different outbreaks.

6. Two weeks ago, the current Ebola outbreak was declared a public health emergency of international concern by the WHO.

7. The number of cases reached 1,000 in March and has more than doubled in the four months since then.

8. Since early June, the number of new cases notified per week has remained high, averaging between 75 and 100 each week.

9. Several Ebola cases have been recorded across the border in Uganda, while Rwanda is closely watching the recent cases in the Congo's border city of Goma.

10. There have been at least 198 attacks on Ebola health facilities and health workers in the Congo since January, as health workers face a militia violence and local mistrust over the response.

Ebola Preparations Tested As Cases Rise in Goma in DR Congo
Tagged:
Copyright © 2019 Thomson Reuters Foundation. All rights reserved. Distributed by AllAfrica Global Media (allAfrica.com). To contact the copyright holder directly for corrections — or for permission to republish or make other authorized use of this material, click here.