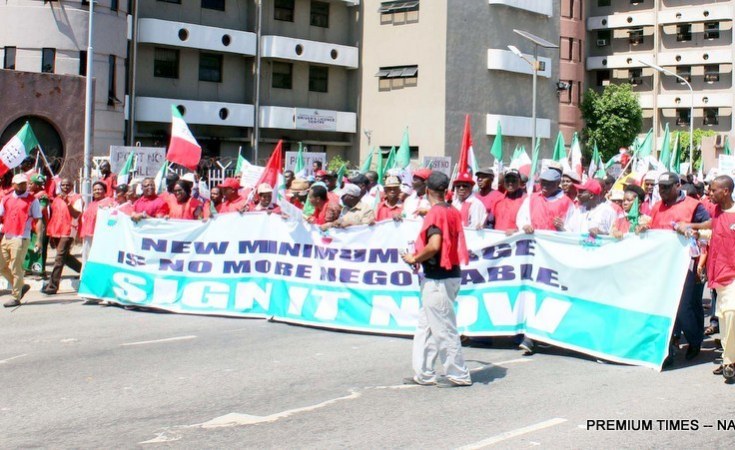 The national chairman of the All Progressives Congress (APC), Adams Oshiomhole, has called on the organised labour to challenge political leaders to ensure that state resources meet the needs of workers and other Nigerians.

Mr Oshiomhole made the call in Abuja at a reception in honour of the director-general, International Labour Organisation (ILO), Guy Ryder.

Mr Oshiomhole expressed concern over the nonchalant attitude of leaders towards improving the lives of Nigerian workers, and said the organised labour must adopt aggressive engagements to change the status quo.

"We have to do things differently about minimum wage," he said, noting that whereas prices of goods and services had gone up astronomically in the country, workers wages have remained static.

"So if every other costs are changing, and labour cost is constant... , somebody is being squeezed," he said.

"Rising crises, stagnant wages, a very miserable lifestyle, and you have to fight for that.

"And we now see in Nigeria the difference between signing an agreement and the challenge of translating those laws, and even the contradiction of signing laws first before getting consultants to tell us how to implement these laws.

"Just to tell you that from inside, I am much more convinced that unions should not only exist, but should have the capacity and ruthlessly deploy that capacity to ensure that the resources of states are dissipated in favour of working people and working families," the former NLC president said.

While commending the ILO for its focus on Youth Employment and Social Justice, Mr Oshiomhole said the focus should also be on aging population and underemployment of young persons.

He said Nigeria ought to do something about its population growth which is at 3 per cent annually, as against 2 percent national economic growth.

"With population at 3 per cent, poverty must be endemic, it is not rocket science, so we need to have conversations on various aspects of society, particularly at what we do differently to get the youth busy," he said.

He urged young people to collaborate to fight poverty by pushing those in government to create the environment for them to think and change the narratives.

Earlier, the ILO DG, Guy Ryder, said Nigeria trade union movements have made great impact in defence of basic fundamental rights in line with the provisions of the organisation.

According to him, the organised labour has also played extraordinary role in building the nation's democracy, saying the consistency was in line with the fundamental values of the ILO.

The NLC President, Ayuba Wabba, commended the ILO for the privilege given to Nigeria to host the Global Youth Employment Forum.

"It is also important in all jurisdictions that without the issue of standards, certainly workers organizations will have nothing to celebrate."

Mr Wabba noted that the rights of workers to belong to trade unions and engage in collective bargaining has put workers and employers on the same pedestal.

"The most profound challenge of the world of work lately was insecurity, uncertainties and impact of technology

Mr Wabba said the NLC would continue to seek ILO's support for capacity building and intervention for Nigeria to be at par with its counterparts, pledging more commitment to the values of social dialogue on minimum wage and other issues affecting Nigerian workers. (NAN)

Contrived Delay in the Take Off of New Minimum Wage

Save Nigeria From Looming National Strike Over Minimum Wage - Labour

Africa's 3 Richest Men Have More Wealth Than Poorest 650 Million
Tagged:
Copyright © 2019 Premium Times. All rights reserved. Distributed by AllAfrica Global Media (allAfrica.com). To contact the copyright holder directly for corrections — or for permission to republish or make other authorized use of this material, click here.