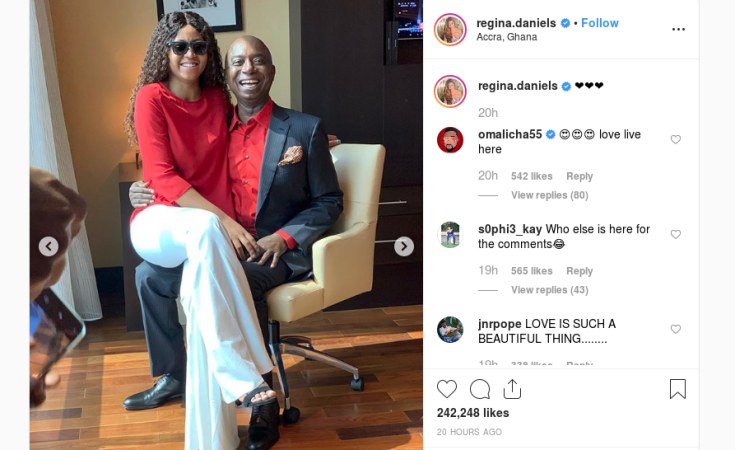 The publicity-loving actress shared their official portraits as husband and wife on social media and also professed her undying love for her 58-year-old beau.

Although the 18-year-old actress had confirmed her marriage in passing on her YouTube channel in June, this is the first time she would be making it official.

The marriage, which was reportedly contracted in April, was widely criticised on social media because of the 40-year age gap between the couple.

Regina, who is currently vacationing with her husband and stepchildren in Ghana, has also given her fans a sneak-peak into her life as a married woman.

For many years, she was recognised as one of Nigeria's finest child stars who won many hearts after she starred in 'Marriage of Sorrow', at age 7.

She, however, shot into limelight when she featured in a Nollywood movie titled 'Miracle Child' in 2010.

She starred alongside popular actors like Ini Edo, Chika Ike and Mercy Johnson in the movie.

Her mum, Rita Daniels, also an actress and chairperson of Actors Guild of Nigeria, Delta State chapter, (AGN), nurtured her to fame.

Regina was famous in the Asaba Nollywood caucus but began to command attention especially on social media after former Vice President Atiku Abubakar appointed her his youth campaign coordinator for Nollywood in January.

Long before she was romantically linked with Mr Nwoko, the actress had become an internet sensation due to her obsession with state-of-the-art cars and tattoos.

It is no wonder that she currently boasts 4.7 million Instagram followers.

Mr Nwoko, on the other hand, has had a long-time affair with the Nigerian entertainment scene having bankrolled some movie projects in the past. The billionaire politician is also financing his wife's latest movie project 'The Enemy I know' which features musician, Naira Marley.

In May 2019, the Independent National Electoral Commission withdrew the certificate of return given to Peter Nwaoboshi, his opponent for the Delta North Senatorial District, and presented it to him.

Mr Nwoko, however, lost out on July 16 after the Supreme Court dismissed the petition he filed against the primary election of Peter Nwaoboshi.

Here are Nigeria's Top Google Q&As for 2019!
Tagged:
Copyright © 2019 Premium Times. All rights reserved. Distributed by AllAfrica Global Media (allAfrica.com). To contact the copyright holder directly for corrections — or for permission to republish or make other authorized use of this material, click here.