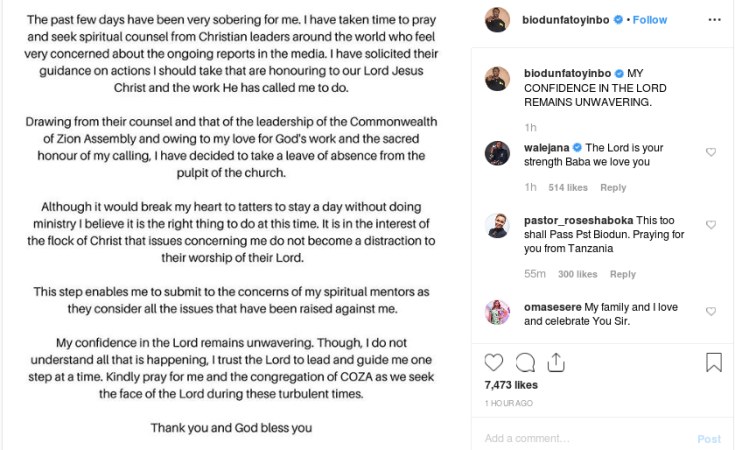 One month after Biodun Fatoyinbo, founder and senior pastor of the Commonwealth of Zion Assembly (COZA) stepped down after being accused of rape, he returned to the pulpit on Sunday.

Mr Fatoyinbo stepped down in July after hundreds of protesters stormed the church's headquarters in Abuja and its branch in Lagos.

The protests were in reaction to the allegation made by Busola Dakolo, a photographer and wife of popular Nigeria singer, Timi Dakolo. Mrs Dakolo alleged that the pastor raped her twice when she was a teenager.

On Sunday, the pastor delivered the sermon titled "Sudden Victories."

Last week, a member of the church's board of trustees, Obafemi Banigbe, also resigned from the church.

Several Nigerians took to social media to react to Mr Fatoyinbo's return to the pulpit.

If only every evil deed happening in this country receives the same attention as #COZA, America will be borrowing money from us now. pic.twitter.com/bOYCRgqPR3

Pastor Biodun back on the altar

Has he been cleared?

Or was the stepping down just a PR strateg#COZA

My advice to #COZA Pastor: Beyond what people say or feel or tweet, you must know you are accountable to God. If these allegations are true, trying to muscle your way through it only fills the cup of retribution. Not because God is not merciful, but because the enemy seeks...

Your Pastor is fake deal with it! Tell him to accept his wrongs and ask for forgives only then will he be forgiven. And he will still pay for his crimes okay? You don't forgive people that didn't ask for forgiveness. Immoral lots!#COZA

Pastor Biodun and his fellow Rapist celebrating him as he stand on the Alter to preach.

If you are member of #Coza and you were here clapping you are Rapist. pic.twitter.com/mQ3vjliwwv

I find it hard to believe that the #COZA Pastor mounted the pulpit and still had the church members cheering him on like a hero! 😮

Religion proves itself again as the biggest brainwashing technique in Nigeria

Timi and Busola Dakolo dont have evidence yet they went on social media to scandalize a prominent person, With their idiots they even went as far as taking placards to his church to stop people from worshipping. Is that not criminal? #pastorbiodunfatoyinbo #coza

#COZA If you cannot become a politician; an APC member, become a Pastor. Even Pastors these days go scot free after *Rape* If you've learnt nothing, learn this!

COZA Church Rape Scandal - Our Lives Are in Danger, Says Musician
Tagged:
Copyright © 2019 Premium Times. All rights reserved. Distributed by AllAfrica Global Media (allAfrica.com). To contact the copyright holder directly for corrections — or for permission to republish or make other authorized use of this material, click here.