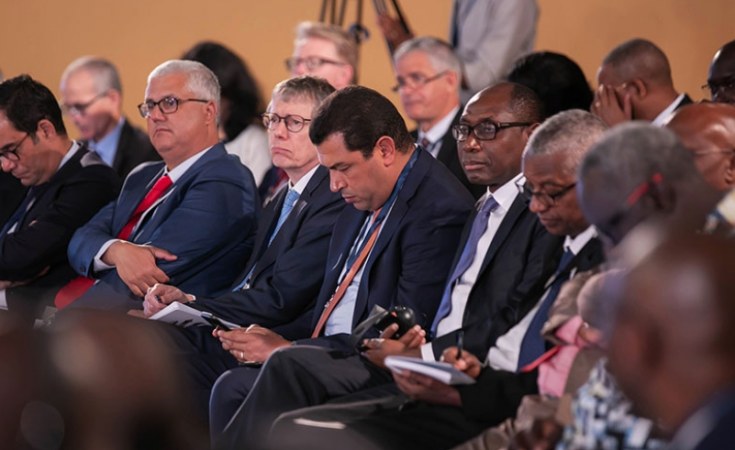 Emmanuel Kwizera/New Times
Delegates follow Gerardine Mukeshimana, the Minister of Agriculture as she addresses the conference in Kigali.
The New Times (Kigali)
By Emmanuel Ntirenganya

A food security crisis looms in Africa, experts and leaders in the agriculture sector have warned, calling for urgent action for the continent to meet its goal to end hunger by 2025.

They made the call on Monday in Kigali during the Africa Food Security Leadership Dialogue--which seeks to stimulate more investment in Agriculture to halt the worsening food security crisis by building climate resilient agricultural system.

Dr. Gerardine Mukeshimana, The Minister of Agriculture, said that; "This meeting is taking place after three consecutive global food security and nutrition reports that constantly show a deteriorating situation of the food and nutrition security in the world and particularly in Africa."

Globally, nearly 821 million people are hungry, of whom 31 per cent are from specifically sub-Saharan Africa, the 2019 State of Food Security and Nutrition by Food and Agriculture Organisation (FAO) show.

The report shows that food crises are caused primarily by conflict and climate change shocks.

Hunger, the report adds, is on the rise in almost all African sub regions, making Africa the region with the highest prevalence of undernourishment at almost 20 percent of its estimated 1.2 billion population.

"This is happening while in 2014, our Heads of State renewed the comprehensive Africa agriculture development programme in Malabo and committed to end hunger, build climate resilient agriculture systems, triple intra Africa trade, invest at least 10 per cent of public expenditure towards agriculture to attain 6 per cent annual growth in agriculture and unlock private investment agriculture by 2025," Minister Mukeshimana said.

The most recent biannual review of African countries' progress towards achieving Malabo goals showed that most of them are lagging behind.

The underlying reason for the lacklustre performance has been the limited capacity of African countries to adapt to climate change in terms of skills, technologies and finances, the minister said.

Sacko Josefa Leonel Correa, African Union Commissioner for Rural Economy and Agriculture, said that 20 out of 47 countries that participated in the biannual review exercise are on track to meet the Malabo declaration to end hunger by 2025.

The worsening food security situation, she said, is facilitated by conflicts and exacerbated by climate change.

She said that it is in this regard that the food security leadership dialogue was organised [to help address the problem].

Hafez Ghanem, Vice President of the World Bank for Africa said that there is need to not only ensure food security but also nutrition security for Africans--which refers to availability of enough and nutritious food.

"We see an increase in extreme weather events like more drought, and more flooding, and this is impacting African agriculture and African food security," Ghanem said pointing out that the bank is committed to focusing on several interventions to help African farmers to be more productive and produce better.