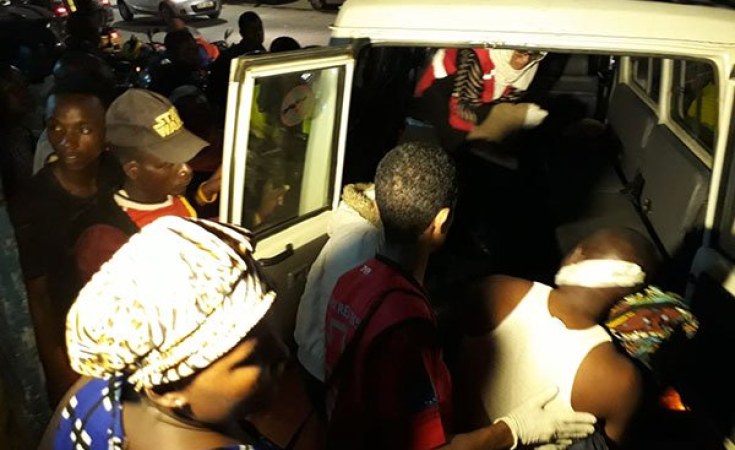 Kevin Odit/Daily Nation
Residents injured by a gang in Mombasa County on August 5 being taken to Yeshua Clinic in Bamburi.
The Nation (Nairobi)
By Mohamed Ahmed

Three suspected members of a machete-wielding gang which attacked people in Kisauni and Nyali constituencies in Mombasa have been arrested.

Police arrested the three during an operation after the Monday night attack where 13 people were injured.

Four among them were in a critical condition and are being attended to at the Coast General Hospital.

Kisauni Sub-County Police Commander Julius Kiragu said the suspected criminals were found with items they stole from victims of the attack.

"The suspects are being held at Kadzandani police post and they will later in the day be taken to Shanzu Law Courts. We are still continuing with our operation. We must deal with these people," Mr Kiragu told Nation by phone.

Police launched a crackdown after the marauding youths went on the rampage attacking people.

The attack brought business in Bamburi Mwisho to a standstill.

Some clubs and stalls which operate until late in the night were forced to shut down their business.

The usual Bamburi night life was not witnessed on Monday as roads were deserted.

Several Injured in Attack By a Criminal Gang in Mombasa

What Will Mombasa Governor Do About Gangsters Now That He's Back?
Tagged:
Copyright © 2019 The Nation. All rights reserved. Distributed by AllAfrica Global Media (allAfrica.com). To contact the copyright holder directly for corrections — or for permission to republish or make other authorized use of this material, click here.