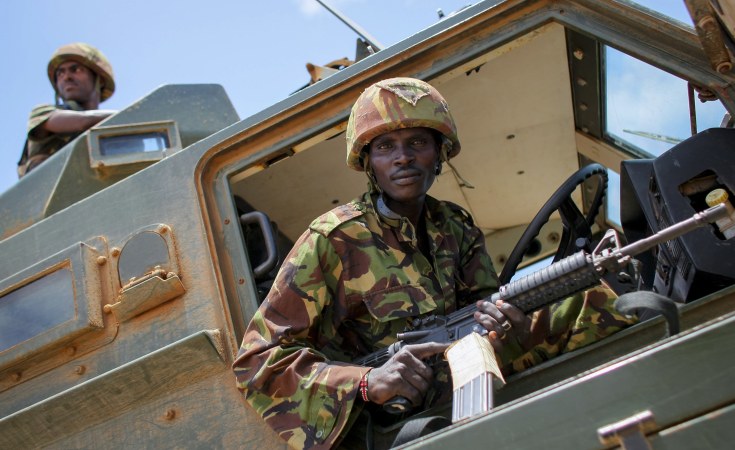 Stuart Price/UN
Kenyan soldiers of the African Union Mission in Somalia are pictured inside their armoured personnel carrier on the grounds of Kismayo University, southern Somalia.
Shabelle Media Network (Mogadishu)

Somalia and the United States have agreed to intensify security operations to flush out al-Shabab militants in the Horn of Africa nation.

U.S. Under Secretary for Political Affairs David Hale, who met with Somali Prime Minister Hassan Ali Khaire in Mogadishu on Monday, also resolved to prepare Somali forces to take over from the African Union Mission to Somalia.

"They agreed on the value of security operations to liberate areas from al-Shabab and preparing Somali forces to take over from the African Union Mission to Somalia," the U.S. said in a statement issued after the meeting on Monday night.

On his part, Khaire briefed the U.S. official on recent political and security developments and Somalia's progress towards meeting the conditions for debt relief that would allow Somalia to resume borrowing from international financial institutions.

Washington and other international partner forces have intensified incursions into territory formerly controlled by al-Shabab after driving the insurgents out of Mogadishu in 2011.

Since 2017, the U.S. military has stepped up air raids against al-Shabab which is trying to overthrow the internationally-backed Somali government.

Al-Shabab controls large parts of rural southern and central Somalia and continues to carry out high-profile attacks in Mogadishu and elsewhere.