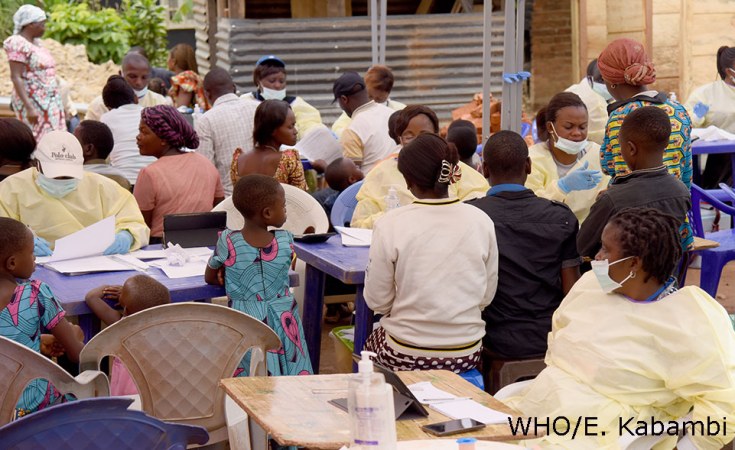 In August 2015 Dr Sakoba Keita, who led the Ebola response in Guinea during the largest Ebola outbreak the world has ever seen, declared:

the Ebola vaccine is a gift from Guinea to West Africa and the world.

This was just after the preliminary results of the "Ebola ça suffit" trial that proved the safety and efficacy of the rVSV ZEBOV vaccine produced by Merck and currently being used in the Democratic Republic of the Congo (DRC). This vaccine isn't licensed but is being currently used on a compassionate basis in the DRC to protect those most at risk of infection.

Back in 2015, some of us felt that his statement was possibly a bit too much considering that the vaccine was not licensed. In addition, we knew from bitter experience that the vaccine was only one part of the Ebola response pillar. Others included community engagement and surveillance.

But since seeing first hand the challenges of implementing another vaccine trial in the same conditions in the DRC today, I appreciate better Dr Keita's words. I also have become hugely appreciative of the courage being shown by the Ugandan Ministry of Health in supporting the launch of this new trial.

Last week researchers from Epicentre, Uganda Virus Research Institute), Mbarara University of Science and Technology and the London School of Tropical Medicine and Hygiene started a new trial in Uganda.

The aim is to provide additional information and to evaluate the safety and immune response generated by a two-dose Ebola vaccine regimen manufactured by Janssen Vaccines and Prevention. The study will take place at the Epicentre Mbarara research centre in Mbarara in the south west of the country. It will last for two years and will include 800 healthcare and frontline workers.

The other reason the vaccine is noteworthy is that it could provide protection against other strains of Ebola viruses. While the DRC is mainly affected by the Ebola Zaire strains, countries like Uganda and Sudan have been exposed to outbreaks by other strains including Ebola Bundibugyo, Ebola Sudan and Marburg virus.

This vaccine could therefore provide larger protection for potential Ebola outbreaks, including those not covered by the rVSV Ebola vaccine that addresses only the Ebola Zaire strains.

The Janssen vaccine could provide an alternative to the Merck vaccine being used in the DRC. This would be ideal as it's critical to have different options to prevent and control Ebola virus disease. This isn't just the case for Ebola: we cannot imagine having only one drug for treating other diseases such as malaria.

The trial in Uganda could also support the DRC in launching its trial on the same vaccine. The recommendation of the World Health Organisation's Strategic Advisory Group of Experts is that the new vaccine should be tested in Uganda as well as in areas of the DRC where no cases have been detected. This will enable the trial to be run without confusing the population with two different vaccines in the same area.

The chances of this happening have increased since the resignation of the former Minister of Health, Oly Ilunga Kalenga, in the DRC. He had raised concerns about the implementation of the vaccine. DRC President Felix Tshisekedi has set up an expert committee to lead the Ebola response, which contributed to Kalenga's departure. Prof Jean-Jacques Muyembe has been named the head of the committee. He was also leading the first implementation of the Merck vaccine in the DRC.

The outcome of the study will be watched with intense interest for a number of reasons.

The first is that it is expected to provide evidence that will enable the vaccine to be registered, opening the door to having another tool with which to fight against Ebola in the DRC and elsewhere.

The second is that the Janssen vaccine could produce stronger and longer-lasting immune responses against different strains of Ebola virus as well as the Marburg virus and Tai Forest virus that affect other African countries.

And the trial will provide new evidence about Ebola virus disease and its transmission, as well as perceptions and attitudes about the vaccine. All of this will be useful in improving the use of the vaccine in the community during an outbreak.

Another important outcome of this trial is the strengthening of research capacity in Africa. This trial is the product of a consortium of scientists from Uganda and beyond. It's being led by two top African researchers - Professor Pontiano Kaleebu and Professor Juliet Mwanga-Amumpaire.

I believe that the initiative will allow African researchers to be on the frontline of the research on Ebola.

As Congo Ebola Cases Rise, a Vaccine Trial in Uganda Is Keenly Watched

Mozambique Stepping Up Surveillance Against Ebola
Tagged:
Copyright © 2019 The Conversation. All rights reserved. Distributed by AllAfrica Global Media (allAfrica.com). To contact the copyright holder directly for corrections — or for permission to republish or make other authorized use of this material, click here.